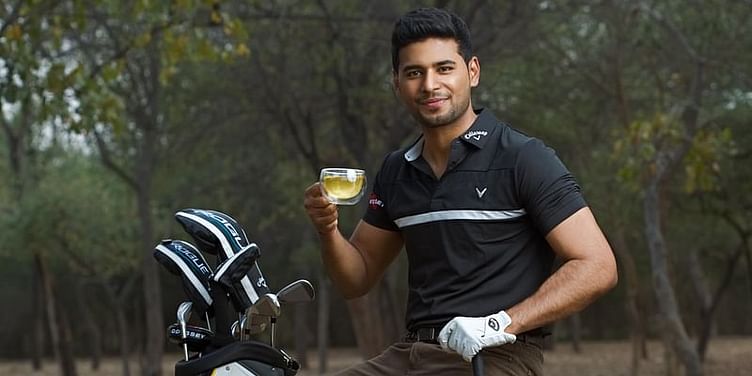 In a conversation with YSWeekender, Bala Sarda, Founder and CEO of VAHDAM India, talks about why he took up his family's tea business, foraying into the American and European markets, and his success mantra.

India has always been a tea-loving nation. According to Statista, Indians are the largest consumers of the beverage, and the country is the second-largest producer of tea in the Asia-Pacific region after China.

Bala Sarda is no stranger to the beverage. The fourth-generation entrepreneur's family has been associated with retailing and exporting tea for around 90 years.

In 2015, Bala diversified and started ﻿VAHDAM India﻿ as an online-only premium tea brand. Its products are now shipped to more than 100 countries, with television producer and philanthropist Oprah Winfrey listing it as one of her favourite things in 2018. Last year, it was also named the 'Global SMB of the Year' by Jeff Bezos.

Today, the tea brand has grown to become a Rs 159 crore revenue business for FY21, with 50 percent of the revenues coming from the US alone. It claims to be India's largest digitally native global wellness brand, taking India's native teas and superfoods to consumers across the world.

In a conversation with YSWeekender, Bala Sarda, Founder and CEO of VAHDAM India, talks about why he took up his family's tea business, foraying into the American and European markets, and his success mantra.

YSWeekender (YSW): What was your childhood like? What are the few things/incidents that shaped you as a person?

Bala Sarda (BS): I was an extremely active and impatient child. My father ensured I was involved in a lot of extracurricular activities outside of my academics.

I also had the entrepreneurial bug, right from my childhood. I remember when I was 10, I had planned to organise a get-together for all my batchmates, with the goal of contributing the profits to charity. I had also worked on publishing a children's storybook. Even when I was pursuing my undergrad, I had two student startups, primarily in the marketing space.

So I was very clear, I would end up starting up something of my own ultimately.

YSW: What was the turning point of your career?

BS: There was no one specific turning point in my life. My early experiences have gradually shaped my career in entrepreneurship at every point.

YSW: What made you take up your family’s tea business?

BS: Even though my family has been in the tea business for four generations, I never thought I would join the industry. From the outside, it looked like a very boring and commoditised industry. And everybody from India was primarily bulk exporting, which was not something that excited me.

It is only after my undergrad that I started researching a few industries and I realised the white space for a native Indian brand for the world. In 2015, I finally decided to launch VAHDAM® India at the age of 23.

The brew that cheers: Here’s why tea is the best beverage for good health, energy and brainpower

YSW: What made you target the US and the UK markets first? Why not the Indian market?

BS: Even though I knew we would launch in India at some point, the majority of VAHDAM’s market was outside. The United States was an easier market to start with, given the language, the open economy, and the customers' openness towards experimenting and trying new things. We formally launched in India last year and the response has been amazing.

YSW: How do you plan to expand your business in the Indian market?

BS: VAHDAM® almost officially launched in India at the beginning of last year. The plan was to take the omnichannel route — both online and offline. However, COVID-19 struck and we had to change our plans. Considering the tailwinds ecommerce has received post-COVID-19, it is going to be a big chunk of our presence. We plan to dive deep into the Indian market in the next couple of years, launch innovative and new products, and become a mainstream tea brand.

YSW: How easy or difficult is it to make a mark in the tea business?

BS: Like in all categories, starting a new business is hard. The tea category was even more crowded and cluttered, hence differentiating the brand and making available an exceptional product was critical. That is what we focused on right from day one.

YSW: If not the tea business, what would VAHDAM have been?

BS: Definitely a consumer brand in some other category of products.

YSW: What differentiated VAHDAM from the rest of its competitors?

BS: India grows the finest teas, herbs, and spices. Native Indian wellness wisdom, i.e., Ayurveda, Yoga, etc, has become a global phenomenon. However, we had no Indian brand taking it to the world. Right from day one, we wanted to build a homegrown, native Indian brand, as we believed that could create trust with consumers.

Secondly, our supply chain — right from the farmers in India to consumers in various countries — helps us make available a high-quality product with high margins and strong control over the entire experience.

Thirdly, we stick to our motto - ‘Do Good By Doing Good’. VAHDAM® is certified carbon neutral and plastic neutral brand. We direct one percent of our revenue towards the education of our tea grower’s children under our social initiative, TEAch Me.

We have also partnered with edtech startup BYJU’s and committed $100,000 towards the academic programme, which is now being made accessible to the tea grower’s children, absolutely free.

BS: Oprah is an inspiration for millions around the globe, and is also a huge chai lover.

We were thrilled and honoured to know that she found her favourite chai tea blends in the VAHDAM® collection. Oprah Winfrey drinking and endorsing our teas was a great validation for the brand.

YSW: What is your favourite tea from VAHDAM’s collection, and why?

YSW: What does it take to be awarded the Global SMB of the Year by Jeff Bezos?

BS: It was an incredible feeling to receive the ‘Global SMB of the Year’ from Jeff Bezos himself. And a great validation of our vision to take India global. Incidentally, I have always deeply admired Jeff Bezos and his style of working.

YSW: What are your hobbies?

BS: I’m a fitness enthusiast and end up working out regularly. I also love playing golf, a sport I picked up during the lockdown. I also love catching up with friends every now and then.

YSW: Who is your inspiration?

BS: My father has been a great inspiration of mine. Apart from him, I am inspired by Jeff Bezos and Elon Musk.

YSW: What is your most prized possession?

YSW: The lockdown provided even the busiest people time to try things. What was your lockdown like?

BS: Once the lockdown struck, it took a short while to get used to the idea of the entire team working from home. Fortunately, for the ecommerce sector, COVID-19 was a boon and it received tailwinds. So, there was a lot of work to be done.

Initially, I was working crazy hours. However, with time, I started to manage better. I set up a mini gym in my room and got all the essential equipment, and have been very consistent with my workouts since then. This was a blessing in disguise. I picked up golf as a sport last year. I also started reading a lot more than I used to before.

YSW: What are the few tips that you want to share with aspiring entrepreneurs?

BS: Consistency and perseverance — keep doing the right thing, day after day. It will eventually work out.

YSW: How do you manage your time? Share a few tips to help people manage time better.

BS: Prioritisation, effective time management, and delegation has been my personal hack for managing time better and maintaining a work-life balance. I also start my day early. I set an hour or two almost every day in the morning to work out. To sustain the intensity of this job, it is extremely important to have a healthy mind and a fit body.

“Be yourself; everyone else is already taken.”: Akshay Narvekar, founder Bombay Shirt Company