Meet Iman Allana, founder Bollyglow, who is empowering the beauty sector, one lipstick at a time from her office, designed by Gauri Khan

Fashion maverick and entrepreneur Iman Allana, in a conversation with YSWeekender, reveals her daily skin-care regime, what fashion means to her and how her company is combining Indian pop culture and beauty aesthetics.

Iman Allana, daughter of Dubai-based billionaire power-couple Irfan and Lubna Allana, has more than one feather to her cap. A Masters in Luxury Brand Management from Regents University, Iman is the founder of Mumbai-based beauty brand Bollyglow.

Founded in 2018, Bollyglow is a channel for Iman to realise her childhood dream of empowering women through businesses.

"It's been a blessing to have been exposed to business from a young age. My earliest memories of 'office' were playing there after school and being allowed to skip class to attend an important meeting!" recalls the 26-year-old founder.

Always fuelled by curiosity and desire, Iman did a host of short educational courses. Her stint at Cambridge University to get an ‘Intro to Silicon Valley and Culture of Startups,’ and a ‘Vogue certificate’ at the Conde Nast College, led her to the path of entrepreneurship.

Given the backdrop of a large family business, Iman says her parents have been very encouraging. "Which is a feat as I am the first woman to be running a business as the sixth-generation family member," she says.

Bollyglow - as the name suggests, is a fusion of Bollywood and Beauty. The brand is cinematically inspired right from its packaging to visual merchandising in retail to how the products are named - the eye shadow palette is called 'Behind the Scenes' and they are soon launching their 'Filmi Foundation' range.

"Our tagline suggests that the brand is a firm believer in 'The star in you', which is guided by the faith that every woman is a star in her life - her movie, " says Iman.

Born with a view to ‘Democratise beauty,’ Bollyglow was built to represent Indian pop culture and beauty aesthetic on an international playing field.

“As a country housing half a billion women, we are yet to create one global beauty brand. As the only 100 percent imported homegrown beauty brand, we strive hard to work with the best suppliers that service luxury beauty brands,” says Iman.

Bollyglow sources its ingredients from across the world. Its products are tailored to cater to the subcontinent's skin and environmental requirements.

Iman's favourite products from the brand include the ‘corrector concealers’ and the ‘SPF Primer’, that she claims to regularly use.

Take care of your skin

"A simple yet diligent skincare routine is - cleanse, serum and hydrate and always top it off with SPF to protect you from the sun and harsh lights," Iman advises.

The fashionista believes that skin is the true reflection of one's inner health and advises that it is important to stay hydrated and avoid the lure of greasy, fried food.

Besides catering to women’s beauty needs, Bollyglow also empowers women through their business. The company is soon launching its affiliate sales programme to enable women to earn. She is launching a platform in Q1 of 2020 where women can earn an additional income by being advocates of the brand.

Currently, team Bollyglow has six women in its team and is preparing to enable a host of female interns to join in summer, next year.

Recently, Bollyglow launched its office which was designed by Indian film producer and designer - Gauri Khan.

Fashion is an art form

Iman keeps moving between cities London-Dubai-Mumbai for her work. Besides being an entrepreneur, she is also a social worker, and investor. She is currently in the Supervisory Board of Bollyglow’s parent company – Allana Investments and Trading Company. Iman is an investor in companies StyleCracker and social ecommerce company, Goxip.

Passionate about the business of fashion, Iman is also a part of the British Fashion Council.

"Fashion is an art form, a sense of creative expression. It is more than apparel - fashion is being truly confident, unique and owning whatever you do. I love how beauty and fashion industries have a constant desire to change, evolve, reinvent, entertain and inspire," she says.

According to Iman, the Indian beauty market is greatly aided with the rise of micro-influencers and social media. Additionally, she says that there is an increasing appetite for beauty consumption.

"Customers are also a lot more aware nowadays and want to know what goes inside the products that they use. As a brand, we have taken a call to be vegan, cruelty-free, and have launched a range of sustainable eye shadows that are 100 percent recyclable and for skincare, we will emphasis on natural ingredients as well,” Iman adds.

The family funded company Bollyglow's business model is built around modern trade - partnering with retailers like Shopper's Stop and Lifestyle.

The company also works with prominent e-tailers including Nykaa, Myntra, Flipkart and Amazon.

According to Iman, Bollyglow is exploring subscription-based models as well.

Recalling her days of starting up, Imam says, “No number of management courses or business school can train you for launching your own business. It is very hand on, literally like having a baby!”

With customers in Bollywood and beyond, Bollyglow is eyeing to close FY 2019-20 at Rs 10 crore across online and online platforms. Going ahead, the brand plans to foray in bigger segments of general trade, starting from Q2 2020, while keep growing in modern trade and online portals. Additionally, Bollyglow will be exploring the Middle East by next year.

Beauty and the best: How Dr Bharti Taneja embraced beauty with her venture Alps Beauty Clinic a... 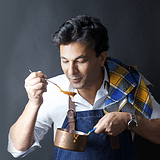