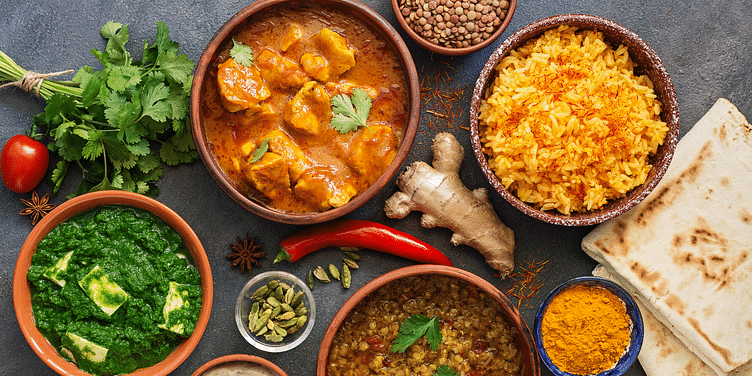 Despite his many medical problems, chef and author, Suvir Saran is determined to make authentic Indian food popular across the world. His new book, ‘Instamatic’, which is a collection of 80 photographs and 80 essays, will be out soon. Here’s what this brilliant chef has to say…

Chef, entrepreneur, author, Suvir Saran returned to India after severe health complications, which included a stroke, partial blindness, loss of speech and motor skills. The illness was direct fallout of the closure his ambitious restaurant, Tapestry (serving a combination of flavours from world cuisines), a labour of love and thought. The New York – based restaurant had to shut shop just 10 months after its opening, a shock that he couldn’t come to terms with.

After two years of treatment and a recuperation period, he is back in business, making Indian food sexy, with a renewed focus on mindful eating. He not only practises mindful eating but subtly serves healthier options and portions to his diners. At his restaurant, today he may serve fried chicken to his patrons but only with healthier whole grain red rice risotto, thus guiding them in the right direction, without attempting to lecture the diner.

Suvir has just opened The House of Celeste, a 120 - seater modern Indian food restaurant in Gurugram (Haryana), a short distance away from the buzz and hype of Cyber Hub, which does brisk business serving office-goers and families alike. He will also be bringing out a new book of essays and photographs soon.

Suvir, a graduate of visual arts from Sir JJ School of Art, Bombay, feels that it is a coming home 'moment' with this fresh start. He has lived most of his life in New York where he had gone as a 20-year-old to study at the School of Visual Arts.

His culinary journey commenced when he was “embarrassed to call the food that we found in Indian restaurants there as Indian.” He explains “What we found in restaurants in New York was greasy, heavy and uninspired food such as Dal Makhani, Butter Chicken, Butter Paneer and the likes that no self-respecting Indian would serve, let-alone eat. I would cringe when I saw that food.”

“To showcase the real Indian food, I started cooking up a storm and having a party every night after work where everyone was invited,” says Suvir.

The chef himself loves to eat home-made, Indian food. When asked to tell us about his favourite dish, he elaborates, “I like ghar ka khana. The food that I consume depends on where I am waking up in the morning or where I am eating in the evening. It comes from an Indian home kitchen. It is fresh, exciting, light, sustainable, mindfully prepared without fancy equipment and it does not have butter, cream, or oil and is cooked with the mind and heart. In olden times we did not have the luxury of buying so much dairy or so many types of oil. The food that is served nowadays is a by-product of affluent living.”

The Hall of Fame

Word soon spread that there was a young kid who cooked the best Indian food at the best parties, and one thing led to other. One day, Elisabeth Bumiller of The Washington Post connected with Saran to cater the food for her marriage anniversary with Steven R. Weisman, the White House correspondent. And the rest is history.

Suvir’s boss at The Metropolitan Museum of Art fired him as the Merchandise Director and gave him two years severance pay to do what he enjoyed most - cooking. That was the beginning of his catering business, Rasoi, The Indian Kitchen.

Towards the Michelin star

Suvir was the Executive Chef at the now-shuttered Indian restaurant Dévi, in New York City. It was the first South Asian restaurant in the United States to receive a Michelin star, the hallmark of fine dining, in the very year that the first New York Michelin guide book came out.

At the restaurant, Suvir served food which was the epitome of Indian home cooking. "It was a defining moment, for me. I took what the grandmothers were doing forever and merely gave it a place on the plate for the others to savour", Saran says, modestly.

His inspiration to cook and create dishes comes from everyday life itself. Creating dishes is an ongoing process for which can neither be planned nor curated. Inspiration comes in flash or a moment and becomes a dish, just like that.

A new lease of life

In 2017, when Suvir suffered 7 concussions and had a difficult time with his health, his partner of 17 years, Charles and his mother decided that Suvir should move back to India to recuperate.

“As my health got better, I realised that India gave me a new lease of life. All my life, I've thought I would do something in India, but every time, I never had the patience to execute my ideas. This time round, I launched The House of Celeste as my way of giving back to the country,” says Suvir.

"I am discovering that there's so much happening in India, culturally and food wise, that it is hard not to get affected. Ours is a nation in flux, and awareness is on the rise. It is thus a good time to be here.”

So, has India shaped his food philosophy?

“I follow a very simple food philosophy. To keep the food costs at 25%, labour at 40% and 100% pride and in this case, proudly Indian. I believe that distance makes the heart grow fonder. It was distance that made me fond of Indian cuisine. Distance also gave me a very different perspective on Indian cuisine than most chefs working in India, for which I didn't train formally," he says.

For the love of India

Suvir celebrates Indianness in all aspects of his work. He loves Indian warmth and hospitality - the experience of the old Indian way of dining out in the open. Thus, his brief to the designer for The House of Celeste was to get the outside in.

There are floor-to-ceiling plants, colourful wallpaper with birds and animal motifs adorning the walls. There are long open kitchens where one can visually experience the food being cooked and served by a bevy of pleasant staff. Even his brief for hiring his chefs was to create a professionally rich work environment with a minority-centric team with women in leadership roles to break the glass ceiling.

"To do things more disruptively my team is getting younger and diverse. Our Chef de Cuisine, Vardaan Marwah was a pastry chef in his previous role. The current pastry chef, Blossom, was a supervisor in her earlier role at a five-star hotel conglomerate, and it would have taken years to reach at this point," he says.

Doing up your home soon? These design trends are likely to dominate 2020

At the moment, Suvir has his hands full. With his partners Amit Katyal, the man responsible for getting Suvir on track with his culinary journey in India and Animesh Rao of Cucina Hospitality, he now plans to open five to six bespoke, well-curated restaurants in the next year.

They will begin with a bakery in Delhi, a restaurant in Goa, an Indian restaurant in Singapore, and another exclusive 20 to 30-seater restaurant which he says will be the "Temple of Indian Food".

"For my partners and I, it very important to provide value for money to our patrons. Not just India, but the world is experiencing tough economic times. So where and how we spend money, matters immensely. We want to show people that we respect your money, we respect that you chose us to dine with, we appreciate your business, and we want to give you the most value for your money,” he explains.

Suvir is also a successful author, and has written some bestsellers like Masala Farm, Indian Home Cooking and American Masala and on the anvil is a soon to be out book, close to his heart "Instamatic - A chef's deeper, more thoughtful look into today's Instaworld."

The book is a collection of 80 photographs, 80 essays and Suvir’s musings which he penned on his iPhone, when he was legally blind due to his illness.

Shashi Tharoor has written the foreword for the book, a part of which reads, "The pictures and his word-pictures seen separately and together, share a perspective at once unique and thought-provoking".

Most celebrity chefs start small in India and make it big elsewhere in the world, Suvir Saran is singing a different tune, attempting to cater to the Indian palate after having wowed world diners. Will he make the cut?

From 10 orders a month to 15 orders a day: the extraordinary rise of Outbox, the Kolkata-based surprise planners