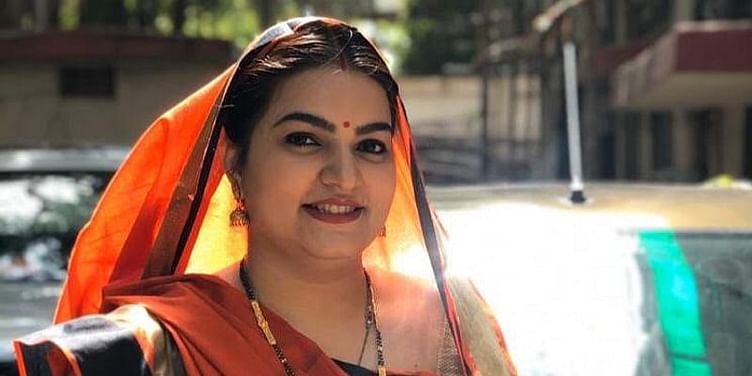 Social media influencer Snehil Dixit Mehra gained recognition as BC Aunty. She has recently bagged a role in the second season of ALT Balaji and ZEE5’s web-series Apharan.

Right after the nationwide lockdown to curb the spread of Coronavirus in India, TV actor Snehil Dixit Mehra took to Instagram to put her 'comedian' hat on. The social media influencer, popularly known as BC (Bheri Cute) Aunty, gained recognition for her relevant one-minute videos, across social media platforms.

Her video on ‘Class of Heroes’, where Snehil appreciates the work of actor Sonu Sood, who was recently in the news for helping migrants return home, received immense appreciation. In fact, the actor himself shared the video on his Facebook account.

“There is nothing more relevant than COVID-19 right now. Since the beginning, the idea was to post funny one-minute videos and see how people react to them. I received several messages and when I realised that the character resonated with people, I decided to do two more of them,” Snehil told YS Weekender during a recent conversation.

Snehil has been recently making headlines for bagging a role in the second season of ALT Balaji and ZEE5’s web series Apharan.

A second child to her parents, Snehil says that she kind of had the ‘middle-child syndrome.’ While her parents provided the best of education and equal opportunities to their children, when Snehil looks back, there was only one hindrance in her childhood.

“As a female I was always taught to stand up for myself. However, growing up, I was told that eventually I would need to get a professional degree and find a good match,” she recalls. And that was the only difference between her and her brothers’ upbringing. “Because of that, I was studying to marry better, and never to become something myself,” Snehil says.

Growing up, Snehil was extremely clear about what she wanted to do. When only six or seven-years old, she was sure that she wanted to become a news anchor. “That was my dream and I was very set on it. I would practise reading news in front of the mirror,” she says. However, like any typical Indian father, Snehil’s dad asked her to get a professional degree first, and then follow her dreams. Thus, Snehil was educated to become an engineer and was hired by a corporate in her final year of engineering.

“At the end of each day, I would get food coupons for the next day and Rs 200 for the day’s work. And that was more than enough for a college student,” she recalls. And since then, there was no looking back.

After CNBC Awaaz, Snehil interned with a website called Business of Cinema as a reporter. “I found it very interesting and did it for a year but I also had to pay my house rent,” Snehil says. It was then that she started interning with a production house.

Since she has a knack for writing, Snehil considers herself a better writer than a performer. “Writing has made me believe that one can make a difference by sitting behind the camera as well,” Snehil says.

One thing led to another and in 2018, Snehil bagged a role in AltBalaji’s web series Apharan, for which she was also the Creative Director. She had a 17-seconds part and that itself went ‘viral.’ “It was surreal and I enjoyed it for a while,” she says.

Her story so far

It was after this overnight success that Snehil’s friends told her to start an Instagram page and further explore the character. In July last year, Snehil created her Instagram page with the name BC Aunty.

“I waited for six months (after the release of Apharan) thinking about what people would say. I was married, I had a child and now I wanted to become an influencer,” Snehil says. It was her husband who supported her and told her that people would talk no matter what.

Starting with film and web-series reviews, Snehil created characters that are not only relevant, but also close to her heart. One of her characters, Prabha, is that of a news anchor. Her latest character, that of a class teacher, resonated well with the audience, and has been making rounds on social media.

On being asked how she manages to stay relevant, Snehil says, “Relevance comes when you keep a track of what is trending. Sonu (Sood) did a great job and it was relevant. Movie reviews and webseries will continue to remain relevant.”

Snehil doesn’t see anyone as her ‘direct competitor.’ “I am good at writing scripts with punches, it is an extension of my personality and nobody can take that away from me,” she says.

Snehil believes that being an influencer comes with its own set of responsibilities. She says that an influencer’s job is very similar to that of a journalist.

“I have been seeing a trend on social media about how it becomes a fad if somebody makes a religious statement or comments about politics -- it is either black or white. But as an influencer, just like journalists, one has to stay away from making statements,” Snehil says. Her content mostly revolves around comedy, entertainment and all things relevant. Snehil avoids imposing her political or religious views on her viewers.

Ever since the beginning of the coronavirus pandemic, brands have been discussing minimising their marketing budgets. Snehil says that individual influencers whose revenue model depends on making money out of promoting brands, will be affected by the economic downturn.

Having said that, Snehil says, “Brands have to realise that the one thing working right now is promoting their products through social media influencers. It is the easiest and best approach to Ideally, brands should be pumping in more money into this industry,” she says.

On the current narrative on cyber bullying, Snehil says that while internet trolls can be extremely annoying, it is often a cry for help. As a social media influencer, she has often been criticised for things not related to her profession -- “I have been called moti (fat), and people have commented ‘Ghar jao, roti banao,’ (Go back home and make bread) on my posts,” she says.

Snehil, who manages her social media profiles herself, says that initially she used to ‘Give it back’ to her haters. However, recently, she has discovered how trolls are faceless and often “direct their anger on something else, towards me.”

Snehil believes that now is the time for women in comedy to take the centre stage. Stating examples of influencers like Mallika Dua, Kusha Kapila and Dolly Singh, Snehil says getting rid of the ‘woman’ tag as a comedian and actor will eventually happen. “2020 mein nahi, toh 2030 mein hi sahi (If not in 2020, then in 2030),” she says.