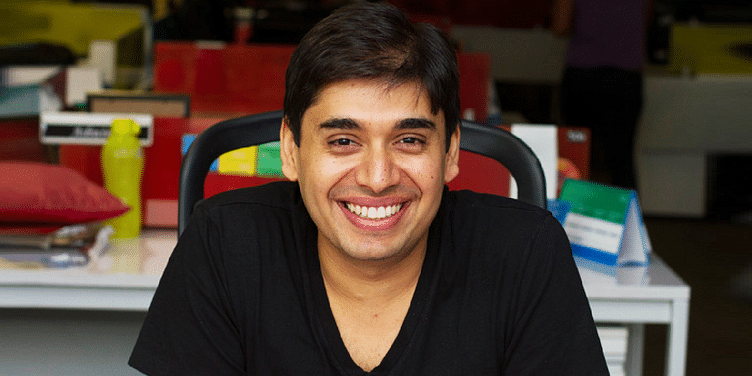 You can’t define Naveen Tewari in a word or two. He dons multiple hats, and not many

adjectives can do him justice. He is an IIT-ian, Harvard graduate, entrepreneur, angel investor, startup mentor and cricket lover, and is best known as the Founder-CEO of India’s first startup unicorn, the mobile advertising platform, InMobi. Bengaluru-based Naveen is an eloquent speaker not just on stage, but also in conversation with

Work – that’s the first thing that comes to my mind. Happiness is something that gives you energy and keeps you going. There is a purpose to it. For my mother, raising her children gave her happiness. For me, it is work.

Not having a purpose. They say that if you don’t work, you age faster. It keeps you occupied, helps you go about your day, and not having that is my fear. I also fear the loss of loved ones.

I am quite dogmatic. I don’t think I am a balanced person. I am acentric; that is my comfort. But I think I should not be so acentric. For instance, I don’t believe in balance between work and life. It doesn’t serve any purpose. You should be centric about life, or about work.

Giving up – and the lack of determination. Another is not having the self-belief that you can do something.

Jeff Bezos – in the world that I live in, he has created something phenomenal in an industry which is very commoditised. He has done it very systematically. He built an empire and

I have some 12-15 pairs of shoes. I do have some gadgets too. I use them for a while and then forget about them. My whole house is automated for light, music etc.

I am very enthusiastic and optimistic about InMobi in general. I see the future of the company. We are going huge, and we are doing it without making headlines. It’s being done systematically. We are creating the largest story out of India. That excites me.

I love myself. I am very okay with my appearance. I’ve never explicitly thought about it. I am losing hair though I just touched 40.

I don’t think I despise anyone. Why would I spend my time thinking about someone I despise?

These questions should be rewritten. Why would we differentiate between men and women? I won’t answer this question. It’s not right.

My kids and InMobi. I think of all three as my children.

When and where were you happiest?

At the birth of my daughter. I was in the labour room. When they gave her to me, it was unbelievable. She is my first child. She was born around the time I started InMobi. Both are 10 years old now.

If you could change one thing about yourself, what

I don’t like my dogmatism. But I won’t change it. What will I change? (thinks)

My greatest achievement is taking a tech company from India, global. At some level, being able to get many other entrepreneurs to say that they can also do something, even if it happened unknowingly.

I feel blessed to have received affection from people who work around me. I live in the glory of it and bask in

the vastness of that affection. It grows every year.

Being unable to go after my purpose.

If not an entrepreneur, being a

cricketer. It is a little ahead of being an entrepreneur.

Being there without any expectation or agenda.

Ironman – human, but advanced in technology, built to get to the next level.

Nobody. I think I am making history.

My father. Most of what I do today happened because of what my father did. He is a professor and rose to the top very quickly in his field. That was the outcome. It is the input I looked up to – he had a purpose, backed it with exceptional hard work. He grew everyone around himself; he did not sit in an ivory tower.

What are your favourite names?

That’s an absurd question. I don’t know the implication of the question. I never thought about it.

The state of not believing in yourself

Peacefully, and not troubling anyone. I want to die while working, not while waiting to die.

Everyone has the ability to change the world. You just have to not give up.