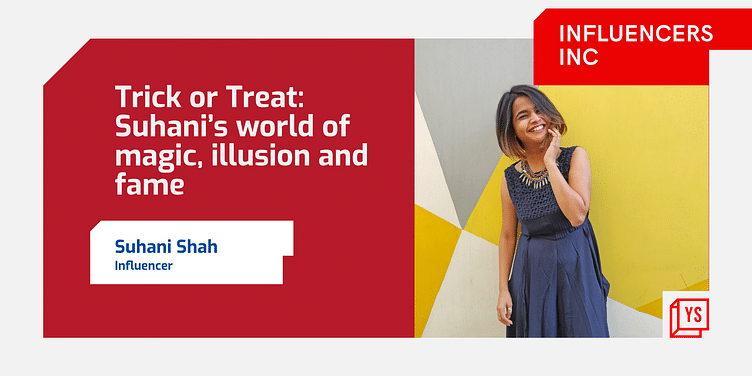 In a recent conversation with YourStory’s Influencers Inc, Suhani Shah, who is a mentalist, talks about her journey in the content world and discusses where magic will take her in the future.

The content creation world, where people from every possible genre have found an audience, Suhani Shah has established a name for herself with her magic performances.

She is a mentalist, illusionist and magician who has gained tremendous popularity on the internet.

While speaking about her journey as a magician, Suhani shares that like every other kid, she too was fascinated by the art of magic at a very young age except that she actually wanted to perform magic.

Meet Sakshi Shivdasani, who's building her fan base on a foundation of humour and fashion

“I don’t come from a family of magicians or anything even mildly related to entertainment so it took a really long time. It took us about 10 months to find people, prepare a show and too much drama happened in the process to be able to process this but then we did it and I did my first show when I was seven years old,” she says.

Suhani explains that mentalism is a specific genre of magic and it is one of the many genres that magic offers — illusions, street magic, parlour magic and so on.

In her opinion, it is not advisable to directly start with mentalism as it requires some level of expertise and showmanship.

“Mentalism is an artform where you have very little support. You do not have props,” she shares.

“I feel that nobody should directly start with mentalism. They should pick up any other genre first, master the art of talking, presenting, build more confidence and then if they are interested in mentalism, move towards it,” she shares.

She shares that she started performing online during the pandemic when the entire world came to halt and performing live wasn’t a feasible option.

“Just to maintain my own sanity, I started live streaming on YouTube because that was the only way I could talk to people from my room,” she adds. Suhani built a relationship with her audience through the process.

When asked about future plans, Suhani declares that she is not somebody who plans too ahead in life.

“Sometimes we can do a lot more than what even we can imagine so I don’t want to limit myself to my own thoughts and I want to do a lot more,” she says. She however says that whatever she does, it would be associated with people. Suhani is also going international for the first time as well.