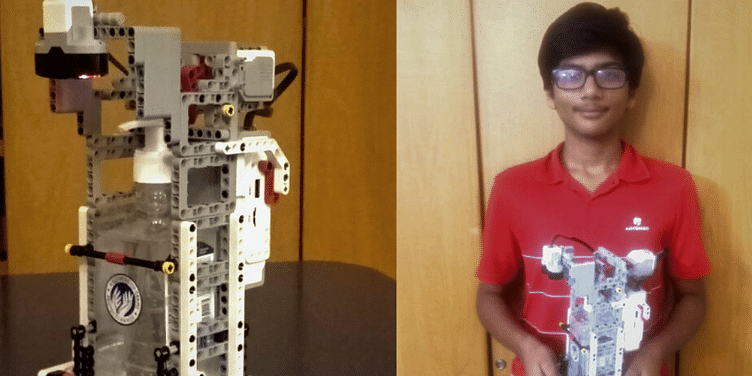 Krishn Gupta, class 8 student, decided to do something innovative when he noticed a number of people at home touch the same sanitiser bottle. He wanted to provide a solution to contain the spread of the highly infectious coronavirus disease.

Using sanitisers, washing hands and wearing PPE during the COVID-19 pandemic are the only things that are keeping us shielded from coronavirus during this unprecedented time, while we wait for a definitive vaccine to be released.

Sanitisers that contain an alcoholic base are 95 per cent effective when it comes to killing germs, bacteria and reducing the microbial count on surfaces.

But, 14- year-old Krishn Gupta noticed that while it is important to sanitise the hands, a number of people still go about touching the same bottle, especially amongst family members.

Thus to fix this issue he came up with a ‘No-Touch Hand Sanitiser Dispenser’ that lets you keep your hands clean, and prevents you from having to touch the bottle and infect the surface for others.

This dispenser is excellent for hospitals and offices, as well as other large public settings and can be mass-produced.

In an exclusive interview with YS Weekender the young teen talks about his inspiration and motivation when it came to creating the ‘No-Touch Hand Sanitiser Dispenser.’ Here's how he went about constructing the model, for which he received immense support and praise from his family and friends.

YSW: What made you come up with the idea of the ‘No-Touch Hand Sanitiser Dispenser'?

KG: I thought of designing the ‘No-Touch Hand Sanitiser Dispenser’ because ever since our Prime Minister announced the lockdown, my grandfather kept telling our family that we should not touch anything and we should always sanitise our hands.

Now we are even using it at home. And I feel that such a product will be really useful for hospitals, shops, stores, banks or any other public places where people gather in large numbers.

YSW: How did you go about building the dispenser?

KG: The concept used is very simple. First, an ultrasonic sensor senses any object (a hand in this case) when it comes within a range of 12 cm of the sensor.

After that, the motor, which is on the robot, moves an arm, which then pushes the knob of the dispenser downwards and lets the sanitiser out.

I have made the physical robot design on my own, without copying any other design, using Lego Mindstorm EV3 pieces; and I have written the code myself and programmed it using the 'LEGO MINDSTORMS Education EV3' software.

I was also mentored and guided by my Robotics Teacher, Deepti Reehal Ma'am, from Let's Learn Robotics, from whom I am currently studying Robotics, and under whose guidance, I took part in the 'World Robotics Olympiad (WRO)' competition last year.

YSW: Who was the target audience you kept in mind, while creating your product?

KG: Initially the target audience was my family, since I was designing it for my family to use. Later, when the product took shape, I realised that this concept and design could be used by anyone and everyone, who needed to use Hand Sanitiser Dispensers, especially where two or more people are using the bottle.

YSW: Can it be replicated and mass-produced in bulk? If so how?

KG: Yes, it can be replicated and mass-produced in bulk. Though, for doing that a company engaged in manufacturing similar products, will have to make a prototype using my design and concept, but by using cheaper material such as wood or metal, which will be commercially viable for mass production, and by putting the code of the programme in a chip. The current concept and design have been created using Lego Mindstorm EV3, the pieces of which are quite expensive.

YSW: What was the response like of family members and friends who have tried your 'No-Touch Hand Sanitiser Dispenser'?

KG: My family members, who have tried my No-Touch Hand Sanitiser Dispenser', were absolutely thrilled and excited to see this product.

They were extremely proud of my achievement. They kept using it again and again, even when their hands were clean. The happiest person was my 7-year-old brother Uday, who was the 'Little Helper' for me while I was developing the 'No-Touch Hand Sanitiser Dispenser'.

YSW: How did Let’s Learn Robotics help you?

KG: I have been learning robotics from Deepti Reehal Ma'am, Founder of Let's Learn Robotics.

I have also taken part in the 'World Robotics Olympiad (WRO)' competition last year under her guidance, with her as my WRO team's coach.

Currently, she has been giving us ideas and activities to engage us meaningfully, and build our creativity as well as imagination.

She has been sharing robotic challenges with us on a regular basis, to keep our creative minds ticking. One of the challenges, she also gave us was to make an autonomous hand sanitising dispensing system, which provoked this idea in my mind.

YSW: Are design, experimenting, and building something you are passionate about? And if so, do you plan to take this up in your higher studies?

KG: Yes. I have been extremely passionate about design, experimenting and building new things from a very young age.

I started taking robotics classes at the age of 9 years. I have been taking part in International competitions like World Robotics Olympiad (WRO) and First Lego League (FLL) for the last 4 years.

I am definitely looking forward to take up 'robotics' as a subject in college and my parents are supportive of this decision of mine.

YSW: With the Covid-19 lockdown how is it affecting you as a student? Do you have to take online classes from home currently?

KG: I study in Inventure Academy, Bangalore. My school declared holidays as soon as the scare of COVID 19 started.

Initially, we had to take our Grade 8 written exams, online. Currently, the school is not having any online classes going on. They are conducting an online summer camp of cricket, for which I have enrolled.

I have also enrolled for multiple online classes from external academies. I am currently taking online classes such as Public Speaking Course from Chatterbox, Classes for coding of apps and games from ﻿WhiteHat Jr﻿, Online physical training sessions from ﻿Cure.fit﻿, and Online course on 'Scientific Thinking in Real Life' from University of Queensland, Australia.

YSW: What are some of the other things you have designed or plan on designing in the future?

KG: I have recently designed a 'Phone Protecting Case’, which helps you to safeguard your phone when you leave it unattended.

I am also working on a concept currently wherein only authorised people will be able to open certain doors, without touching the door, by just showing their palms (as an access key) to a sensor which will be attached to the door.

YSW: What do you like doing most on the weekends during your free time?

KG: I love to play video games and cricket during weekends. I am very passionate about cricket and I am currently a part of my school's cricket team and a club team called Swastic Union Cricket Club. I also know how to do origami and I am in expert in solving Rubik's Cube.

Go green: Here’s why sustainable fashion is the need of the hour