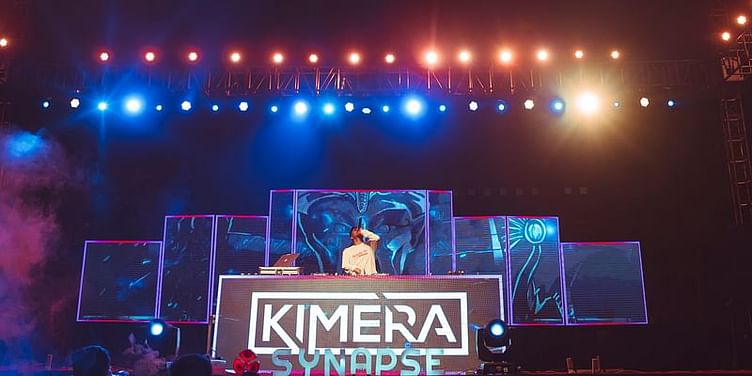 DJ Kimera or Pratham Mehra reveals what it takes for an outsider to thrive in the music industry, how he signed an international label and how he pursued music during the time of the pandemic

Pratham Mehra, who goes by the name of DJ Kimera, recently released his single debut ‘Fight for Ya’, along with music producer Abbas Kagalwala. Fight for Ya, which talks about the emotional journey of fighting for someone who you truly love, was released on Generation Smash, a label by DJs Dimitri Vegas and Like Mike.

Pratham’s journey has been full of roadblocks and challenges. From convincing his parents, to overcoming a life-threatening injury, and being rejected by 13 music labels, Pratham launched Fight for Ya after three years of countless revisions.

In an exclusive interview with YS Weekender, Pratham speaks about his journey of fighting for himself, his challenges along the way, and the joy of finally tasting success.

Born to a businessman family in Mumbai, becoming a musician was never a part of Pratham’s plans. Being an only child to his parents, Pratham’s childhood was a mix of moments of being pampered and being kept grounded.

Growing up, he wanted to pursue cricket. “I wanted to represent my country at the national level,” says the 21-year old who has always been passionate about the sport. While still a teenager, Pratham would practise hard in order to represent his school at cricket. During one of the practices, he pulled a muscle and injured his lower back. He was, however, determined to chase his dreams, and continued playing for the next couple of years, until the injury worsened to the extent that he was prescribed complete bed rest.

“Music came along during the toughest time of my life, when I saw my dreams of being a cricketer shatter,” Pratham says. He was advised to discontinue playing cricket if he ever wished to walk again.

“I was completely heartbroken because cricket was my only passion and the one thing that I was good at. I felt like I had lost my life’s purpose until I discovered my love for music and the piano lessons I had taken as a child came back to save me,” recalls Pratham.

As his interest in music grew, he enrolled himself at the Lost Stories Academy to learn music production. As he spent time composing music all night and taking music production classes during the rest of the day, he missed most of his college classes at the Mithibai College of Arts and Commerce.

Pratham was eventually debarred from giving his second-year exams, due to low attendance. He dropped out of college in 2018 to pursue music full-time.

“My parents initially did not accept the idea of pursuing music as a career option and always asked me to treat it as a hobby,” Pratham says.

But as luck would have it, Pratham managed to secure a score for Carbon, a Dadasaheb Phalke Award winning Bollywood short film featuring Nawazuddin Siddiqui, in 2018.

“Eventually my parents came around and, made peace with my career choices and that sense of validation made me confident to work on my new set of goals,” he remembers.

Pratham’s latest single, Fight for Ya, is inspired by his own journey.  He began working on the song as one of the demo projects at the Lost Stories Academy with Abbas, and it later went on to become a full-fledged track.

It is about the emotional journey that you have to undertake when you decide to fight for someone you truly love. The song articulates the feeling of doing one’s best and having no regrets if things don’t turn out right. “This song feels more like a journey to me because it reflects my struggle as an artist. It is about fighting for myself, my dreams, and finding a new purpose in life,” he says.

In the last three years, Pratham has not only received appreciation for the song, but also rejection from multiple people. The track was initially rejected by 13 labels, but that did not stop Pratham from working on his music.

“My musical journey began with trying to discover myself. As I am from a non-musical background, I had no knowledge of what it takes to create a melody or a song. And the toughest part was to understand music in the first place,” he adds.

After several versions and countless revisions over the last three years, Fight for Ya was released earlier this month and Pratham considers it his ‘stepping stone’ to where he ultimately wants to be. “Even if I don’t make it, I have no regrets because I can’t say that I didn’t fight for myself’,” he says.

Signing an international label this early in one’s life, more so, when one is an outsider in the industry is no cake walk. Pratham says that to thrive and finally taste success in the music circuit has taught him one important lesson:

“Building meaningful connections in this industry is as important as being good at making music. Hard work definitely gets you where you’re bound to reach, but a good network just takes you there faster.”

Pratham is now focusing on producing original music, as all his releases so far have been official remixes for international artists like Tigerlily and Lost Stories. He has created a bank of tracks that he has been working on over the last two years and he plans to release them soon.

Pratham reveals that earlier in his life, he took inspiration from electronic music artists like Martin Garrix, Tiesto, and Hardwell. “I still look up to them but I have also expanded my palate to newer artists like Lauv, The Chainsmokers, and The Weeknd,” he adds.

Besides these, Pratham seeks inspiration from his producer friend Somanshu Agarwal.

Like every sector of the economy, the music industry has been affected by the coronavirus pandemic. Live shows, which are one of the major revenue sources for artists, have completely come to a standstill and making ends meet have become difficult for musicians.

“Virtual concerts are still in their infancy, and even though a lot of platforms are doing e-shows, their economics are not still in place yet and monetisation continues to remain an issue,” Pratham says.

However, on the flip side, quarantine has not been a productivity challenge, he says. “We do not have any excuses to procrastinate anymore. It is also a reminder to take more care of ourselves, our mental health, realise the importance of taking a break, and check on our loved ones,” he adds.

Pratham consumes as much music as possible, to keep up with everything that is working and not working, in the music circuit. He studies music and artists from all genres.

“It is important to know that music these days isn’t just a MP3 file, it is an amalgamation of various elements like artworks, marketing strategies, social media creatives, videos and so much more,” Pratham says.

Besides being dedicated to his work, Pratham is a follower of cricket and football. If not in his studio, one can find him glued to his PlayStation, playing F1 or FIFA. The artist is a sneakerhead and has a vast collection of sneakers.

On being asked about future collaborations and plans, Pratham says, “It might be a little far-fetched at the moment but I want to work with Martin Garrix because he is one of the youngest artists out there to change the dimension of electronic music.”