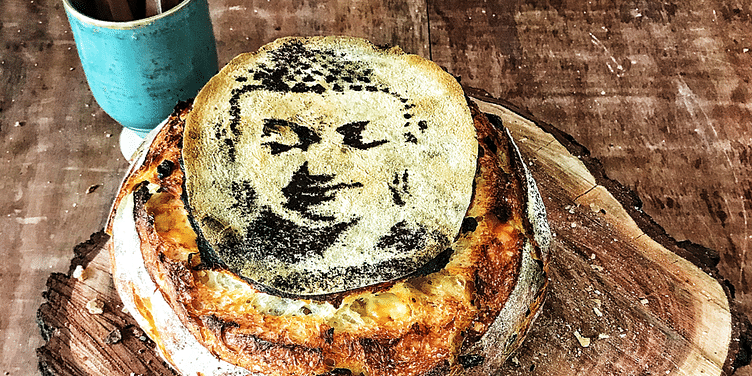 When Sujit Sumitran discovered the beauty and flavour of sourdough bread, he demystified this complex and time-consuming process of baking sourdough bread for others via his workshops. After Covid-19 struck globally, the master baker launched an ongoing online workshop.

Goa-based bread boss, Sujit Sumitran, 59, has been baking sourdough bread for almost a decade and has evangelised sourdough bread making, which is perhaps the oldest form of leavened bread in the history of mankind.

Sourdough is slow-fermented bread made with three basic ingredients – flour, water and salt, activated with the magic of wild yeast and bacteria present in the environment.

At a time when not many were baking sourdough, Sujit broke new ground among people baking with commercial yeast. He demystified this ‘seemingly’ complex and time-consuming process for others to understand via his workshops. And since then, Sujit had been conducting successful pan-India workshops before Covid-19 struck globally.

Belgium-based Puratos Sourdough Library recently invited him to a meeting of the Centre for Bread Flavour, with 14 other sourdough bakers from across the world to be part of an experiment. All the invitees used the same starter but their own flour to bake the bread which was tasted by bakers in Belgium.

Making sourdough requires mixing flour and water and letting the micro-organisms do their magic and slowly ferment the mixture. This happens over a period of anywhere between five to ten days. What one gets at the end of the exercise is a ‘starter’ or a ‘mother culture’ used to bake sourdough.

Sujit reminisces about the beginning of his starter journey and says, “I remember making my own starter, but I didn't give it the time that it needed. So, I did the next best thing and wrote to people whom I admired and someone shipped me two of his starters all the way from Nevada and thus began my sourdough journey."

Covid-19 induced restricted movement coupled with non-availability of everyday items (something as simple as yeast), presented Sujit an opportunity to spread his wings further. He began teaching people to be self-sufficient by baking their own bread.

People too had ample time on hand to learn a skill, being locked up in their homes. Baking sourdough required time, patience, and practice and the lockdown was the perfect opportunity to try their hand at something new.

"Earlier I would restrict my sourdough teaching workshops to a batch of ten because of space constraints, but now thanks to technology, I am able to communicate with larger groups seamlessly," says the master baker, while on a break from an ongoing online workshop.

A devout foodie, Sujit also runs his own consulting firm in the leadership development space. As his practice left him with ample leisure time, he started toying with the bread machine that he had gifted his wife.

"Initially it was fun experimenting with different ingredients but soon the excitement waned as the bread machine was extremely constrictive; one had to just put the ingredients in it and the machine would do its work. It was not really a creative tool," says Sujit. "I then chanced upon a couple of recipes that required finishing bread on the slab, post kneading in the machine. I started playing with that and the final frontier was sourdough," he adds.

A self-taught baker, Sujit attributes a major chunk of his learning process to experimenting and seeking advice from posting questions to online forums and social media. "People have been generous with their knowledge and advice. Their advice was important to draw my own learning chart because the flour, the equipment, and the climatic conditions are different in our country. And each of these has an important role to play in baking sourdough bread,” he adds.

The secret of artisanal bread making

While it is true that one can make and bake a good sourdough with only three ingredients, a lot more goes into its making - for instance, choosing the right flour. While people in India have been baking with regular All-Purpose Flour (APF) and the whole wheat flour available in the open market, Sujit stresses on the importance of using whole grain flour for sourdough.

"Fundamentally, Indian flour is good for making flat breads but not leavened ones like sourdough. A good gluten structure is required for baking leavened bread, but regular Indian flour does not yield the desired results," explains Sujit.

“With regular flour I ended up with gummy and dense bread. But lately I have been experimenting with a flour from TWF Flours, which is made up of 50% ancient grains for flavour, a good amount of modern wheat flour for gluten, and some barley to create that special bread where the crust shatters in your mouth and the crumbs hold instead of turning mushy," he reveals.

A legacy born out of passion

Sujit has been baking bread for the joy of baking. When asked about the craziest flavour of sourdough bread he has baked till date, he says, “I’d think my 100% Whole Grain with dried Seaweed sourdough bread would be the most interesting one I created. I tend to bake based on whatever ingredients are readily available but the one I like the most, is just plain sourdough bread, with no additions.”

In fact, Sujit has never sold his bread commercially. But the requests from his followers and fellow bread lovers keep pouring in. So, for some time he ran a bread barter programme wherein, in exchange for his bread, people would get him their own handmade creations. It is not surprising then that he goes by the moniker "the bread whisperer".

Sujit has also made his much sought after paid online course, ‘Easy Peasy Artisan Sourdough Bread’ available for free in the current situation to encourage people to experiment with baking sourdough bread.

Unlike the West, where bread is a way of life, in India, bread is something we buy commercially at cheaper prices. Sujit has been making a dent with his knowledge about the technique of artisan bread making.

For the enthusiastic bakers out there, he shares some pearls of wisdom, "Find a solution and stick to the path. Start with APF based breads. It is easier to work with them than with whole grain flours. This will help strengthen your technique and you will be able to replicate it subconsciously as well."