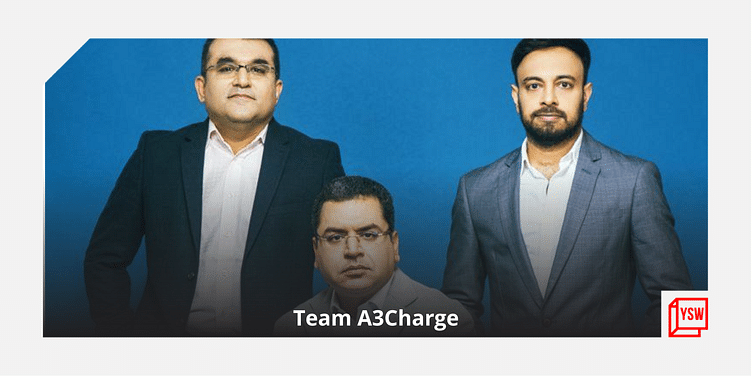 Delhi-based A3Charge provides power bank rental service that allows you to charge your devices through a rental portable charger, which can be returned after use by paying a minimal subscription fee.

Imagine the scenario – you’re heading home after a long day at work and you get a flat tire. You sigh and reach for your phone, but the battery is dead. Then you reach for your power bank, only to discover that is dead too. Frustrating right? It no longer has to be, because now you can rent phone chargers on the go with ﻿A3Charge﻿. The Delhi-based startup was launched in October 2020 by Manu Jain, Sameer Papneja, and Sahil Gupta.

“Our product is aimed at eliminating low battery troubles that are faced by almost everyone. Since we spend a lot of time on our phones, tablets, iPads, and use earphones, AirPods, and headphones all day long, the batteries can get low very quickly. As an alternative to carrying multiple chargers and power banks around, we introduced A3Charge,” explain the founders while chatting with YSWeekender.

The three co-founders have much in common - an engineering background and a zeal to solve the common problem of low batteries, which they often faced themselves.

Manu has a degree in Mechanical Engineering and Sameer and Sahil have experience in the fields of Industrial Production, Software Engineering, and Project Execution.

“We wanted to make it convenient to recharge a gadget or device for as many consumers as possible. We hope to become the primary source of charging instead of being a secondary one, as more people start depending on our product," says Manu.

"Interestingly, many mobile companies have stopped providing chargers with their devices. But we still need to charge our phones! We aim to become an alternative that a consumer can utilise very easily. They can pick a charged power bank from anywhere, use it, and return it, rather than buying a new charger or a new power bank,” he adds.

Since the problem and A3Charge’s solution is a universal one, the team hopes to move beyond Delhi-NCR with time. The startup began in Delhi to test the concept’s success in a smaller sample market. After conducting several market and consumer surveys, both pre and post-launch, their indicators showed them the feasibility of their idea, and prepared them to take the next step towards expansion, which they hope to kick off soon.

The team currently consists of 25-30 people, and they partner with various outlets to keep their products. “We follow some basic rules and principles in picking our vendor partners, as we provide vending units to them free of cost, so the safety of the equipment is very important. Other factors include footfall at the venue, and whether our target audience lives in the vicinity,” says Sameer.

A few of their machines have advertising screens, and they are open to the idea of using these to generate advertising revenue in the future.

The renting procedure for A3Charge is simple. One needs to download the A3Charge app, which is available on the Google Play store and Apple App store. The quick map tool on the app helps you locate the nearest A3Charge station and takes you there. You can choose from a number of subscription plans, pay a nominal refundable security deposit, scan the QR code and that’s it – the A3Charge power bank is yours to rent. Users can make a fixed number of swaps during the course of the subscription.

Sahil details their products by saying, “The power banks have three built-in cables including iOS, Android, and Type C to cater to different devices at once. They are compatible with a majority of devices including iPhones, Android Phones, iPads, AirPods, Tablets, headphones, earphones, and others. One can charge various devices at one go with A3Charge.”

Currently, there are three subscription plans to choose from - the monthly plan costs Rs 199 and comes with 30 swaps; the half-yearly plan is for Rs 699 and comes with 150 swaps; and the yearly plan is for Rs 999 and has 333 swaps. One has to a pay an additional refundable security deposit of Rs 499 with any of the plans. Once the number of swaps ends, the plan automatically ends and has to be renewed – no matter the time remaining on it.

An active social media presence and their on-ground marketing team helps spread awareness of the brand offerings. “We are present at key locations through our venue partners,” says Manu.

The popularity of their power bank rental service has coaxed the team to venture into other verticals of the rental economy to solve other consumer woes. They believe the advantages of rental services appeal to a large consumer base.

According to data published on the Allied Market Research platform, the global power bank market size was valued at $17.41 billion in 2019, and is projected to reach $22.34 billion by 2027, registering a CAGR of 3.4 percent. If people are willing to buy power banks, the chances of the popularity of A3Charge’s rental services are indeed high.

A3Charge, which competes with Spykke, GoCharge, and Plugo, is a bootstrapped startup, which began with an initial investment of around Rs 10 crore. The team is open to infusing more capital themselves and are hoping to raise funding from the market for their expansion plans.

Sameer outlines their growth so far, “One and a half years after launching, we have close to 20,000 active users across Delhi-NCR. The progress of A3Charge has been amazing. We started working on the product and the app – its integration, software, and hardware – in the latter half of 2019. Initially, we started A3Charge on an alpha testing basis - only a select few users had access to the application via APKs. Gradually, we moved to beta scale testing. From a few hundred people we grew to almost 5,000 subscribers by the end of February 2021. Towards the end of the second lockdown, we started picking up pace and had gathered around 15,000 active subscribers by the end of the year 2021.”

“We plan to cover more regions, territories, and countries as we move ahead in the business. Low battery problems are not just restricted to or associated with a single territory. It is a common problem across the globe. Our plan is to take the concept and idea of A3Charge to as many regions as possible, wherever users are willing to pay for it.”

The team has faced its fair share of challenges – as is the case with every technology-driven consumption-based startup. With several rounds of lockdown, it took a while for their business to pick up the pace. Though worried about their success rate initially, their sound business idea led to their growth with 2,500 new consumers every month since launch.

Highlighting their biggest rewards, the team exclaims, “Our customer feedback is most important to us. We have helped people charge their devices easily, and we have also helped our venue partners get additional footfall during Covid times. These are our biggest rewards and we look forward to helping consumers across several cities and territories.”

How to build self-discipline to exercise regularly

Ritesh Mallik: 'I regret spending six years studying what I did not want’