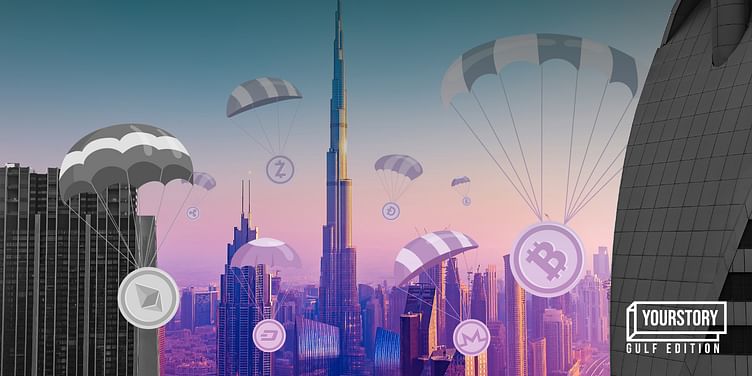 With its pro-crypto approach towards policy-making, Dubai has emerged as a hotspot for blockchain and Web3 founders from India and around the world.

Growing up in the era of economic liberalisation in India, Pratik Gauri was determined to build an Indian company for the country and the rest of the world.

As the founder and CEO of blockchain startup 5ire, Pratik is building a Web3 ecosystem designed with economic and environmental sustainability at its core.

However, like many other Indian Web3 founders, Pratik has opted for a decentralised structure for his project.

“As a Web3 firm, we chose a decentralised structure. We do not have any headquarters. We have offices and executives all around the world, including Dubai, London, the United States, Africa, and SE Asia, among others,” he says.

Dubai, in particular, has emerged as a hotspot for several Indian Web3 founders like Pratik. In the recent months, several unconfirmed reports claimed WazirX co-founders Nischal Shetty and Siddharth Menon have moved to Dubai.

And they are not alone. With its pro-crypto approach towards policy-making, Dubai has been attracting entrepreneurial talent not only from India, but from across the world.

Entrepreneurs see Dubai as a gateway to the Middle East and other regions of economic interest--especially emerging markets such as Africa, India, and SouthEast Asia that adopt crypto quicker than developed nations.

A research report by Crypto Oasis Ecosystem identified over 1,450 active Web3 organisations in the UAE. India, which features more startups than the UAE across sectors, had only around 450 Web3 firms till Q1 of 2022, as per a NASSCOM report.

The primary reason for this discrepancy is Dubai’s (and the UAE’s) fluid approach to policy-making.

As attempts for economic diversification gained a renewed sense of urgency in Middle Eastern regions, Dubai adopted a pro-crypto stance amidst the COVID-19 pandemic.

As it opened its arms to crypto firms from around the globe, the likes of Binance, Bybit, Crypto.com, and several other big names set up offices in Dubai and/or acquired licences to operate in the city.

Numerous startups are also cropping up in the region, attracting founder-level talent and investors alike.

Vineet Budki, who is deploying $100 million in seed funding in Middle East-based Web3 firms, finds Dubai a convenient location to stay in touch with the pulse of the blockchain segment.

The city features many Indian Web3 founders who find the Indian regulatory environment around crypto non-conducive to business.

Vineet says, “Dubai has become a singular place to get everything done. It has benefitted us because we can get access to good startups and have global visibility and good government support. The government is helping build the whole ecosystem, including events.”

He explains licenses can be issued across free zones in Dubai, and local policies include those related to NFT project formation, prop trading, developer licenses, and more.

“In Dubai, things are easier because there are two licenses which clearly specify if your firm is a prop trading entity or a crypto entity. It’s all about process simplification,” Vineet adds.

Earlier this year, Dubai also set up The Dubai Virtual Assets Regulatory Authority (VARA), a regulatory body to oversee the development of virtual and digital assets segment through regulation, licensing, and governance.

The city is also bullish on the metaverse movement. The Dubai government is working on a metaverse strategy with an aim to turn it into one of the world’s top 10 metaverse economies.

Further, the Dubai Chamber for Digital Economy is running a Metaverse academy and building training programmes for startups to build inside virtual platforms and virtual worlds.

From a business standpoint, it makes more sense for founders to operate in such a region with regulatory clarity on nascent technologies.

But building a startup comes with its own set of challenges. As many entrepreneurs have found out, working out of Dubai instead of India may be a case of trading one set of challenges for another.

As India-UAE bilateral relations improve, Dubai looks to continue attracting Indian Web3 founders in search for regulatory clarity on crypto businesses. This is something that is currently not a strong feature of India’s policies.

However, it isn’t always easy to operate in Dubai--especially for new Web3 startups.

The high cost of living makes it difficult for fresh projects to extend their runways. The overall lack of tech talent also makes it challenging for startups to build out of Dubai, according to Vineet.

“Further, opening accounts with local banks is also tough here. Fortunately, there are some global banks helping with setups for crypto startups,” he adds.

But these operational challenges are something entrepreneurs are used to dealing with, irrespective of the jurisdiction they operate in.

“Dealing with challenges is part of the entrepreneurial DNA,” Pratik says. “All of these challenges can be addressed with thoughtful application of technology,” he adds.

When asked if there are challenges in Dubai, he said, “Yes, every city has challenges. But are the challenges greater than the opportunities? No.”

Despite the recent fallout from the FTX bankruptcy, the global opportunity presented by blockchain tech continues to attract passionate Web3 entrepreneurs to regions that are pro-crypto.

Another Web3 founder who requested anonymity, says, “Web3 is very competitive, and countries that take early and positive steps towards adoption will try to be the new Silicon Valley of Web3.”

Dubai, which has clearly emerged as a front runner for blockchain and crypto firms, is set to benefit from the network effect created by startups and venture funds it has welcomed.

For instance, Cypher Capital is building a 10,000 sq. ft hub for crypto startups, which is set to open in Q4 2022 in Jumeirah Beach Residence, Dubai.

In fact, Dubai is advocating for policies that support the growth of digital companies--beyond just crypto--in the city.

In recent months, The Dubai Chamber of Digital Economy has been promoting the Emirate as a global capital for the next wave of internet innovations.

In a recent interview with YS Gulf, Khalid Al Jarwan Al Shamsi, Executive Director, Dubai Chamber of Digital Economy, said: “Dubai is driving the UAE’s digital economy forward as it embraces Web3 and the metaverse, fully integrates blockchain and AI technology across the public sector and invests in fintech and digital assets.”

Dubai is also being portrayed as a "natural springboard" for startups in the Middle East and African regions, according to Omar bin Sultan Al Olama, the Minister of State for Artificial Intelligence in the United Arab Emirates.

"We know that startups in Bengaluru look at the UAE as the natural hub for Africa, but startups in the UAE naturally look at India to expand and be more enabled," he said in another interview with YS Gulf.