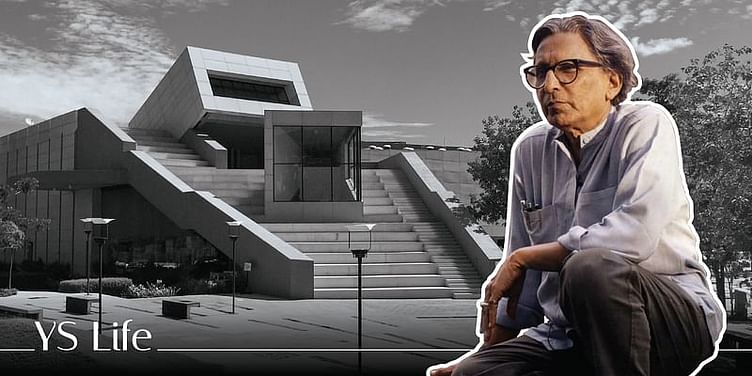 Some of the most prominent structures in India that boast a fine aesthetic – the IIMs in Bengaluru and Udaipur, the  National Institute of Fashion Technology in Delhi, or Ahmedabad’s Centre for Environment Planning and Technology – have a common thread. The brain behind these masterpieces was none other than veteran architect Dr Balkrishna Vithaldas Doshi, who passed away at his home in Ahmedabad on January 24, at the age of 95.

“We are deeply saddened to inform you about the passing away of Balkrishna Doshi (August 26, 1927-January 24, 2023), loving husband, father, grandfather and great-grandfather,” his family said in a statement.

They added that no one else ‘loved’ life more than Doshi, who would often utter the words ‘Anand Karo’ (this translates to enjoy what you do). Not only was he the darling of the architecture industry, but also of his family and friends.

Doshi’s demise has saddened people across the country, including the Indian Prime Minister Narendra Modi, who extended his condolences to his family. Modi tweeted, “Dr BV Doshi Ji was a brilliant architect and a remarkable institution builder. The coming generations will get glimpses of his greatness by admiring his rich work across India. His passing away is saddening. Condolences to his family and admirers. Om Shanti.”

A string of recognitions

Doshi’s work was the perfect blend of vernacular styles and modernist architecture, which made it stand out like no other. In 2018, he was conferred with the highest honour in architecture, the Pritzker Prize, making him the first Indian to win this award. He was also presented with RIBA’s Royal Gold Medal in 2021, the Padma Bhushan in 2020, and Padma Shri in 1976.

The visionary had earlier admitted to being heavily influenced by the nuanced styles of architectural stalwarts like Le Corbusier and Louis Kahn. In fact, he had worked with Le Corbusier in Paris for six years, in the 1950s.

“My works are an extension of my life, philosophy and dreams, trying to create a treasury of the architectural spirit,” said Doshi, shortly after receiving the Pritzker Prize.

A social advocate and more

While there’s no dearth of fine examples of architecture that Doshi helmed, one of his most noteworthy contributions to society remains the Aranya Low Cost Housing Project in Indore.

About 80,000 people inhabit the complex, which is believed to be “a system of houses, courtyards, and a labyrinth of internal pathways”, as per a statement released by the Hyatt Foundation in March 2018.

He also won the Aga Khan Award for Architecture for this project.

Sangath, his design studio in Ahmedabad, combines all his architectural themes, featuring a series of sunken vaults sheathed in china mosaic, a grassy terraced amphitheatre, and flowing water details.

Doshi, who believed that there is no greater teacher than intuition, will always be remembered for saying that he did not “want to make a building that looks like a building”.