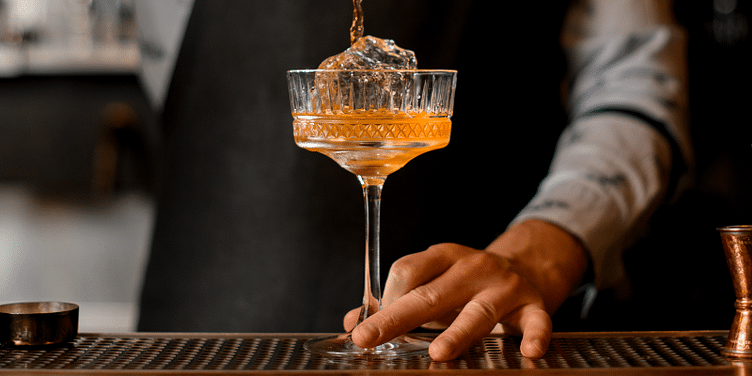 India’s gin market is bubbling with activity and its nerve centre lies in Goa. Led by Greater Than, the country has more than 10 homegrown gin brands today. However, this is just the beginning.

In the last couple of years, the beach paradise has also evolved into a hub for alco-bev experiments. Nao Spirits, the brand that got the ball rolling, is calling it the Gin-aissance. In September 2017, the company launched gin brand Greater Than, paving the way for other new-age homegrown gin brands.

Since then, several more have cropped up—Stranger & Sons, Hapusa, Samsara, Pumori, Tamras, Amrut Nilgiris, Terai, Jaisalmer, GinGin, and Great Indian Gin. While cult favourites like Bombay Sapphire, Hendrick’s Gin, and Tanqueray continue to be in demand for traditional lovers of the spirit, younger Indians are not shying away from experimenting with homegrown gin.

For 27-year-old Nisha Singh, Edinburgh Gin hits the right notes. But priced at ~Rs 7,000 for a 750 ml bottle, the brand isn’t quite affordable for the Bangalore-based professional.

She is instead experimenting with easily accessible and more affordable (between Rs 850 and Rs 3,000 in Goa) Indian-flavoured gins. The fact that these are locally sourced and distilled is an added bonus.

For the longest time, gin was considered an old person’s or a woman’s drink. In the first half of the 18th century, European countries saw a rapid growth in the consumption of gin and experienced the ‘Gin Craze’.

Since then, the UK gin market has grown manifold and according to data from the Wine and Spirit Trade Association, it recorded sales worth $1.58 billion in 2021.

In the 2010s, Anand Virmani, Co-founder of Nao Spirits, was working on the whiskey portfolio (Glenfiddich and Balvenie) at William Grant & Sons in Delhi, the company that launched Hendrick’s gin. “There were not many gin-takers in the country. People would come to a gin event and ask for a glass of wine or whiskey,” he tells YS Life.

Fast-forward to 2015, when Anand’s colleague started a wine and cocktail bar in Delhi and people started coming in for gin cocktails. “When more Indians started travelling to the UK and Spain, they became more open to the idea of gin. Plus, access to global trends through social media platforms and Instagram, accelerated the acceptability of gin,” he adds.

At the time, Indian bars only offered Beefeater, Bombay Sapphire, and Gordon’s—premium options for a fairly generic gin—or mass-produced Indian gin like Blue Riband and Blue Moon. There were no homegrown mass-premium gin brands available in the market, and neither was there any attempt to create one.

“Gin was already around during the golden era of cocktails and the Prohibition [when American bartending got inventive and theatrical], and it was ready to make a comeback once people were done with all the fast and colourful drinks of the 80s and early 90s,” Anand says.

In 2017, Nao Spirits stepped in to bridge the market gap and make a ‘cool’ homegrown gin brand, which would tick all the right boxes—local produce and botanicals, made in India, and with experimental flavour profiles.

Thus came Greater Than, a classic London dry spirit for regular G&Ts, and Hapusa, a contemporary gin with indigenous flavours and spices.

The following year, Third Eye Distillery launched Stranger & Sons. It is led by former London-based business development manager Vidur Gupta, who was surprised by India’s drinking habits when he returned to the country. “It was bizarre that Indians were drinking whiskey in the summer afternoons,” he says. “A lot of botanicals and concepts of the European gins were coming from India but the gin market was highly underexplored here.”

Goa-based Third Eye Distillery gave a new twist to India’s gin story. Not only does Stranger & Sons have nine herbs and spices and three different citrus peels, but it has also incorporated an element of storytelling in its bottles. The company also designed its bottles to cater to both day and night drinks—the Sun represents gimlets, a fresh and light cocktail for daytime consumption, while The Moon represents Gibsons, an aromatic and savoury cocktail for post-sunset consumption.

Then came Aditya Agarwal’s Spaceman Spirits Lab, which launched Samsara in October 2020—in the midst of a pandemic—and soon became a market leader in Delhi’s gin segment with a 22% share. Having worked in the creative division of Warner Bros and Sony Motion Pictures, he wanted to use his gin as a storytelling engine as well. “Indians now want more versatile drinks…they want intoxication but in a very sophisticated manner,” the Founder tells YS Life.

Aditya believes that wine and whiskey are too “snobby” while beer and whiskey “have a negative connotation” to them. “But a glass of gin decked up with flowers and garnishes looks like something your mother will not frown upon," he jokes.

That, along with the premiumisation of gin, the versatility of the spirit, and homegrown brands introducing products in the mass-premium segment has helped shape a bustling gin culture in India.

Gurpreet Singh, Co-founder of consumer-tech startup World of Brands, adds, “The problem with imported gin brands is that they are not always available—stock shortages and supply issues hinder its growth—and they do not even cater to the existing five percent demand.”

Interestingly, most gin brands are finding their roots in India’s party capital. While Goa’s favourable excise policies make it the ideal base for liquor companies, Anand disagrees.

He says Nao Spirits met several bottlers and distillers from across the country and Goa was never an option. It was a chance meeting with Mrinal Manu of Blue Ocean Beverages that led the team to set their roots in the state.

“Goa has a very shack-led F&B culture. When setting up the business, we were sure to not sell more than 25 cases of Greater Than a month” Anand reveals. Today, Goa is one of its biggest markets.

“We stumbled upon the strength of Goa from the consumer side. People from across the country are coming and trying out new products. Today, they don’t just return with a physical bottle but with the taste of gin with them,” he adds.

Aditya adds it is Goa’s position as a cultural hub that makes it a favourable base for these brands.

“It is pretty much like the ‘Silicon Valley effect’. Initially, alco-bev companies came to Goa for the excise policies. Now that there are already a couple of craft brands here, new players are taking advantage of the know-how, geography, taxation structure, and the kind of talent the hub is attracting,” he says.

“Goa being the melting pot of culture from all parts of the country and the globe makes it a perfect place for progressive entrepreneurs to come and get into the craft beverage space,” the Samsara founder says.

Headquartered in Delhi, Samsara has its distillery in Goa. Besides, Jin Jiji, Matinee Gin, Pumori, Tickle, and GinGin have also found their roots in Goa.

Anand says he is aware of seven new homegrown gin brands that are gearing up for their launch soon. With the number of gin players doubling, one might just believe that the market will soon reach its saturation point. But the alco-bev entrepreneur believes that there is plenty of space left for brands to enter and experiment.

The UK craft gin space kicked off in 2008 and by 2014, people started believing that the market was saturated with more than 100 brands with a cumulative valuation of over £750 million.

“People thought it was downhill from there…But in 2018, the UK had around 750 gin brands, valued at £3 billion and the market is still growing. Existing Indian brands, including us, have not been able to reach all their potential markets yet. We are surprised by the kind of response we got from Kolkata, Hyderabad, and Guwahati,” Anand says.

While the spirits are already quite popular in Tier I cities, Samsara’s Aditya says it will take time for the trend to trickle down to the Tier II and III areas, allowing time and space for more brands to find their niche.

“With the cocktail culture growing in India, people are not sticking to one alcohol anymore. They want variety. Moreover, gin is yet to become a staple or transcend the mainstream in India. People are latching on to it but it is nowhere close to beating a whiskey,” says Vidur of Stranger & Sons.

His company acquired Countertop India— a consultancy focused on developing the food and beverage industry— to bolster the cocktail conversation in the country. The company, along with Pankaj Balachandran, a renowned mixologist and Partner at Countertop India, has recently launched Short Story, a pot-distilled London Dry gin.

This year, the Indian gin market recorded a revenue of $1,670 million whereas the UK stands at $3,474 million. The Indian market is expected to grow at a CAGR of 7.3% between now and 2025, promising more scope for experimentation for homegrown brands.

Rincy Varghese of Blue Ocean Beverages and also the Co-founder of recently launched cocktail-in-a-bottle Mr Jerry’s believes that homegrown gin brands are not just putting India on the global alco-bev map but are also attracting international brands to invest in the country. Jerry’s offers six different cocktails and says its gin cocktail is one of its highest-selling products.

“Greater Than had the first mover advantage and with its marketing strategies and events, it carved the way for more brands. Stranger & Sons, on the other hand, with its bar takeovers and association with international mixologists are promoting more experimentation in the Indian gin space,” says Anjali Shahi, Co-founder of Goa-based Matinee Gin.

She adds that until gin acquires 20% of the total alco-bev market share, there will be scope for newer brands to enter and flourish.

“It is only the beginning. We are at an adolescent stage and we have a long way to go,” signs off Anand.

Hustle is overrated: Fostering work-life balance in tech at PhonePe