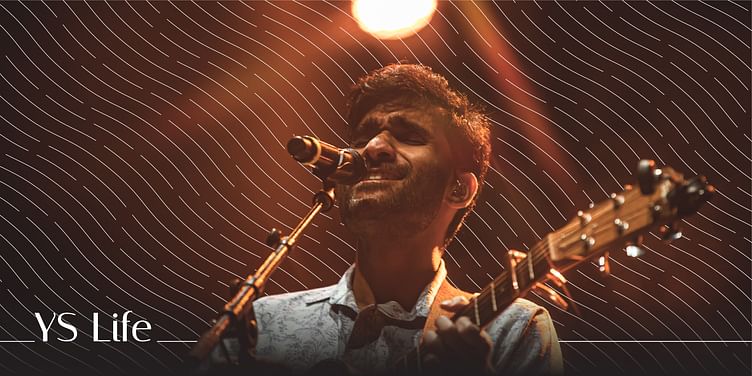 In a candid conversation with YS Life, singer-songwriter Prateek Kuhad takes us behind the scenes of his music composition process and his iconic music video ‘cold/mess’.

Four years ago, I received this text from my now ex-boyfriend on a chilly evening on December 5. As I tried gathering my thoughts to accept the reality of yet another failed relationship, a friend texted me: “Have you watched the cold/mess video yet?!”

Instinctively, I opened YouTube to watch the music video launched by singer-songwriter Prateek Kuhad, depicting the complexities of modern love. As if a heartbreak and Bengaluru’s damp weather were not cold, messy and depressing enough!

That day, actors Zoya Hussain and Jim Sarbh’s emotional vulnerability on screen, the tender scene in which they share a lemon tart, Prateek’s soulful voice, and heart-wrenching lyrics teamed up to make me cry my ugliest tears.

So, when I got a chance to interview this indie music genius from Jaipur, for YS Life, I just had to ask him—Why?

And I am not surprised by his answer that the song and the music video are loosely based on one of his own relationships.

“The underwater sequence was based on an imagery I had–to express this feeling of being trapped and suffocated. But, at the same time, it was so beautiful! I wanted to portray the dichotomy of a relationship with lots of ups and downs,” Prateek opens up.

Eager to take a sneak peek into the mind of Prateek Kuhad, who made it to the former US President Barack Obama’s line-up of favourite music of 2019, I ask him, “Who is Prateek Kuhad?”

Who is Prateek Kuhad?

“I am just a musician, writing songs,” laughs Prateek. As I prod him further to let me inside his mind, the 32-year-old says, “A lot of people think that I am an introvert but I really enjoy meeting people.”

Prateek has been strumming the guitar since he was 16 years old, but he never realised the importance of music for a really long time.

Growing up in an ordinary Indian family, making a career out of arts was never an option for him. At least not until he landed in New York.

After finishing high school in Jaipur, he had entered a country which has, in his own words, “an open and individualistic environment where people just let you be.” Prateek had joined New York University to study maths and economics, but he ended up spending the next four years discovering himself and acting on the instinct of giving music due importance. And the rest, as we all say, is history.

“I am really picky about my time alone. I need it to be creative, to write (songs) and figure myself out… Understanding myself is a constant process in my life. I need that time to figure out what I want to do and how I want to go on about it,” he says.

Like most artists, Prateek has had, and continues to have, existential crises. “For the last couple of months, I have been in a good phase but a moment of low or one show goes wrong and I will be questioning myself on what the heck am I doing here,” he confesses.

In today’s age, singers and songwriters usually create the melody first and then put the words into it. But, till about a couple of years ago, Prateek was taking the path less traversed.

“I did not think much about the melody… I just focussed on the words. Even today, the melody changes from when I first write a song till I take it to the studio,” he reveals.

It is only recently that Prateek started putting a bit of thought into the melody as well. The singer sits with his guitar or piano, sings out the words, and the melody automatically flows.

However, the final version involves a lot of finetuning—as he goes back and forth between the two instruments and does multiple voice recordings of different versions of the same song.

“There were 10 different versions of cold/mess, I picked the best one,” he says.

For cold/mess, the musician tried the first version on an acoustic guitar. It was only when he tried playing the song with his band that the drums and the electric guitar came into the picture. Today, the beats of the drum and the strums of the electric guitar are the defining characteristics of the song.

Prateek is one of those rare Indian-origin musicians who dabbles in bilingual music. How does he decide whether a song has to be in Hindi or English? He says, “I don’t. It is very instinctive and when I sit to write, I follow my gut.”

Having said that, there have been instances when Prateek had deliberately written a song in Hindi after having written too many in English.

Being involved in the process

Prateek says he’s very particular about the creative language of any music release or tour. Right from the music, the video, and the photos to the album cover art, the marketing strategy, and how the show is created, the artist likes being involved in the whole process.

When it comes to the concept of music videos, he sometimes comes up with ideas and at times leaves it to the director. Prateek usually sits on the sets of all his music videos.

Prateek shared the concept for the cold/mess music video and Ukrainian director Dar Gai fleshed out the script to make it into what it is today.

On the other hand, Prateek wasn’t sure about what to do with the Tum Jab Paas video and let director Reema Sengupta take control of the wheels and build the narrative.

However, “I have the most say in the music videos. If I do not like it, it will not happen,” he says.

While cold/mess is inspired from his own life, the songs he’s written for movies are guided by the movie’s script.

For instance, the lyrics for the songs in Kho Gaye Hum Kahan, Saansein and Kadam are based on the movie’s script. “I try getting into the character’s head. But most of the songs where I am given the control, I cannot help but let some of my personal life creep in,” he admits.

Prateek Kuhad is currently on ‘The Way That Lovers Do’ tour across 15 cities in India, spread over two months. Tickets to the show are available on BookMyShow.