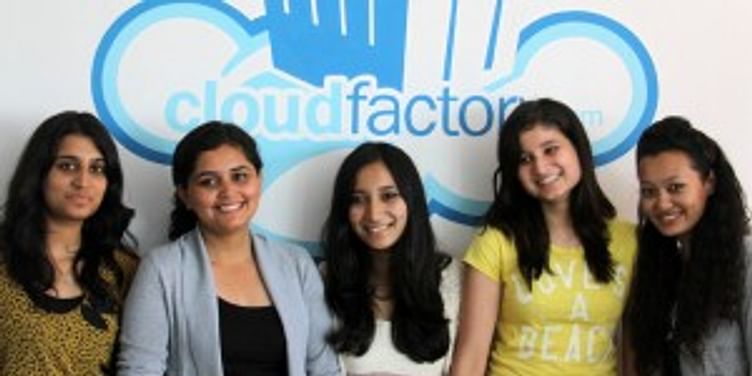 The story of Muhammad Yunus’s Grameen Bank and the microfinance boom that it sparked taught us a lot about the power of peer pressure in keeping people motivated. By using what is referred to as “social collateral” to secure repayment of loans to people with no other forms of collateral, Grameen Bank saw impressive repayment rates from individuals previously considered unlendable. Recognizing the value of social collateral, the team at CloudFactory extended this model to its own business, outsourcing, in a new and innovative way.

Based out of Nepal, CloudFactory is an outsourcing company that performs all those tedious computer tasks like dataentry, processing, collection, and categorization. It was started by a group of self-proclaimed geeks who moved to Nepal and recognized the vastly underutilized human capital potential in the developing world. They introduced CloudFactory as a way to train workers in basic computer skills, employ them with fair wages and give them room for career growth.CloudFactory functions as a fusion of efficacious business models designed to reduce cost, improve efficiency, and increase social impact. Their outsourcing operates on the cloud, so there is no burden of shipping costs or time lags. Adopting the assembly line typically used for manufacturing, CloudFactory breaks jobs into multiple simple computer tasks that can be easily taught to workers, dramatically improving efficiency as well as data security.

CloudFactory also uses the idea of social collateral to group employees based on locality and bring them together each week to hold performance reviews. Employees are rated both individually and as a group; if one individual’s performance is lacking, he brings down the group as a whole, and affects not just himself but members of his community, too. This social motivation has proven to elicit impressive productivity results.

“There starts to be this real accountability,” Tom Puskarich, VP Sales and Marketing, told us, “It’s not just ‘Hey, I’m doing a good job to try to build up this number that appears on the screen of some cloud platform in another country, but it’s the people that live in my community and I’m directly affecting them as well.’”

On top of the competency ratings in these group performance reviews, CloudFactory introduced character ratings. These character ratings are based on goals that group members set for themselves, geared toward ways to serve their communities and develop leadership traits. “The vision of the company is to use this job creation to build up leaders in developing nations to address poverty in their own communities,” Tom explained.

CloudFactory has recently received some early stage funding and is growing rapidly. According to Tom, these investors were equally as impressed by the social aspect of their company as the profitability side. “That was our goal, to do a seed round of funding that doesn’t make us fall onto more this profit side and not have to leave this social side behind,” Tom explained. “And they said yes, this is a big bottom line for the investors we brought in as well.”

They now work with around 150 workers and, according to Tom, are basically operating at capacity. When we spoke with Tom a couple weeks ago, CloudFactory had just recorded their biggest week ever, completing 118,000 tasks in just seven days. “One of our competitors, MobileWorks, recently announced they have done a million since their inception,” Tom told us. “But now were on the scale of doing a tenth of that per week.”

Tom emphasizes that it is CloudFactory’s for-profit model that allows them to have such a pervasive impact. Profit demands sustainability, and sustainability allows them to produce lasting effects. The ultimate goal of the company, however, seems to be not so much earning profit, but instead cultivating leaders and professionals in areas where skill and talent might be left to waste due to economic forces.

“A lot of these cloud workers aren’t going to be cloud workers for their whole lives, they’re going to go on to be journalists, and engineers, and political figures, and whoever,” Tom explained. “But building it from an early stage, its not just about learning how to do work better, but how to be a leader.”

Think CloudFactory can help your business?