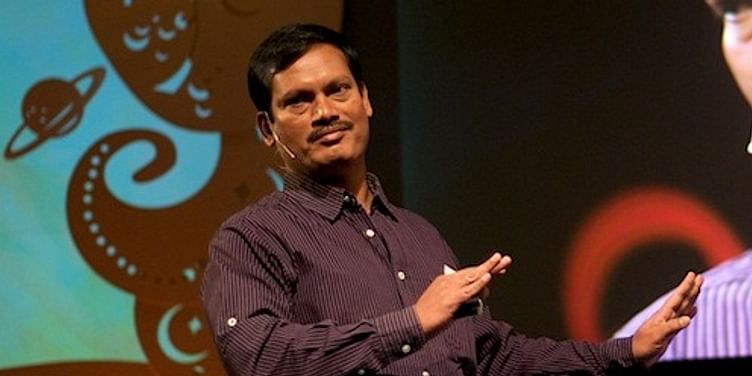 If you don’t know Arunachalam Muruganantham, watch this first

The story of Arunachalam Muruganantham has been told many times. Initiatives from TED and Inc and his countless guest lectures at forums, colleges and other organizations have given him the platform to disseminate the vision of his company, Jayashree Enterprises, to as many people as possible. But when asked more about his company, he says, “Please don’t call it a company. It is a movement.”

Of course, that is a great line for an entrepreneur to say. It is to make you believe that the entrepreneur is working for something beyond a profit. Enviable, but mistaken. Today, Arunchalam Muruganantham’s Jayashree Industries does close to a million dollars of business every year. He proudly says, “I now have a Bolero car and a house in Coimbatore. Many people are thinking that I will build Malls in this small town.” And in this “movement” Arunachalam sees a 5 Billion dollar opportunity, which he is sure he will capitalize on. He says, “When I do that, I will buy a private jet.”

Jayashree Industries, as a company has all the right makings of a great startup that will exit. A unique product, a great story to aid its marketing and rapid growth; it is used in 25 states and across thousands of villages in India. But Muruganantham has done this with no employees. Yes, he has no employees on the rolls of his business and yet, he has thousands of people working for him. He says, “You’ve spent about an hour speaking with me, you’re also in my team.”

You begin to buy his “movement” messaging, when you see what he has done. This zero employee company has generated employment by empowering its customers with entrepreneurship. Its customers are those who aren’t even privileged to have employment, let alone entrepreneurship. In its 9 years of existence, it not given jobs, it’s created jobs. It has shunned opportunities to sell out as it doesn’t mind growing slowly. If anyone can carry the tag of running a movement, Arunachalam Muruganantham can; perhaps one of the few today.

I’m not going to dwell on his story growing up and the journey that led him to starting up Jayashree Industries. He’s said it himself in way which I can’t hope to replicate it in. If you haven’t seen it, check this out –

Muruganantham shared that a Nielson report concluded that only 12% of Indian women use sanitary napkins. He says, “Because this Muruganantham was making such a huge hue and cry about this issue the government invited a foreign company to prove it. I don’t know what our obsession is with everything foreign. Anyway, they found out that only 12% of women use sanitary napkins. Even that I won’t agree with. The number will be much smaller if you remove the metros out of the equation.”

He believes that most sanitary napkin players are not tackling a few key problems. He says, “Sanitary napkins are cheap today. There are enough advertisements about them. All of them are marketing comfort. None of them talk about hygine, because it is too messy to speak about. But if you won’t talk about it, then how will you educate someone who’s never even heard of something like this?”

Muruganantham shared that villages where his machine is used have figured out very innovative ways of selling their sanitary napkins. He says, “I know villages where these sanitary napkins are sold in return for tomatoes and onions. Some villages sell them in instalments. I would love to see how those MNCs can do this.”

Over the hour long conversation that I had with Muruganantham, a group of us at YourStory.in were huddled around the phone, listening to one of the most inspirational men our country has seen in a while; a rolemodel for many generations to come. However, when we asked him about his rolemodels, he says, “I don’t have any rolemodels. And neither should you. Tell me, whom else do you know who’s exactly like you? No one. You were created to be different from 7 billion other people in this world. Why are you looking up to anyone?”

I was surprised to find out that Muruganantham was an engineer at a welding shop. After his father passed away at a very young age, he learnt the art of welding at a shop in his village. He says, “The owner of that shop was a drunkard and as a 10 year old, it is a terrible thing to be lifting a grown man from the gutters every morning. I vowed to never be like him.” Muruganantham went on to buy that shop from his owner at a grand sum of 50,000 Rs from when he was 17 – “It was my first acquisition,” he proudly says. These skills would later be instrumental in building the machine that today provides so many rural women with employment.

It is this engineer that keeps him going. He shared that he’s working on a new product which he will launch in a few months. He says, “This business will run on its own. My job is to build things. Once something is set, I move on to the next thing. That’s what I do, I’m an engineer.”