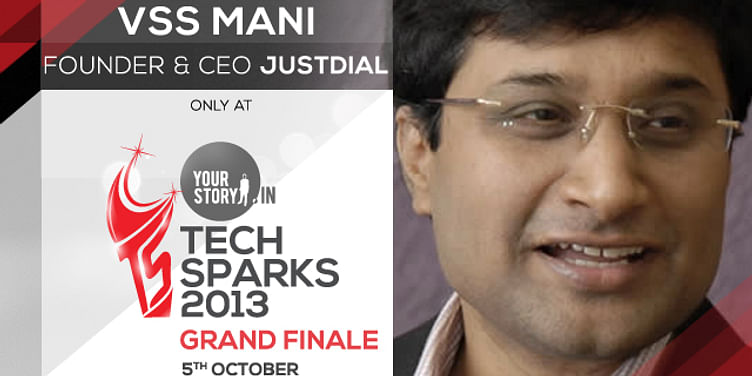 You may love the clichés or hate them, but there is some indisputable basis on which they flourish. They have been proven time and over again. We, at YourStory, are in the business of stories which revolve around ideas. We come across a multitude of ideas day in and day out. We have witnessed the bloom and blossom, the taking off and crashing down, the struggle and success - of ideas and the people behind them. The (clichéd) saying, that ideas have the power to change the world, is the one we adore.

One such idea that intrigued many, tickled a few, but inspired all, is the brainchild of VSS Mani – the idea behind Justdial. The idea was simple – to provide fast and free information to people about any service they need around a location, the bigger vision being to connect the buyers and sellers easily, just a call away. The information was present in yellow pages, in big fat directories but finding it when it was most needed was a challenge and Mani wanted to make it easy for everyone but doing it was not a cakewalk for him.

The idea that crashed while taking its first flight in the form of Ask Me Services in 1989 due to hostile environment – lack of market, ecosystem and capital – was rebuilt to fly again, and fly high this time, by Mani. Even after shutting down Ask Me Services after two-and-a-half years, the idea still throbbed in his heart and the dream to revolutionize the local information search service was growing by the day.

When Mani decided to start it again in 1996, he had the learnings and experiences from his past but he still struggled with the capital. The man who struggled to start his company, because he could not afford a telephone connection at that time, has revolutionized the way we receive local services’ information over phones today. We can just dial a number of 8’s to get any information we want!

Mani started Justdial with 6 employees and an initial investment of INR 50,000. It started with some rented computers, borrowed furniture and by hiring a few college students in the beginning, to collect data by literally knocking every door in Mumbai. After 17 years, Justdial has more than 7,400 employees, a presence pan-India, and even in the US, and a database of approximately 9.1 million listings. Mani has worked relentlessly, standing tall through thick and thin, building Justdial from scratch to a multi-million dollar company and taking it to IPO in March this year.

Justdial has written a spectacular story on the pages of Indian startup landscape which will be reread for years to come. Mani is a figure of aspiration and inspiration. His journey of 17 years cannot be bound in the limits of words. If there is anyone who can do justice to sharing Mani’s story with the world, it is the man himself.

We take immense pleasure and a little pride in bringing the Indian entrepreneur hero, VSS Mani, to share the glorious story of Justdial and the journey of his life with all of you at TechSparks Grand Finale on 5th October. We are thrilled to host Mani and invite you all to the country’s largest startup event – TechSparks Grand Finale in Bangalore.

This is just the beginning, we have a stellar lineup of speakers like never before. Keep reading to be more surprised and block your calendars for 5th October today!

Book your tickets now. We know you don’t want to miss this chance!