4th batch of Microsoft Ventures Accelerator has 6 ‘Accelerator plus’ companies 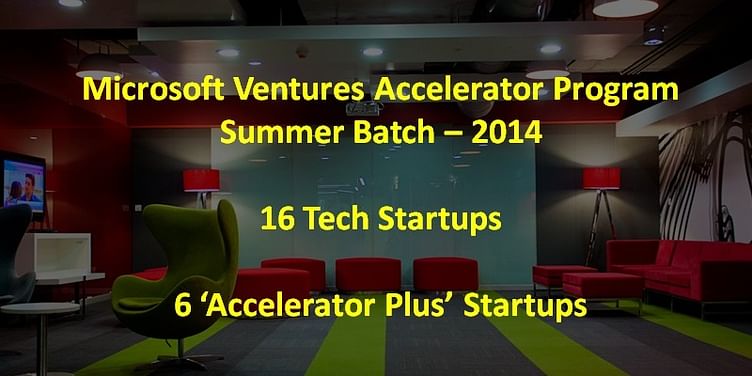 The six companies which are a part of the 'Accelerator Plus' program are MyBusTickets.in, Praxify, Thinxstream, Touchfone, ZingHR and Zoom.

So why does it make sense to have two groups of companies which are at different stages, in the same batch? Ravi Narayan, Director Microsoft Ventures, explained the rationale behind the 'Plus' program, “This program is for more mature companies which are closer to VC funding. Most of them have made significant progress, so much so that the startup ecosystem is taking their eyes off them. But we at Microsoft Ventures feel this is the time they need the most help, when from an investor standpoint they are getting ready to graduate into the mainstream. Microsoft Ventures is uniquely positioned with resources to help these companies to roll out products and raise serious capital to fund their growth.”

An accelerator makes sense for those companies which already have a certain amount of customer traction. Accelerators like the Microsoft Accelerator are well positioned, at that stage, to step in and help them move ahead faster than they would otherwise.

Microsoft Ventures in India partners with industry bodies to support the startup community and widen its reach. Four startups from the latest batch– Bookpad, Praxify, Imly and Boutline - were selected at events organized by one of their industry partners, NASSCOM.

The other applicants were put through an application process and a final pitch in front of a panel of judges, including industry veterans, and VCs.

Bharati Jacob, Founder-Partner at Seedfund, was on the judging panel. “It was a great mix of startups – some solving local problems which had global sized opportunities while others were global in nature. Most of the startups came up with original ideas, i.e. they weren’t “copy+paste” of an overseas idea. All teams came with tremendous energy and passion for their idea, which bodes well for the Indian ecosystem," Bharati said.

Microsoft Ventures in India has graduated 35 startups since August 2012. About 80 per cent of these are funded and two graduates, Adepto and Plustxt, have been acquired.

Does an 'Accelerator Plus' program make sense? What do you guys think? Let us know.