Two-Sided Markets and Platforms: the theory behind the new-age startups in India 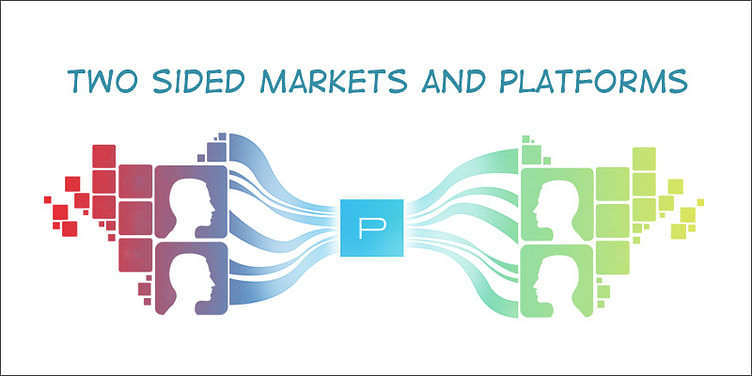 We are witnessing a revolution of a kind in India. The new-age entrepreneurs graduating from IITs and other premier institutions are leaving their lucrative corporate offerings and joining startups. Flipkart, Snapdeal, Zomato and Housing seem to be the favourites in campuses today. There are very successful exits such as RedBus and prominent IPOs such as Justdial.

What do these startups have in common? All of them, in some way or the other, use principles of Two-Sided Markets (2SM).

The theory of 2SM and associated platforms is not new. It has been in existence since the time Visa and Mastercard were discovered and even prior to that. In a typical 2SM, there are two sets of users who complement each others’ usage thereby increasing the network effect for enhanced value for both. The platform enables these two heterogeneous sets of users to come together to conduct commercial transactions. Success of the platform depends on the number of users on each side and the usage across them.

In a relatively unorganised market such as India, there are considerable challenges to interconnect the two sets of users and that is where the value of platforms such as the above emerges. However, due to relatively low entry barriers, it is easy to set up the platform business and hence the reason for many startups in this space. The caveat is that until the two sides scale up considerably the value of the platform remains minimal. Hence we see many dying and only some maturing.

Pricing is one of the important strategies in a 2SM. Typically, one set of users are subsidised while the other set pays premium depending on the price elasticity of the demand. Service seekers are subsidised by service providers; property sellers subsidise buyers; bus operators subsidise travelers. However, sometimes, both the sides may be subsidised in transacting over the platform, thanks to the third side and that is advertising firms. Google invented this model where the advertisers pay for click-through while both content providers and content seekers are subsidised.

Hence, it is important for analysts and players to keep in mind issues such as funding of these type of ventures, the nature of the two sides, the practicality of bringing them together, the possibility of scaling up and the pricing strategies. Both the founders and funders will be looking at the “critical mass” of users and transactions on the platform for possible exits.

Follow us on the analysis of some of the firms that operate in the 2SM space, in the future columns on YourStory.

Dr. T.K. Srikanth is on the faculty of the International Institute of Information Technology, Bangalore (IIIT-B), and a consultant to product companies on technology and product management. Earlier, he was a Vice President at Sasken Communication Technologies Ltd, where he handled business and technology roles, and lead many product and R&D initiatives, with a focus on wireless technologies and mobility.

Dr. V. Sridhar is a Research Fellow at Sasken Communication Technologies, Bangalore, India. He looks after idea incubation, knowledge management, and strategic initiatives. He is the author of the book, The Telecom Revolution in India: Technology, Regulation and Policy, and co-author of The Dynamics of Spectrum Management: Legacy, Technology, and Economics.