CommonFloor acquires Flat.to - YS in conversation with their in-sync founders 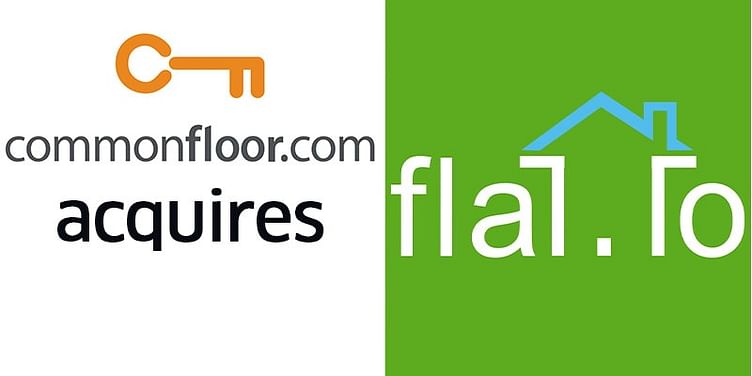 India's real estate giant CommonFloor.com has acquired Flat.to, the real estate portal helping students and bachelors find flats, paying guest accommodation and hostels across Mumbai, Pune, Bangalore, Kota, Jaipur and Delhi. Both the parties declined to share the financial details of the deal but confirmed that it involves both cash and stock.

Flat.to was founded by Gaurav Munjal and Aakrit Vaish in 2013; it recently shifted its office from Mumbai to Bangalore (read Flat.to story here). CommonFloor.com is all set to enter the student / bachelor accommodation space with this deal. CommonFloor had raised INR 64 crores in Series D funding from Tiger Global and Accel Partners earlier this year.

As a result of this deal, Flat.to might share the listings of CommonFloor where students are allowed in near future.

Sumit Jain, Co-founder and CEO of CommonFloor.com, said, “We will now be able to cater to the whole spectrum of users, from a bachelor who's straight out of college to someone who's looking to buy a property. This acquisition gives us a direct foothold in the market backed by a great team that has an experience of operating in this space. Flat.to has solved the problem of students and bachelors looking for accommodation in a faster and scalable way. ”

Gaurav Munjal, Co-founder and CEO of Flat.to, added, “In the last 10 months of operation, we have helped thousands of students across multiple cities in India find flats and flatmates. Our goal is to be present in every part of the country and this deal will help us get there. In our earlier engagements with CommonFloor, we realized that their team believed in our vision and shared our values. Our DNA will always be the same, jut that we'll be avoiding repeating some mistakes under the guidance of Sumit and his team."

Talking about CommonFloor’s strategy, Sumit said, "We realized that this one thing (bachelor's accommodation) was the missing link on our platform and we liked what Gaurav and his team had done in this space. We are not strategizing to acquire more companies as we have always focused to grow organically. Flat.to will continue to function independently under a bigger umbrella where they'll have access to a few already existing solutions.” He further added, "The problem lies around solving the property thesis. Whichever startup or venture solves the existing problems of property seekers (to rent and buy) will emerge as a winner in the longer run. With more players coming in, property buyers will probably have more of their problems addressed."

CommonFloor has recently announced its mobile application for Windows, Android and Apple mobile devices, and the e-model feature. The feature allows users to have a 360 degree virtual view of the interiors of an apartment. Currently, CommonFloor.com has over 2.5 lakh property listings and over one lakh projects from 120 cities.

Flat.to - a seamless integration and the future

Gaurav said, "I believe that both (CommonFloor & Flat.to) the founders share common values and vision. We have been focusing on fundamental things like week-on-week organic growth and growth hacking rather than creating a buzz or noise in the market."

Speaking about the future plans of the company, he said, "I would love to see that in six to eight months time when students start working and when they plan to buy a property, they should find it all under the same brand. In terms of impact, Flat.to plans to reach out to a million users by this year end and we'll use CommonFloor resources in cities where we're not present yet. We are completely mobile optimized now. Our main focus will stay on growing exponentially and add more services and to become the student brand for accommodation in India."

Aakrit Vaish, Co-founder, Chairman and Lead investor at Flat.to will exit the company with this acquisition. Aakrit said, “Flat.to was started with the very simple idea of simplifying student housing. I'm proud of what we have been able to achieve in less than a year of operation. I will always remain their biggest fan.”

Subrata Mitra, Partner at Accel Partners, said, “The acquisition is in line with CommonFloor.com’s strategy to own the largest share in the online real-estate space. CommonFloor.com is already the #1 player today and this move is aimed to take the lead in some of the adjacent segments.”

The market and the oportunity

The opportunity for online real estate players in bachelor / student accommodation category is huge. According to a January 2014 research paper, ‘Internal Migration for Education and Employment among Youth in India’, commissioned by UN-HABITAT's Global Urban Youth Research Network, in the last 10 years a total of 37 lakh students between the age of 15 and 32 migrated within India on account of education. Similarly, more than 1 crore moved in search of jobs.

What do you have to say about the deal or the market/opportunity!