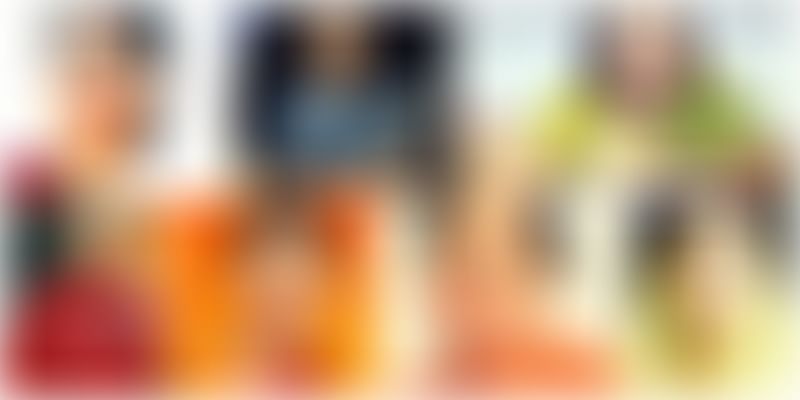 In 1930, when the Father of the Nation, Mahatma Gandhi, made this statement to the women of India, he was envisioning something similar to what happened yesterday at the swearing in ceremony of the Modi government.

It was a big day for the world’s largest democracy, not only because for the first time over 4,000 people attended the ceremony on the lawns of the Rashtrapati Bhavan in New Delhi, or for the fact that after 30 years a single majority government was being formed, but also because of the inclusion of seven women ministers, six of them with Cabinet rank— a first in any Indian government.

While there were veterans like Sushma Swaraj and Najma Heptulla on one side, there was an equally good show by relatively young ones like Smriti Irani and Harsimrat Kaur Badal in Indian general elections 2014. One thing was sure that these stalwarts of the BJP had left no stone unturned to reinforce their party’s victory.

While the enormity of success of these women leaders cannot be justified in few words, this is a humble attempt by HerStory to salute all these newly-appointed ministers who’re going to lead the country towards glory. Here’s everything you should know about each one of them:

The 62-year-old leader is best known for taking on Sonia Gandhi from Bellary in 1999 and being the first woman Chief Minister of Delhi in 1998.Sushma Swaraj was born in Ambala Cantt (Haryana) and her father was a prominent RSS member. She holds a B.A degree with majors in Sanskrit and Political Science and an LL.B. She was a practicing Supreme Court advocate from 1973.

In 1977, she became the youngest ever Cabinet minister in the country at 25, and after 2 years she was appointed as the State President of the Janata Party, Haryana state. Sushma Swaraj was the first female spokesperson of a national political party in India. She has many firsts to her credit as the BJP’s first female Chief Minister, Union Cabinet Minister, General Secretary, Spokesperson and Leader of Opposition. She has contested 10 direct elections from four states. She has been elected seven times as a Member of Parliament and three times as a Member of the Legislative Assembly.

In the 2014 general elections, she won from Vidisha Lok Sabha constituency with the highest ever margin of 4,00,000 votes.

At 38, Smriti Irani is the youngest among all the women ministers in the Modi government. But this model-turned-actor-turned-politician is no less than those with decades of experience.Smriti was born in Delhi in a Punjabi-Bengali family and was married to Zubin Irani, a Zoroastrian in 2001.

Before pursuing modeling, she was a waitress and cleaner at McDonald’s. She was a finalist in the beauty pageant Femina Miss India in 1998 and made her debut in acting in early 2000 with TV series Aatish and Hum Hain Kal Aaj Kal Aur Kal.

Smriti joined the Bharatiya Janata Party in 2003 and contested in the 14th Lok Sabha elections from the Chandni Chowk constituency in 2004. She lost against INC’s Kapil Sibal but was appointed the Vice-President of the Maharashtra Youth Wing. She has been nominated as executive member of the central committee for five times and was appointed as National Secretary of the party. She was appointed as All India President of the BJP’s women’s wing, BJP Mahila Morcha. She was sworn in as a Member of Parliament from Gujarat to the Rajya Sabha in 2011.

She had given a tough time to her opponent, INC Vice-President Rahul Gandhi in the 2014 general elections in Amethi and reduced the victory margin for him to a mere one lakh votes (one of the closest ever).

At 74, Najma Heptulla is the oldest minister and the only Muslim face in the Narendra Modi Cabinet. She has been five time member of Rajya Sabha, the Upper House, between 1986 and 2012, and is best known for her role as Deputy Chairperson, Rajya Sabha for 16 years.Dr Najma was born in Bhopal (Madhya Pradesh) and is highly educated holding both a Masters’ of Science Degree in Zoology, and a Ph.D. in Cardiac Anatomy from the University of Denver. Though she is a well recognised woman at the international level, her nomination by the United Nations Development Programme as its human development ambassador stands apart among the list of achievements. She also led a delegation to the UN Commission on Status of Women in 1997. Dr. Heptulla has authored book on AIDS titled ‘AIDS: Approaches to Prevention’. She has also written on human social security, sustainable development, environment, reforms for women and on ties between India and West Asia.

She started her political career by leading the All India Congress Committee and the NSUI and eventually climbed up the ladder at Indian National Congress. In 2004, she left the Indian National Congress party due to the problems with the party leadership (Sonia Gandhi) and joined Bharatiya Janata Party. In 2007, BJP-led NDA fielded her as a candidate in the elections for the Vice President of India, which was won by Hamid Ansari.

Dr. Najma Heptulla is a grand-niece of Maulana Abul Kalam Azad, a prominent Indian freedom fighter, a strong proponent of united India, and its first Minister of Education after Independence. She is also a second cousin to prominent Indian actor Aamir Khan.

She was nominated by the BJP for the upper house, Rajya Sabha in 2012 from Madhya Pradesh, and assumed her office on 24 April 2012.

Maneka Gandhi is an animal rights activist, environmentalist, former model and widow of the Indian politician, Sanjay Gandhi.She was born in Delhi in 1956 to a Sikh family and is a Lady Sriram College for Women and Jawaharlal Nehru University alumnus. She was married to Sanjay Gandhi, son of Indira Gandhi, at the age of 18 years only.

When Maneka was just 23 years and her son (Varun Gandhi), just 100 days old, Sanjay died in an air crash. Three years later, Maneka formed her own party Rashtriya Sanjay Manch focusing on youth empowerment and employment. The party won 4 of the 5 seats it contested in Andhra Pradesh state elections.

She contested the Lok Sabha elections in 1984 as an independent candidate from Amethi against Rajiv Gandhi. But riding the massive sympathy due to Indira Gandhi’s assassination, the latter won and eventually became the Prime Minister of India. In 1988, Maneka merged her party with Janata Dal and became its General Secretary. The party won the general elections and at 33, Maneka Gandhi became India’s youngest Minister (as Minister of Environment & Forests in two successive governments).

Contesting as an Independent candidate from Pilibhit, Maneka was re-elected in 1996 and again in 1998 with among the highest margins of victory in the country. In 1999, Maneka lent support to the BJP led by Atal Bihari Vajpayee and when the party was elected to power, Maneka became Minister for Social Justice and Empowerment. She joined the BJP in 2004, and again contested and won from Pilibhit.

As a six-term Member of Parliament (five times from Pilibhit and once from Aolna), Maneka Gandhi is among the most senior legislators of India. She is currently Chairperson of the Parliamentary Committee on Govt. Assurances.

Harsimrat may have entered active Indian politics in 2009 general elections, but her association with Indian politics dates back to 1991 when she was married to Sukhbir Singh Badal, son of Punjab’s Chief Minister Parkash Singh Badal.

Born in Delhi in the year 1966, Harsimrat is a matriculate and holds a diploma in textile design.

She has retained her Lok Sabha seat of Bathinda in the 2014 Indian general elections for her party Shiromani Akali Dal and emerged victorious by over 19,000 votes.

The six-time Member of Parliament and an ex-Chief Minister (Madhya Pradesh) is the controversial of the lot. She rose to national prominence when she became one of the major faces of the Ramjanmabhoomi movement alongside L. K. Advani and others.Uma Bharti was born in 1959 in Tikamgarh district of Madhya Pradesh and has studied till class sixth only. She began to give religious discourses while still a child, which brought her into contact with Rajmata Vijayaraje Scindia, who would later become her political mentor.

Uma Bharti contested her first election at the age of 25 years (in 1984) but lost it in the Congress wave that followed the assassination of Indira Gandhi. However, in 1989, she was elected for the first time as Member of Parliament of India from Khajuraho Lok Sabha seat and retained it for the next three elections. It was only in 1999 that she switched the seats and contested from Bhopal constituency. She was a part of Cabinet of the Vajpayee Administration, and held various state-level and Cabinet level portfolios of Human Resource Development, Tourism, Youth Affairs & Sports, and finally Coal & Mines.

In the 2003 Assembly polls, she led the BJP to a three-fourths majority in the Madhya Pradesh Assembly and was appointed as the Chief Minister of the state, only to resign in 2004. She left BJP and formed Bharatiya Janshakti Party on the ideology of the RSS. She was re-inducted in Bhartiya Janta Party in 2011 and subsequently appointed as party’s Vice-President.

She has won from Jhansi Lok Sabha seat in the 2014 general elections.

The 54-year-old BJP leader is an official spokesperson of the party since 2010 and well known for her soft and unruffled demeanour.

Nirmala Sitharaman was born in Tiruchirapalli (Tamil Nadu) and the only woman representative among the ministers from southern part of the country. She has completed her M. Phil in International Studies from Jawaharlal Nehru University and has earlier worked for Pricewaterhouse Coopers as a Senior Manager and for BBC World Service (London).

In 2003, she was nominated to the National Commission for Women in Delhi. When the BJP adopted a 33 percent reservation for women, Nirmala came in touch with Sushma Swaraj and decided to join the BJP despite her family’s links with the Congress.

Nirmala Sitharaman is married to Dr. Parakala Prabhakar, a political commentator and television anchor, who is also an alumnus of JNU.

Do you have something else to share about these inspiring women leaders? Comment below and let us know!