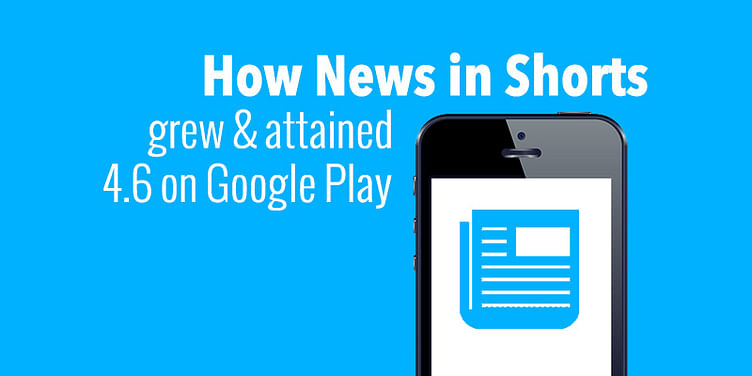 News in Shorts, a startup that summarises news in 60 words or less, recently attained a rating of 4.6 on the Google Play Store and is now one of the highest rated news apps on it.(Considering apps with > 100,000 downloads.)

Scaling up and finding the right product-market fit are among the biggest challenges entrepreneurs face. While things may be smooth sailing in the beginning, as a company grows challenges become bigger and harder to overcome.The News In Shorts team shared their growth story with YourStory.

News in Shorts was started by Azhar Iqubal, Anunay Arunav of IIT Delhi, and Deepit Purkayastha of IIT Kharagpur in 2013. Their view was that though the youth of the country were ready to spend hours on Facebook or Whatsapp, they were not even aware of the most important news topics of the day.

From their personal experience they knew that it was not easy for a youngster to keep up with the news because of the sheer volume and number of stories published every day. So they decided to start a service that provided summaries laden with only facts and figures, devoid of opinions to make it easier to consume for the youth and those who are short on time.

Related read: Coming in ‘shorts’ – News, from IIT students, for the mobile-first nation

Their app was well received with thousands of users downloading the mobile app. They then raised an undisclosed amount of seed funding from Times Internet, Flipkart Co-founders Sachin and Binny Bansal and entrepreneurs Gaurav Bhatnagar, Ankush Nijhawan and Manish Dhingra in 2014.

From a recent survey conducted by YourStory, News In Shorts was among the top five apps. Even though all the other news apps out there had downloads in millions, which shows its popularity among users.

Related read: Which are the most popular Indian apps? Here is what we found

Google Play ratings of the other news apps

They are also working on robust personalization engine that will understand the user’s interest based on their usage and recommend or push only the articles which he or she may be interested in. Keeping up with this, the team plans to publish 120 articles day, of which users will only see a percentage according to their usage patterns. The team is planning to roll out the first version of the personalization engine in March.

The team also insists that quality of the content is of utmost importance to them. Hence, all their articles are written and edited by their edit team and they have no plans to implement Natural Language Processing like Clipped , to automate the same.

The app is free to download and for all users. The team is currently focusing on the quality of their content and getting more users on their platform. They have so far not monetized with in-app advertisements or other means.

They have worked out a few methods to monetize the app, but it is not their key focus at the moment. They also confirmed that they are financially secure and may look to raise more funds in the future, if need be.

A stable version of their iOS app got approved on the App Store recently. Their future plans include working on their personalization engine, hitting a 4.7 rating on the Google Play Store and achieve a similar feat on iOS as well.