Gift A Pension: a unique initiative to add financial cushion to the lives of helpers around us 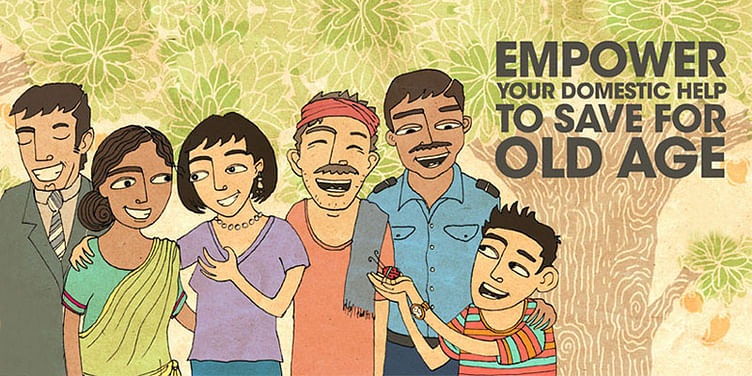 My driver Des Raj is more than 70 years of age. He joined me nearly two decades back and has continued to work for me ever since. His long stint with us and congeniality makes him a part of the family, not just an employee.

At an age when he should be sitting at home and enjoying the winter of his life after having worked hard all his life, he has to report to a job day after day. The word ‘retirement’ does not exist for him!

When I once mentioned the idea of retiring to him, he laughed it away.

“You must be kidding. I must continue to work till the day I die. How do you think I’m going to eat if I stop working?”

We are all hugely dependent upon people like Des Raj and others like him around us, so much so that life goes topsy-turvy if any of them does not turn up unexpectedly.

We do pay them for their services, of course. But are we doing enough?

Don’t they deserve a pension when they grow old for having made our lives so much more easy while in their prime?

Gift A Pension: a MPF project to help people with tiny or no savings at all

Old age financial insecurity is a challenging problem for India at large, and the concept of retirement and pension evades most of the working population, especially those in the low income workforce.

At present, 90% of India’s 487 million strong workforce is employed in the informal sector and has no social security. They are employed as domestic helps, nannies, gardeners, cooks, drivers, guards, etc. Add to it your raddi-wala, dabba-wala, dhobi, watchman, the doodh-wala and so many more. Sadly, almost none of them have any cushion for their old age.

The Micro Pension Foundation, which was set up to use technology to design innovative models to deliver a social security solution to this segment, found out that there are 40 million domestic workers in the country. Sensing that some of these people want to save but are limited by awareness and access, they came up with the unique Gift A Pension initiative.

Gift A Pension is a web-based platform that enables employers to enrol their domestic help for pension benefits. By enrolling their domestic workers under this plan, employers can assist their helpers draw a respectable pension by the time they decide to quit their job.

The enrolees under this plan will be supported by the government to the tune of Rs 1,000 every year for the first few years (under the Government of India National Pension Scheme), in addition to which they will get a Rs. 30,000 pure term life insurance cover from SBI Life, and a simple, secure and convenient payment solution with VISA. After their enrolment, the platform directly communicates with the domestic worker for regular savings and ongoing services.

“Gift a Pension brings together digital and financial inclusion in a unique way. Individual employers across the country can enroll their domestic help for the national pension product online, and the platform takes responsibility for ongoing servicing of these domestic workers. We can empower 1 million domestic workers in just one week using this platform,” explains Parul Khanna, Associate Director, Micro Pension Foundation.

Though the concept unveiled and launched by the parent company MPF in September 2014 is unique and laudable, it has not been as big a hit as it should have been. Inspite of drawing appreciation from all quarters for their path-breaking effort in trying to provide financial security for those not managing to save enough, the problem lies in getting the domestic workers to enroll!

Convincing them about the need for saving, and that their savings will be in safe hands has not been easy, as any of the 450 employers who have finally managed to enroll their helpers with GiftAPension will endorse.

Atul Vaidya, a banker from Bengaluru who wanted to reward his loyal maid of three years after learning about this plan, could not have agreed more on that! Keen to help the girl who had helped his working wife and him raise a kid while they would leave for their respective offices every day, he had to call the 20-year-old girl’s mom and dad to his place a couple of times to make them understand the need to save for a rainy day. Talking about a pension, he now recalls, came much later!

“Though they were thrilled with the idea of getting a regular stream of funds even after they cease to work, they were obviously not happy with the idea of not being able to use a small part of it every month for now,” says Atul.

Besides a wee bit of cajoling from Atul and his wife Aparna, the simpletons hailing from a remote village in Bihar had to be shown the interactive demos videos on the Gift A Pension site to assure them that the money would be accessible to them no matter where they went (even after they changed their employer or chose to go back to their village) and that they could choose to skip an installment in times of need.

“She now puts in Rs 300 from her side while Aparna and I are happy to co-contribute Rs 200 each month for this wonderful girl. At less than the price of a pizza, I can help her save for her old age. And, believe me, it’s a great feeling,” says a proud Atul.

The 20-year-old girl will be able to draw a pension of nearly Rs 7,600 every month if she continues to save at this rate. Fair enough for someone who earns Rs 6,000 a month now!

The role of the employer is limited to the process of enrolment for which they are also charged a onetime fee of Rs 300. The workers can then go on to save their micro savings from time to time using the Micro Pension prepaid card which they are given along with the welcome kit or using their bank account, if they do have one.

The card can then be recharged just like a prepaid mobile phone-online by any employer, and/ or they can load it themselves at multiple outlets located across the country.

“You can reward someone who has been good to you in four simple and very easy steps,” explains Parul.

“The initial enrolment is done online entirely. Within four days of enrolling, you get a courier delivered at your mentioned address. You then have to get the signatures of your helper. After that, the courier gets picked up again from your doorstep, to make it super convenient,” she adds.

Having succeeded in creating a buzz about their plan within six months of their launch, the Gift A Pension website now gets nearly 500 to 1,000 hits every day.

The conversion rate has not been very encouraging so far but 1,400 employers have registered already, and 450 enrolments have been completed.

“We are very excited about the uptake in Bangalore and Mumbai, but are also keen to get more traction in Delhi/ NCR, which is home to most of us,” mentions one of the team members.

Not a bad beginning for an organization which is trying to find takers for an idea which has been marred due to a lack of demand for it!

Out of the people who have come forward to enroll so far, 55% of the enrollees have been women. 63% of these enrolments were completed using an Aadhaar card while 11% of the employers have set up an auto debit instruction on their credit card.

“We are thrilled to be able to gift the promise of an independent old age to Nirmala (their full time help). It is also nice to see her develop a habit of saving, which is a real win for us,” says the retired Kasbekar couple from Mumbai, both of whose sons are settled in the US and for whom life without their daily helper, the ever smiling 26 year old, would be unimaginable.

The small Gift a Pension team, working from a tiny cell in Delhi, inspite of having made a humble beginning, is upbeat.

“Our first goal is to reach out to more individuals and enable more low income workers to save for a dignified old age using the platform. Using this platform, we can enable a million lives this week alone. Over time, we also plan to introduce other products, including health insurance,” they add when asked about their future plans.

Though the thought of not being able to help Des Raj with a pension is upsetting, everyone in the family is thrilled with the fact that his 20-year-old grandson Monu, who started working as a helper at a Xerox shop recently, will be enrolling this weekend.