‘You cannot lead unless you are future-oriented’ - 35 quotes from business guru C.K. Prahalad 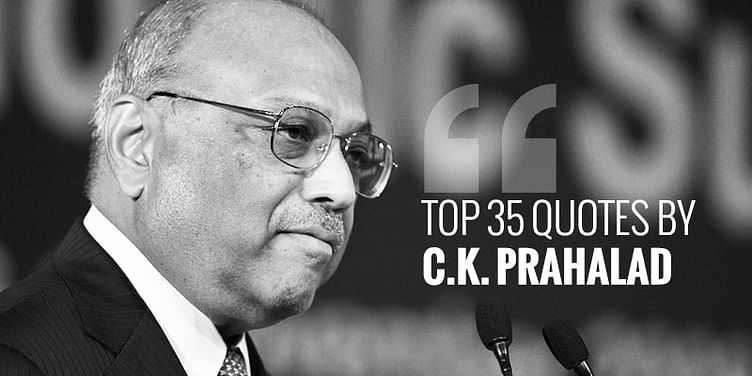 Coimbatore Krishnarao Prahalad (known as ‘CK’ among friends) was born in 1941 in Tamil Nadu, where he studied at a local Tamil-medium school. He graduated from Loyola College in Chennai, University of Madras, IIM Ahmedabad and Harvard Business School. His path-breaking books include ‘The New Age of Innovation,’ ‘The Future of Competition,’ ‘The Fortune at the Bottom of the Pyramid (BoP),’ and ‘Competing for the Future.’ He received the Distinguished University Professor award from the University of Michigan, Faculty Pioneer Lifetime Achievement Award from the Aspen Institute and the Lal Bahadur Shastri Award for Excellence in Management.

Prahalad successfully bridged the world of academia and business leadership, and served on several corporate boards, including NCR Corporation, Hindustan Unilever and TVS Capital. He consulted for a range of companies such as Oracle and AT&T, and played an important role in the revitalisation of companies like Philips.

A true patriot of India, he traveled across the country for decades, delivering inspirational talks to business leaders and college students alike. He mentored and consulted for many of India’s business leaders and helped set ambitious targets and visions for industry bodies like CII, AssoCham, FICCI, TiE and NASSCOM. His vision document for [email protected] (download PDF here) is a must-read for all those interested in the opportunities, challenges and roadmaps for India in year 2022.

Prahalad was a strong champion of entrepreneurial and inclusive approaches as a solution for economic and social problems in emerging economies like India, and his seminal work has been captured in the book ‘C.K. Prahalad: The Mind of the Futurist’ by Benedict Paramanand. I recall attending Prahalad’s mesmerising talks at TiE events in Bangalore and Delhi, and his workshop at IIIT-Bangalore on ‘India as a Source of Managerial Innovations: A Researcher’s Candy Store?’

We share here a sample of Prahalad’s 35 quotes, and celebrate his dedication to the spirit of creativity, innovation and entrepreneurship.

Customers are now active participants who actually co-create the value they receive.

Don’t expect respect from what’s been done by your ancestors.

Executives are constrained not by resources, but by their imagination.

Every time we have had clarity of thought, and true effort behind its execution, India showed it can deliver.

How we ask the question is extremely important to how we find the answer.

How you achieve results defines the kind of person you become.

Humility in success and courage in failure are hallmarks of a good leader.

Identify new opportunities by focusing on the weak signals.

I believe India is going to re-write the meaning of manufacturing quality with intelligent components.

If we stop thinking of the poor as victims or as a burden and start recognising them as resilient and creative entrepreneurs and value conscious consumers, a whole new world of opportunity will open up.

If you give 100 per cent to everything, probably you will enjoy 200 per cent of the benefits.

If your aspirations are not greater than your resources, you’re not an entrepreneur.

India is the laboratory to the world.

Invent a new game, and there will be a lot of room at the top of the field for you.

In 1817, India accounted for 30 per cent of global trade. We have been there before, and we just tend to forget that we did it before.

It is the customer who now decides what can be done and what cannot be done.

Poor people know more about life than you will ever know.

Social justice is not socialism.

The antidote to poverty is organising poor people.

The big challenge for humanity is to get everybody, not just the elite, to participate in globalisation and avail its benefits.

The crisis in India is a crisis of leadership.

The future lies with those companies who see the poor as their customers.

The problem of poverty must force us to innovate.

The world is your market, why limit your imagination only to India?

This is the first time that the human race has been connected together, thanks to the advance of new technologies.

Until you actually experience what someone goes through, you should not judge them.

When you start thinking about co-creation, you have infinite ways of differentiating experiences.

You can break rules but don’t break obligations.

You cannot lead unless you are future-oriented.

You have to forget before you learn something.

You have to go with your passion; if you don’t do it, you will look back 30 years from now and you will never forgive yourself.