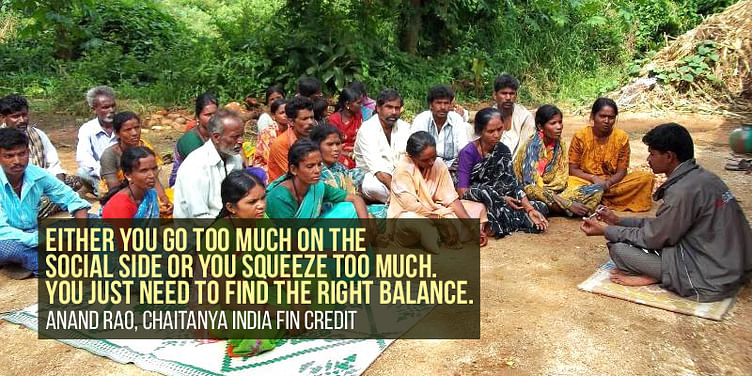 In 2004, Anand Rao completed his MA in International Relations from Syracuse University, USA. Immediately thereafter, he returned to India, and started working for the Small Scale Sustainable Infrastructure Development Trust. It required him to go out in the field and interact with rural Indians. After working for four years at the NGO, Anand decided to start Chaitanya India Fin Credit, a non-banking financial institution. “We started in 2008 – till about 2009 we were very small and we weren’t making any profit. Then we decided that it was better to go the corporate way and applied for a commercial licence,” says Anand.

The foundation was initially bootstrapped with Anand’s savings. During his tenure at the NGO, he had worked in a village called Nayakanahatti in the Chitradurga district of Karnataka. At Nayakanahatti, Anand partnered with a local teacher, and created an initial fund of Rs. 5 lakhs, which was all the money he had saved. Originally from Mangalore, in Karnataka, Anand says he wanted Chaitanya to be local, because ‘it’s important you find connection with your own community.’ Chaitanya works at the taluka or grama level, where importance is not on large commercial enterprises but on livestock, animal husbandry and agriculture.

“One of the things we do, which not many others do, is to give loans for the purchase of farm animals and livestock, but only to people who do not run a husbandry on commercial basis,” says Anand. Chaitanya encourages villagers to take out larger animal husbandry loans but along with insurance, so that they are protected from loss if anything was to happen to the animals, through no fault of their own.

The biggest loan that Chaitanya has extended till date is for an amount of Rs. 35,000. It may not sound like a large number, but it is the kind of loan that can spell good fortune for a smallholder who owns about two acres of cultivable land. Anand clarifies that a smallholder needs about Rs. 25,000 to plant groundnuts or sunflowers, both of which are rain-fed crops unlike a cash crop like sugarcane. Chaitanya has also provided micro-loans for floriculture – a produce which is perishable in nature, and therefore, time sensitive.

Anand says, “If it rains today, you need to plant the seeds in two-to-three days. If you are not ready with the seeds, it’s a big problem because the traders exact a larger pound of flesh when giving them the money to buy the seeds. They also “lock” the price of the produce so that the farmers cannot take advantage of the higher prices that prevail when the demand for a particular produce goes up.” On the contrary, by giving loans to the farmers, Chaitanya allows them the privilege and benefit of fixing their own prices.

For larger loans, Chaitanya lends in groups. For instance, small rural villages don’t normally have a market where farmers can buy animals. Either they need to travel to the bigger cities or journey into neighbouring states like Maharashtra. “In these cases we don’t give loans to individuals, but to groups. They groups can then organise transport and other logistics more efficiently. Besides, all members of a group need not be present during the time of purchase; they can spend their time more profitably by tending their fields.

However, Chaitanya doesn’t stop at lending alone; it also keeps track of the borrowers and gives them valuable advice. For example, if a borrower purchases an animal, Chaitanya provides him/her with valuable information on what business to take up, or where the produce can be sold (like milk from a cow).

Like with any Non-Banking Financial Institutional (NBFI) lending schemes, middlemen are a big issue. Anand says that it is very difficult to circumvent them, especially since they have been, historically, part of the system. Anand explains further, “What we’ve done so far is that we give money, along with insurance, and once the farmers harvest or collect their produce, they can go directly to buyers and sell it – as opposed to middlemen, who did not lend them the money in the first place.” However, things are complicated in these areas and eliminating the middlemen is not easy. They know the business, are powerful and well connected, and have access to buyers and other sellers. All we can do is get to the grass-root level and try our best to give the smallholders more bargaining power. It is a matter of taking small steps to make a bigger impact.” The good news is that many other NBFIs are venturing into these uncharted waters and challenging the clout of these middlemen. And even though, Anand continues to reiterate the difficulties of overthrowing these middlemen, Chaitanya, for the most part, has proved to be successful with its network of 15,000 groundnut farmers.

Thankfully, Chaitanya is not limited to microfinance, either. The next big thing on its agenda is to foster entrepreneurship amongst the smallholders. This will improve their economic situation and help them diversify their means of income generation.

Anand explains why and how the loans are working, “There are farmers who borrow money to purchase a cow, and when they see that it has made a difference to their economic condition, they gradually increase the quantum of their loan, the next time around. Other farmers, who are sceptical, don’t initially accept such loans, but when they see the improvement in the lives of others, become more amenable to the idea. In rural India, there is another significant problem – unless you are able to tie the smallholders with a broader commercial network or stable market, you merely get them into a loop. This is because most of them do agriculture –and that is heavily dependent on the rains. Instead we extend a lot more loans for livestock to help diversify the economy, for e.g. with milk, they don’t have to rely on agriculture.”

Another characteristic problem is that entrepreneurs who work in low-resource settings have to keep building within that ecosystem. However, there is a silver lining to this because of the amount of knowledge and expertise that one gets to develop. Once an entrepreneur hits the point of saturation, they have to partner with someone else or find an investor to go to the next level. Anand feels, “This expertise is what works in the milk business. We just need to scale in a way that is good for the business and for the stakeholders.”

Chaitanya’s revenue stream comes from the interest margins on its loans. “We’ve got equity and debt funding, too. Chaitanya has been profitable since the seventh month – because we’ve done a lot of bootstrapping and I’m being very conservative. Additionally, we get our customers integrated with the mainstream financial system, which is, incidentally, also on the agenda of the government. We’re riding on the Jan Dhan Yojana. All our customers have bank accounts, and we mostly give loans to women,” says Anand. The preference for giving loans to women comes from experience – women, he feels are more reliable with money, and work hard, even if most of the money at home is controlled by the husband.

Doing the balancing act between a business model and its social impact has been the most challenging aspect of Anand’s job, especially, when it comes to finding investors who are not dissuaded by the low returns. In conclusion, Anand states, “Either you go too much on the social side or you squeeze too much. You just need to find the right balance.”