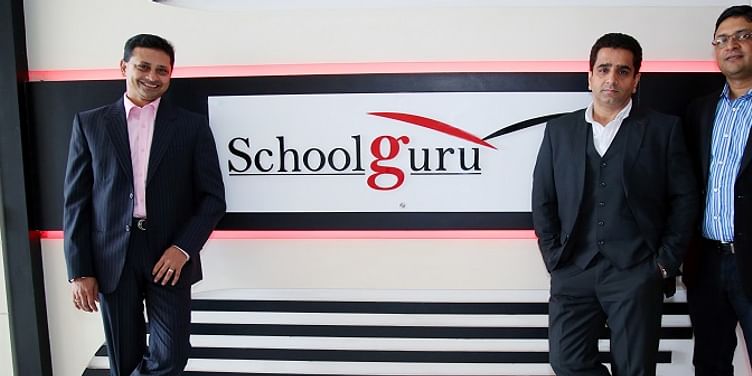 According to a report by Docebo, the inflow of venture capital in the e-learning space over the past five years is an estimated USD six billion globally. For India, TechNavio's report forecasts the Compound Annual Growth Rate of the Indian online education market is set to grow at a rate of 17.50 per cent from 2014-19 (which may be the highest in the world).

Today, higher education amounts to almost 50 per cent of the Indian education market. This was something co-founders of Schoolguru foresaw while starting out in 2012. With the government putting impetus on school education, they knew that the physical infrastructure (for higher education) cannot be scaled at the same rate as the demand.

However, this wasn’t a new space for Co-founder Shantanu Rooj. Being an entrepreneur for the last 18 years, Shantanu started his entrepreneurial journey with Paradyne, followed by Broadlyne, which provided Enterprise Resource Planning (ERP) solutions to various colleges and educational institutions.

Shantanu sold both his ventures to Glodyne Technoserve, where he met Co-founder Ravi Rangan, an entrepreneur for 20 years who also sold his company, Comat Technologies, to Glodyne.

With a strong background in education technology, backed with entrepreneurial experience, Schoolguru came together with little fuss. Soon Anil Bhat, a close associate of Shantanu’s, and a seasoned professional himself, was invited to join the force.

Although initially bootstrapped for the first one-and-a-half years, Schoolguru raised USD 2 million as angel investment in the year 2014.

Schoolguru provides a managed technology platform providing Information and Communication Technology (ICT) support for universities/ courses without having them to spend any capital expenditure. This service not only handles admissions, fees and enquiries, but also includes a learning management system, offering in-house staff to universities to manage the whole system for the course.

The venture claims to be the only service provider in the distance education space which provides regular degrees (like BA, BCA MCA). Additionally, the company is also introducing skill and vocational courses along with regular courses.

On the student’s side

Apart from the printed study material, the student also receives a memory card holding an app. This app is a knowledge repository containing content, customised in relevance to the course and the university.

In case of any doubts, the in-built messaging portal in the app connects the student to the relevant lecturer. Additionally, the app is intelligent enough to identify whether the user has an active internet connection or not. If not, it seeks the user’s permission to send out the message through the SMS engine and replies are sent to the app through SMS, displayed in a graphical format. Thus, having no access to the internet is no longer a bottleneck for the student.

Currently, the startup is working with 11 large universities in eight states (Karnataka, Telangana, Andhra Pradesh, Tamil Nadu, Maharashtra, West Bengal, Assam, and Uttrakhand) offering close to 170 odd programmes in nine vernacular Indian languages. They are in further talks with four more universities in four new States, which, they hope, to get on board this academic season.

Started with a team of five members, the venture has grown into a team of 145 individuals, spread across 11 locations. The market strategy remains the same throughout: to collaborate with the biggest university in each State.

In 2015, the venture aims to target 1.5 lakh students to use their product. Within four months into the year, the startup has already achieved more than half of its target (1,00,000). Their recent sign up for a course with Yashwantrao Chavan Maharashtra Open University alone has caused them to reach that number.

The growth in this segment is exponential. The students go to the university and not Schoolguru. Our partner universities enrol close to 20 lakh students every year. Some universities might decide that online learning is a compulsory feature given to all students. Also, the universities keep adding more courses in the online mode. In the first year, a university may have offered two programmes in online mode, but may be offering 20 in online mode now. This leads to multiplication, leading to every student getting enrolled with Schoolguru automatically.

In 2014, Schoolguru clocked revenue worth 3.5 crores, with an aim this year to reach 20 crores.

In the next two years, the startup looks forward to spread its outreach to almost 25 universities, and enrolling a million students in the process. Moreover, the company plans to tap into the pool of universities abroad, especially in emerging nations like Africa and the Middle East.

Furthermore, the startup claims it will be ready with its solution before the government’s policy for regulation of online examinations is launched. The company has also partnered with the government’s Common Service Centers, which provides basic amenities at the Gram Panchayat level, to make its services and solutions more accessible.

At present, Schoolguru is in the process of closing their Series-A funding of about USD 3 million.