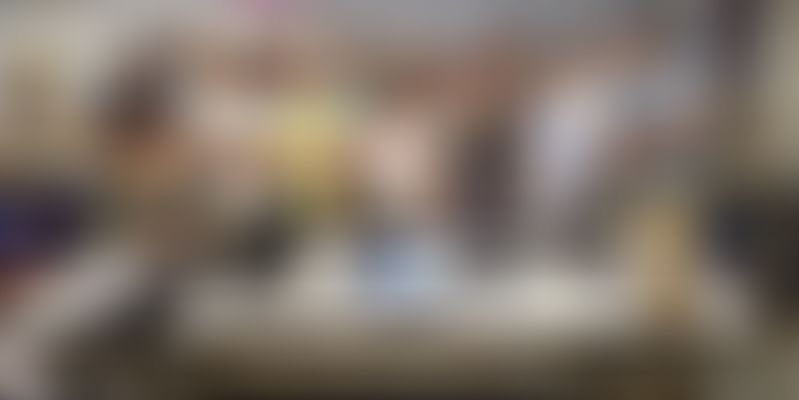 Varun Sivaram, 23 now, always had his heart on electronics. This love affair goes way back to the time when he used to walk the streets of SP Road in Bengaluru, enamoured by the electronics displayed on the storefronts.

He always believed in the unorthodox means of learning, never confining himself to textbooks. A belief that learning should encompass experimenting, and creating things while breaking a few.

After wrapping up school, unlike most of his peers, Varun chose not to join a college. Instead, inspired by an entrepreneurial summit he attended, Varun chose to start up, with an electronic testing tool. However, the venture failed due to lack of good marketing.

It was in June last year that Varun met Krishna at a 3D printing event at Jaaga, Bengaluru. At that time, Krishna too was recovering from a failed startup. It was this brief meeting which defined the trajectory of their upcoming partnership, CreatorBot.

But their story doesn’t end yet. At the recent Makerfest in Ahmedabad, officials from Intel took interest in their work and asked them to create an adapted 3D printer. The printer has been placed at the new science and innovation museum ‘Navachara Kaksh’ at Rashtrapati Bhavan, inaugurated by the President last week. It is being used by children to print 3D models such as the Ashoka chakra, Indian flag etc so they can learn about the technology first hand.

When they started up in January 2015, it wasn’t easy. According to co-founder Krishna, getting the right set of manufacturers and hiring the right talent were the challenges the duo faced.

Describing the journey from the idea to their first printer as frustrating, Krishna tells us how the wait to get the right parts for the printer could get exasperating. The duo failed five times before they could settle on the product.

However, it was the potential of the idea which got them going. Putting across an interesting perspective, the duo tells us,

When people have access to powerful tools, ideas take shape and turn into products. The personal computing revolution did just that - the knowledge and tools to create software have been democratised. Anyone with access to a computer and a credit card can start a software startup. Similar to this, we are seeing a revolution, in that manufacturing, small companies and individuals now have access to CreatorBot tools that help them prototype their ideas in the physical world with real material.

Driven by the vision to help people bring life to their ideas, their products find an audience not just in technology and design colleges but also at schools that try to foster creativity. Their products are now gaining popularity in the do-it-yourself community, as well.

Functioning as a team of five, the venture has sold 29 printers in six months of operations (since January). The firm also plans to introduce CNC routers as a part of their product range by next week. It is aiming at a target of selling 100 printers and 50 CNC routers by the end of this year.

Bootstrapped and growing at a metrics of 10 per cent month-on-month, the startup’s major clients include FabLabs, Cochin University of Science and Technology, ICICI Knowledge Park and now the Rashtrapati Bhavan.

In the coming months, CreatorBot plans to launch another printer which will focus more on the industrial sector and the professional market. Also looking at funding, the startup plans to expand its team of engineers, while providing better technology to its products.

As rightly said by the founders, manufacturing revolution is the new wave hitting emerging economies. The 3D printing market in India is projected to reach USD 46 million by the end of 2019.