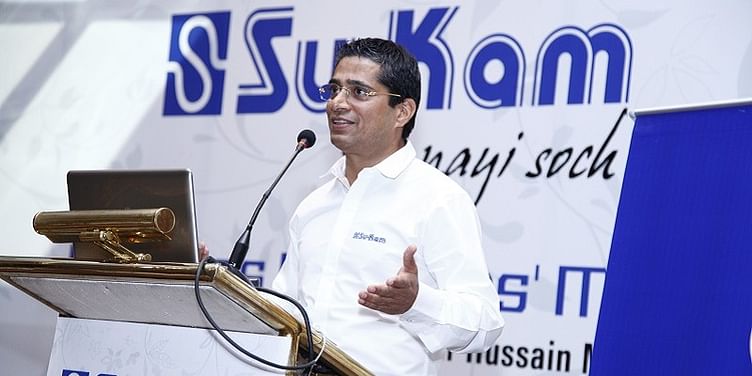 "My aim in class 12 was to become a doctor," says Kunwer Sachdeva, popularly known as the ‘Inverter man of India’. From selling pens and stationery, working in the sales department of a communication company to revolutionising the inverter industry in India, Kunwer Sachdeva's entrepreneurial journey has been long and diverse.

Hailing from a typical humble middle-class Punjabi family in Delhi, Kunwer's childhood was spent in a small home with his parents and two brothers. His father was a clerk in the Indian Railways and mother was a housewife. While Kunwer completed his primary education at a private school, he was later shifted to a government school due to lack of resources.

While he cleared his medical entrance exam, he got only 49 per cent of the required 50 per cent in the board exams. "So I repeated my class 12th from another government school and topped my school in the intermediate examination but could not clear the medical entrance this time around," says Kunwer.

It was during his college years that Kunwer got into the habit of reading, which helped him later when he would establish the inverter business. It was during this time that Kunwer, along with his brother, began selling pens and other stationery. "Selling pens was not a matter of choice for me but it was rather a need. My brother started a small pen business after his class 12 and I helped him while I was studying. After finishing college I worked with him full-time," he adds.

After finishing his higher education in law from Delhi University, Kunwer landed his first and last job at a cable communication company in the sales department.

"My first job at the cable communications company made me realize the potential of this business at that time (1988) in India so I decided to quit the job and start a cable business in Delhi which I named Su-Kam Communication Systems," adds Kunwer.

While he was good at sales, he did not know anything about manufacturing, installation process, and the technology behind it. He started with installations of CATV and MATV systems in hotels and multi-storey buildings. He says that he was conned by many people as he was unaware of the nitty-gritties of the installation process.

After being bitten several times, Kunwer learnt his lesson and started going with people and began installing the equipment with them. This not only gave him hands-on experience, it also helped him learn more about the process and equipment.

"Reading came to my rescue here as it helped me clear my concepts and also upgrade my knowledge. I then started building my team by training them myself," adds Kunwer. He says that he was lucky as the cable TV business became a necessity for every home. The demand therefore grew exponentially and by then Kunwer had gained enough knowledge about it.

He adds that it gave him the opportunity to manufacture cable TV equipment like directional couplers, amplifiers, and modulators. "My biggest investment at the time was a spectrum analyzer, an investment to better the quality and technology of my products, as I believe in improvising technology and products," adds Kunwer.

Pivoting from an established industry to a non-existent sector

The shift to inverters happened by chance. The cable TV business was going pretty well for Kunwer, but the constantly faulty inverter at his home made him think more about the power backup industry in India. "My home inverter frequently broke down and we had to call the electrician every time. One day I got so frustrated that I decided to open it up and look for the problem. I found a sub-standard PCB board. I took that to my R & D team at Su-Kam cable TV business and asked them to analyze it," says Kunwer.

Soon the team spent good amount of time looking at the quality of the inverters present in the market during the 90s. Kunwer adds that they were shocked to find that all those inverters were built with bad quality parts backed by nearly no technology. This got him thinking and he took it upon himself to understanding the technology. For this he even called for inverters from Canada (those products were not for home application) to look at the working of a sophisticated product.

"After initial experiments we decided to manufacture inverters as well, which led to the launch of Su-Kam Power Systems in 1998. On the other side, the cable TV business was booming as I had built a recognised brand in the industry but two years down the line I decided to discontinue manufacturing cable TV equipment, as I could foresee a bright future in inverter industry," adds Kunwer.

The entire team moved from the cable TV business to Su-Kam Power Systems where they started to make inverters/UPS. While in the beginning the team started with direct sales, they soon realised that this would stunt the growth of the organisation. Thus, they decided to establish a network of dealers and distributors.

Initially, Kunwer says, it was difficult to convince people of the advanced technology, as Su-Kam's inverters were one-fourth the size of existing ones and way advanced in technology and looks. However, people were drawn to my product as they saw its performance and joined Su-Kam by becoming distributors.

"I was able to lead the industry from then on as I continuously innovated and kept up with the requirement of the people. For example, my initial products replaced the need for generators in homes, then went on to innovate products that could run air conditioners and then for industrial requirement," adds Kunwer.

By 2000, Su-Kam became the first company in the world to make plastic-body inverters. Kunwer got this idea when he heard that a child had suffered an electric shock because of the inverter. This led him to think of making inverters as safe as possible because they became a part of people's houses. However, there was no plastic in the market that could withstand the high temperatures of inverters.

Soon Kunwer convinced the then GE plastics to create a special plastic material for Su-Kam's inverters. Their first plastic-body inverter, Chic, was declared innovation of the decade.Two years later, the team made India's first sine wave inverter eliminating the buzzing sound from fans and lights caused by square wave inverters and Su-Kam became the market leader. "Innovation and technology have always been our USP," says Kunwer.

People and funds - the consistent challenge of startups since the 90s

While with Su-Kam, Kunwer and his team kept mastering technology. The biggest challenge he faced was getting the right people onboard.

During that time it was hard for startups to hire good professionals because very few people would leave secured jobs in big companies to work for a startup. I remember, initially, starting with a team of five. One member of our staff was also a part-time plumber," says Kunwer.

The next big challenge was managing people; his experiences had taught Kunwer human resource skills. This helped him get more technologically trained people, retain them and make them work in a team. He says that dealing with the mindset that it cannot be done was the most difficult, as innovating new products meant a lot of experimentation and continuing with efforts despite failures.

Aligning the motivation of the team with his, proved to be a challenge at times. Though Kunwer could visualize the product to the engineers it seemed impossible. "As we started getting big and successful we found good people, and now I take pride in saying that Su-Kam is full of experts. People are now quitting jobs in foreign countries (such as the UK and the US) and long term careers in the government to join Su-Kam," adds Kunwer.

Like any other startup, Su-Kam had difficulty in getting funds. This was more difficult in the 90s. Kunwer says he was a 'nobody' – he didn't have properties to mortgage, rich parents or big contacts. He learnt from the start to raise funds on his own. Kunwer borrowed from his friends and extended family.

"There were situations where I was unable to pay back on the designated date but I never tried to run away from it and faced my lenders and requested for an extension, which I always tried to meet. I learnt that it is more important to strengthen the trust of your lenders in you by making them aware of the situation rather than escaping contact with them. In 2006, Reliance Power fund invested in my company, which was a joint venture between Temasek and Ambani group," says Kunwer.

Also Read: From Philadelphia to Mozambique: an Indian’s journey to create a socially-impactful programme

Kunwar says: “If I had to define my journey with Su-Kam in two words, those would be 'great' and 'incredible'. I cannot tell you how many times I have learned and un-learned the principles of management, ways to work with people and principles of life. Mastering un-learning is more difficult than mastering learning. Often you get so attached to your ideas and opinions that you turn blind to the reality. But if you run a company like Su-Kam, which is spread across 90 countries in the world, then you have to accept that you could be wrong. You have to come out of your comfort zone and learn things differently.”

Kunwer believes that becoming an entrepreneur has possibly been the best decision of his life. He says that for a self-made entrepreneur, every day is a new day full of challenges and rewards. He adds that it is fun to solve problems to make decisions at lighting speed.

At some point you stop caring about the money – whether you earn or not – experiences becomes more precious. You get to develop people skills. I am neither an engineer nor an MBA but I can get work done from everyone – be it a gardener, IITian or an MBA from London. If you stay in the game for long-term, as an entrepreneur you would see things evolving in front of you and it is wonderful. I have worked with three generations. From typewriters to tablets – I have seen it all."

Kunwer is now looking at bringing in a 'solar revolution in India.' His vision for the future is to see each and every house in India running on solar power in some way or the other. He believes that India is soon going to become the biggest market in the world for solar energy. Kunwer is also mentoring startups. He says that Indians have always been innovative and it's good to see the world recognising it.

It was a distant dream when I started. I want to nurture young entrepreneurs in India," says Kunwer.

Kunwer has also invested in a startup based in Hyderabad that makes solar LED lights.