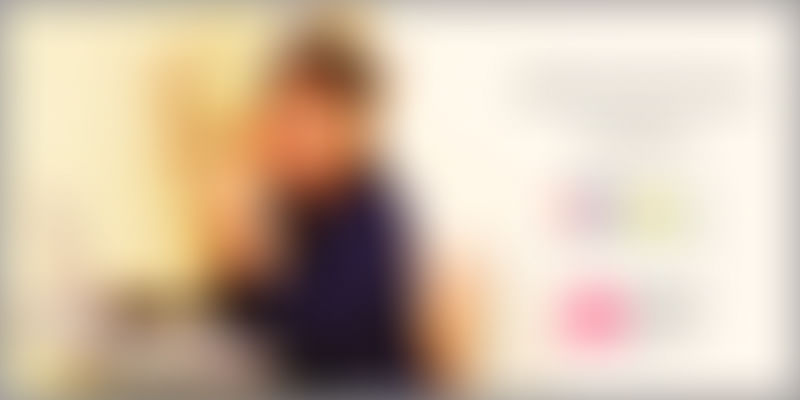 This article is sponsored by eBay

Shruti Jaiswal grew up in the midst of a loving and close-knit joint family in the temple town of Varanasi. As one of the youngest, she was indulged by her parents, her brother and various uncles and aunts. However, unlike many young people, she was, from a young age, aware of the privileges she enjoyed because of the family she was born into. Others, she knew, were not so fortunate. Women from the lower socio-economic strata of Indian society, especially in relatively conservative places like Varanasi, had to work doubly hard to achieve anything for themselves.

Shruti was just out of school when a chance conversation with a few women who worked as domestic help in the area she grew up in, opened up a new direction in her life. “These women wanted to start a tailoring unit,” she recalls. “But unsupportive husbands and societal pressure to first mind their home left them with no choice but to put aside their dreams.” The conversation set her thinking and a plan took shape, eventually becoming her first venture, ClutchOn in 2009. Shruti was only 19 then.

ClutchOn gave underprivileged women, including the ones Shruti had spoken to, the opportunity to make and sell handmade bags. She had them trained in stitching, knitting and the basics of running a business to make their venture self-sustainable. Shruti herself planned to study further and moved out of Varanasi. ClutchOn no longer exists, but all the women who were a part of the venture today work with other tailoring units; one even runs her own business.

In 2014, having completed a post-graduate course in Rural Management from Xavier Institute of Management, Bhubaneswar (XIMB), Shruti was hired by one of India’s top banks. In a month she realised her heart wasn’t in it. While doing the course, Shruti had travelled across small towns and cities for various projects and experienced first-hand the problems faced by women, especially those trying to improve their lot in life. It was time to do something about what she had seen.

During her social entrepreneurship classes at XIMB, Shruti had developed the concept of RooohServe and registered it in a competition called “The Green Store Challenge”. The concept made it to the finals and won her a scholarship to carry out research and further develop the project in Germany. However, the high cost and her parents’ wariness about her moving abroad on her own led her to turn down the offer.

They say you can’t repress an idea whose time has come, and Roooh (as it’s popularly known) took root in Shruti’s hometown itself. It gives underprivileged women the skills they need to bloom as artisans, crafting and creating beautiful Indian ethnic wear including traditional and contemporary sarees, lehengas and suits, all with elegantly and painstakingly executed embroidery and other embellishments. The driving principle behind RooohServe is to ensure that artisans are paid fairly and give the customer value for money.

“It is a guilt-free shopping experience for customers,” explains Shruti. “They get to wear their dream outfits and help the ones creating those outfits.” Getting this idea across has been the biggest hurdle so far. Ironically, Shruti has also faced the problem of being “too young” for people to take her seriously. “At one point, I even changed the way I dressed so that I would appear older!” she laughs.

From a humble yet enthusiastic beginning in September 2014, Roooh has grown rapidly. From just 10 orders a month to begin with, it now gets 7-10 orders per day. The 9-person team includes six artisans, one logistics specialist and one supervisor, apart from Shruti herself.

A day at Roooh is filled with discussions. It is less of a team in the traditional sense and more of a large family. People stick together, helping each other with their personal problems too. It’s what makes the place comfortable, re-assuring and empowering. The workshop is a second home, sometimes more loved than their own homes. It is a place where they can forget all that they have been through and just be normal individuals. Nobody looks at them with pity for what they have undergone; it is a sisterhood born of hope for a bright future.

“It’s not just about providing them a skill or a job or an income,” says Shruti, “but about giving them something that will provide sustainable growth for years to come”. She has helped them get their Aadhar cards and enrolled them in schemes like the PM’s Jan Dhan Yojana. She’s also arranged for them to attend tailoring and design courses to sharpen their skills. The women now clearly understand the importance of being financially independent and being in control of their own lives. There’s also counselling to ensure team members do not fall victim to middlemen who might attempt to exploit vulnerable women.Reena, a young artisan at Roooh, is somewhat shy when I tell her I want speak to her about her work. And yet, when she begins talking about her work and her skills, her voice is alive with optimism. She’s come a long way from the domestic violence she endured before she was abandoned by her husband. Reena was depressed for a long time after that. When she returned to her parents’ home, she was seen as a burden. A chance meeting with Shruti at a sewing centre was the first step to turning her life around. Even after joining Roooh, it took her time to move beyond the trauma she had endured. Today, she dreams of living on her own and marrying again though her brothers don’t want her to (she earns more than them and the family would lose out on her income!).

This is exactly the type of difference that Shruti dreamed of making through Roooh. In the long run, she wants to ensure that becoming self-sufficient and successful will bring about a behavioural change among the people she works with, that women artisans will be treated at par with men in terms of not just pay but also respect. And in doing so, she wants to bring the charm of locally made, hand-crafted products using traditional techniques – many of which are fast disappearing – to a larger market.

Online marketplaces provide them the right platform – RooohServe sells on many of them and has recently registered on eBay. These channels have helped women like Shruti to embark on her passion with a minimal capital of Rs 13,000 and a potential nationwide customer base.

Already, Shruti’s venture has begun getting the attention it deserves – she has been chosen as one of the six winners of eBay’s SheMeansBusiness contest.

Roooh is slowly coming into its own though for Shruti it will always be her baby. The young entrepreneur is engaged to be married soon and says the upcoming wedding will make no difference to her aspirations as a businesswoman. I gently quiz her about whether her priorities might change and the reaction is one of outrage. “Men are never asked such questions,” she says pointedly.

Shruti seems to be the living embodiment of Rumi’s words, ‘When you do things from your soul, you feel a river moving in you, a joy.’ After all, the word Roooh is derived from the Urdu/Farsi word ruh, which means soul or spirit. Indeed, everything made at RooohServe stems from the soul of its artisans who find immense joy in their creations.