How this actor’s search for forgiveness sparked a business idea 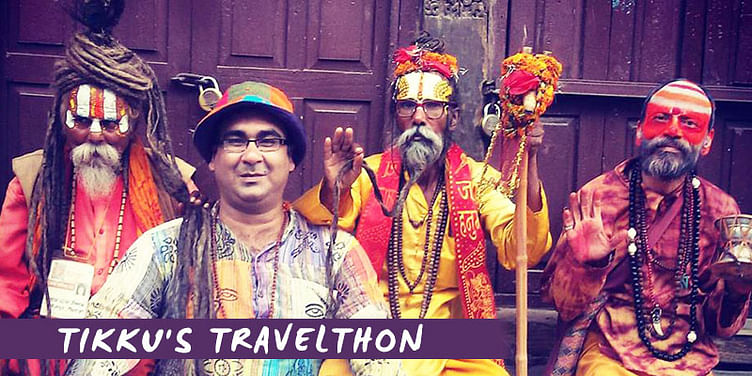 ‘Yes sir, I killed my dad!’ Not just a line from his poem, but the burden of guilt that Anuj Tikku carries in his heart.

Three years ago, Anuj Tikku, a successful actor, all set to appear on the big screen, was freeze-framed by a bizarre turn of events that changed his life forever.

“I had black cloth over my head, news photographers all around me, trying to get a picture of me! I was making the national news, and for all the wrong reasons,” he says as he recounts the day he was arrested for the murder of his father.

Anuj has acted in Anurag Kashyap’s movie, No Smoking. His claim to fame until then was the Havell’s ‘Shock Laga Laga’ series of ads. After six years of hard work and 65 commercials, Anuj was excited about a career in Bollywood. On the night of 7 April, 2012, however, everything changed. His father, Arun Kumar Tikku, was spending the night at his apartment in Mumbai before returning to Delhi the next morning. He didn’t last the night. Armed men broke into the flat and murdered him.

Anuj had accidentally befriended a criminal. He’d also agreed to rent out his apartment in Mumbai to this man. The friendship (for the man) was merely a ruse to take over the flat. Anuj’s father had arrived from Delhi out of the blue to know why Anuj was renting out the apartment and who it was being rented out to. That evening, the tenants turned up, saying they wanted to paint some parts of the flat. Once Arun let them in, he didn’t stand a chance.

‘… Attacked from behind, he was held on as long as he could. Cried out for help, beating the window pane. Banged the door open to see humanity’s hour of shame. He cried out for help and I was nowhere in sight,” – more lines from one of Anuj’s poems, describing the tragedy.

By the time anyone noticed, the murderers had escaped and it was too late for Arun.

Anuj, at this time, was in Goa with the ‘friend’ to whom he was leasing out the flat. He’d been taken there for a ‘short vacation’ but was drugged without his knowledge. The plan was to finish him as well. “Had my father’s murder not been detected in Mumbai, he would’ve murdered me in Goa,” says Anuj. “I think the only reason they let me live was because they knew my father’s murder had been discovered and the police would come looking for me. He didn’t want two murders on his head.”

While Anuj was drugged, his phone was taken away, making him ‘unavailable’. The police, however, soon caught up with him in Chiplun. They realised the state he was in, and eventually dropped him as a suspect in his father’s murder.

“I remember coming home and standing under the shower trying to pick up the soap for five hours, and just couldn’t pick it up. My entire body went into a shock,” he tells me over a long conversation in Bengaluru.

Anuj moved out of Mumbai and stayed with his grandparents in Dehradun for a while, trying to derive hope and solace while he struggled with survivors’ guilt. He blamed himself for what happened. “I kept thinking had I been there, or not done something, he would’ve been alive.”

He took to writing poetry and visiting places he had visited while growing up. A year later, Anuj sold the flat and in 2014, he began his tryst with travel, starting with Chardham and the Amarnath yatra. He travelled from Jammu and Kashmir to Kanyakumari and from the North East to Amritsar and the Wagah border.

His humility is visible. A man who lost everything he had and wants to give love back to the world. He has spent over 120 days in 12 countries (Cambodia, Vietnam, Bali, the Philippines, Maldives, among others) and wants to cover over 200 countries in the next seven years, for what he has named Tikku’s Travelthon.

tikkustravelthon.in documents and provides unique live travel experiences through photos, videos, blogs, and travelogues. He is currently in talks with travel sites like MakeMyTrip, HolidayIQ, and Travelgenie to provide sponsored content that go beyond simple text to sweeping narratives that truly bring alive a destination. And it isn’t going to be a picture-postcard-in-text type content because Anuj doesn’t shy away from talking about his explicit experiences.

He chooses to segment his experiences around spirituality (religion); passion (sex); food, night life, and adventure sports on his website.

In the works is ‘Travel with Tikku’ where people can travel with Anuj as their personal tour guide. He’s clearly excited, even scribbling in my notepad to show me his plans. Today, Anuj has much more to share with the world. His world moves fast and burns bright. And every city, every street adds a new experience to his story.

It hasn’t been easy for him to begin trusting people again. “I realised that there is no other way but to trust. You cannot live as an island. Whatever love you have, you share it with the world. I don’t have a family so the world becomes my family. The only way is to love the world and you’ll receive it back.”

This spirituality is what liberated him. At Kedarnath, which had been destroyed by flash floods, the only thing that remained was the 'Bheemshila' – a massive rock that fell right in front of the temple, blocking out the flow of water and changing the course of the river away from it.

During his visit, Anuj sat with a few aghoris, who were at first taken aback by his humility to approach them and talk to them. These conversations became long discussions, and Anuj told them of how he felt responsible for his father’s murder. One of the aghoris had a unique perspective, “Aapke pitaji aur Bheemshila mein kya farak hai! Woh aapke Bheemshila thhe! (There is no difference between the Bheemshila and your father. Your father was your Bheemshila).”

That simple remark liberated Anuj from the burden of guilt he had carried with him until then. It showed him that there are no guarantees in life and that every life has a purpose.

Anuj feels lighter today, but there is a part of him that hasn’t forgiven himself. As his poem says,

“But why did he suffer for my sins, I ask. You were his son, you fool, and it was his task. I owe my life to him, which he sacrificed for me. So have no doubt, my friend, it was me who killed my dad.”