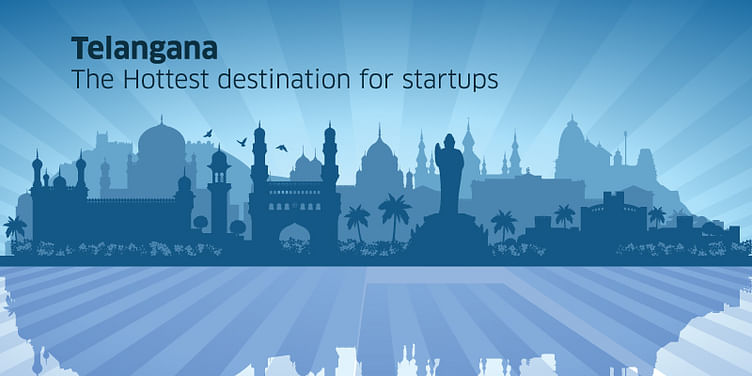 Entrepreneurship is palpably contagious and it hasn't spared the youngest and the 29th State of India, Telangana.The capital city Hyderabad is considered the largest IT Hub in India after Bengaluru. This State now seems to be aggressively imbibing the spirit of entrepreneurship among the youths by taking a plethora of initiatives for the startup fraternity. It is being operated with the mindset of a startup in order to capitalise on the opportunities to expand IT presence.

K. T. Rama Rao, State Minister, Panchayat Raj & IT, Telangana, stated that the Telangana government has launched an initiative called THub, a technology incubation centre at IIIT-Hyderabad campus in Gachibowli, Hyderabad. The centre will allow the local startup community and investors to network, learn, communicate, share and make deals. The second phase of the T-Hub, the country’s largest incubator for startups, is expected to come up in next three years at an investment of at least Rs 150 crore.

We believe that THub is definitely going to be the platform where people can walk in with ideas and walk out with the product. We have partnered with Indian School of Business, IIIT-Hyderabad and Nalsar University of Law for business, technology and legal mentorship respectively.

Moreover, the government has launched Telangana Academy for Skill and Knowledge (TASK), a non-profit organisation for the industry and academia with an objective to offering quality human resources and services to the industry.

Hyderabad, in the past one year, has become successful in attracting all the biggies in the e-commerce industry. E-commerce giant Amazon has opened its 2,80,000 sq.ft. fulfillment centre in India at Kothur in Telangana.

Rao said that Amazon will build a 2.5-million sq.ft. campus in Hyderabad, which will be its biggest outside the United States. The new facility is likely to help SMBs of Telangana to run their business at lower operating costs.

E-commerce giant Flipkart has launched its largest automated fulfillment centre in Telangana taking the total number of its warehouses in the country to 17.

The fulfillment centre, located in Gundlapochampally in Medchal Mandal of neighbouring Ranga Reddy district in the State, is spread over 2.2 lakh sq.ft. and holds storage capacity of 5.89 lakh cubic ft. The new facility would create over 17,000 direct and indirect employment opportunities within the area.

Rao said, “We have also turned our focus on the gaming and animation sector. Amazon Web Services, Microsoft and more are to set up cloud-based data centre in Hyderabad. In the last one year, we have been able to attract IT majors like Google, Uber and Amazon.”

He also added that the State’s increased focus on big data, data analytics, IB security, ESDM and manufacturing sector has also many mobile companies which includes Micromax and more. Even the hardware makers are also being encouraged to set up manufacturing facilities in two electronic hardware manufacturing clusters spread over 600-700 acres in Maheshwaram Mandal on the outskirts of Hyderabad.

“We are also sensitive to the changing dynamic in the IT industry in terms of how the new-age knowledge companies and new-age product companies that are taking over the conventional IT companies. We have an emerging and dynamic situation in our country right now,” said Rao.

Improving digital literacy in Telangana will play a key role in making the State the largest IT hub in India. Along with Telangana drinking water project (which envisions 1,15,000km of pipeline all across the landscape, the State has also launched fibre optic which would make Telangana the first State in the country to provide a digital broadband connectivity to the 8 billion household in the entire State to make it the most connected State in the country in terms of digital infrastructure.

“With our effort we prove our digital literacy as well as a part of the digital literacy mission we are hopeful of each and every household having at least one literate person. There are lots of opportunities in Telangana in terms of business expansion. This is a premier destination for IT after Bengaluru and Pune. We are doing lots of things which are different from conventional business practices,” added Rao.