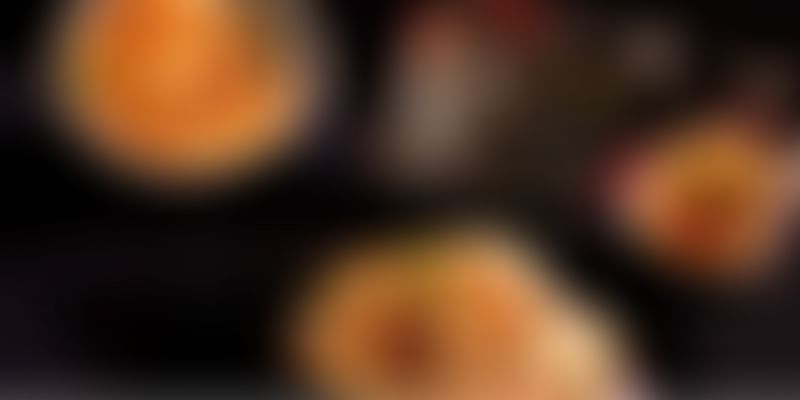 Before the food tech space evolved, food ordering and delivery was restricted to only a few cuisines, especially Indian food varieties. And the ones that topped the chart was pizzas, especially Dominos. Even today, there are few who have been able to work around the Quick Service Restaurant (QSR) model as efficiently as Dominos, mainly because getting the menu and tastes standardised is a challenge.

It was to take the QSR model dominion away from pizza chains that Anurag Mehrotra and Krishnakant Thakur from LionVentures started Charcoal Biryani. Anurag, is an MBA from AIM Manila comes from the financial services background. Krishnakant Thakur is an MBA from IIM Bangalore also comes from the financial services background. The duo over the last three years are co-promoting various ventures under LionVentures.

The idea germinated when they met Mohammed Bhol, a chef known for his product expertise in biryani and comes with experience across establishments in UK and India. The trio soon realised that there was yet a full-stack QSR venture for consistent, hygienic, and authentic Indian food to be established.

Indian consumers are mindful of a pizza and a burger chain; however, when it comes to one of India’s favourite food like biryani in a QSR format there is no national brand that exists. “This is the opportunity that team Charcoal Biryani wants to go after. Food quality and consistency, technology as a facilitator, and efficient delivery are the three pillars through which the team aims to reach out to the mass consumers and have a PAN India presence,” says 34-year old Krishnakant.

The team ran over 500 product feedback sessions across the age groups. When they reached on a mass acceptance of the product, they decided to put together the missing pieces, like large scale manufacturing support, efficient logistics chain, full stack technology, and last mile delivery partners.

“The eureka moment was the realisation that with consistent product through large scale manufacturing, dependency on kitchen/chef could be eliminated,” adds Krishnakant. One of the biggest challenges faced by any restaurant model is consistency of food at a large scale and high fixed costs.

Standarising and bringing in consistency

When Charcoal Biryani was faced with this challenge, it decided to think of a large scale just in-time manufacturing, efficient logistics, fixed cost light model at the front end, and a quick home delivery concept.

“This was made possible by an exclusive partnership with a global giant in food manufacturing. We have expanded our operations with six variants of biryani across Mumbai, delivering from Colaba to Borivali, with a lean model at the front end and strong tie ups on the delivery front,” says Krishnakant. The global giant seeks anonymity.

Workings and the add-ons

The biryani recipes are standardised and use the manufacturing chain to manufacture consistent quality and similar tasting biryani, which is delivered to different parts of the city. The full technology stack with consumer (web, app) and backend interface (point of sale, inventory management) was developed by Gautham Singh, a graduate of ISM Dhanbad and IIIT Bangalore.

Mikhail Shahani, a chef of international repute, later joined the core team to bring in expertise in new product development and is responsible for creating a strong product pipeline for the company.

While the team had the choice of stitching together the existing technology modules available in the market, they decided to build the entire technological stack of the business in- house. As they needed greater flexibility and criticality that could be controlled by the team.

In September 2015, the team had a soft launch of Charcoal Biryani and claims to see a 10x growth since then and has even opened up to eight locations in Mumbai. “The company expects to clock a 100 per cent month-on-month growth in the coming months,” says Krishnakant.

He adds that the team believes that apart from the high quality food, customer experience has to be perfect right from ordering to the delivery. “This makes the brand association high in consumers mind and is a big differentiation for Charcoal,” adds Krishnakant.

The product comes in a small disposable box with clean packaging. The consumer can order from Charcoal Biryani through web, app, or the call centre. The order is then routed to the respective store nearest to the customer from a centralised location. The company has tied up with various delivery service providers, which helps it in faster turnaround.

The team has raised an undisclosed angel round from HNI. They aim to deliver at all locations in Mumbai by expanding to other parts in another 60 days. The team is working to expand in cities like Bengaluru, Pune, and NCR. They are also working on new product development and has a strong product pipeline.

Dominos has broken in through every link in the chain. Ajay Kaul, CEO, Jubilant Foodworks at NPC, says that Domino’s has evolved to a stage where every consumer is a segment. So, now every time a stimulus is thrown, the systems are able to analyse the kind of response each consumer will provide.

There are approximately 30,000 employees of Domino’s pizza of which approximately 20,000–25,000 are consumer-facing. Domino’s is looking to provide these employees with devices that will enable payments, GPS tracking, and feedback among other things. How far Charcoal Biryani can crack this for an Indianised food product is yet to be seen.

This space is being viewed by several startups like EasyKhanna. There also is Ammi’s Biryani and Nawab Sheikh in the segment of biryani takeaway and delivery segment.