Riding the Industry 4.0 wave - Design for India’s Internet of Everything 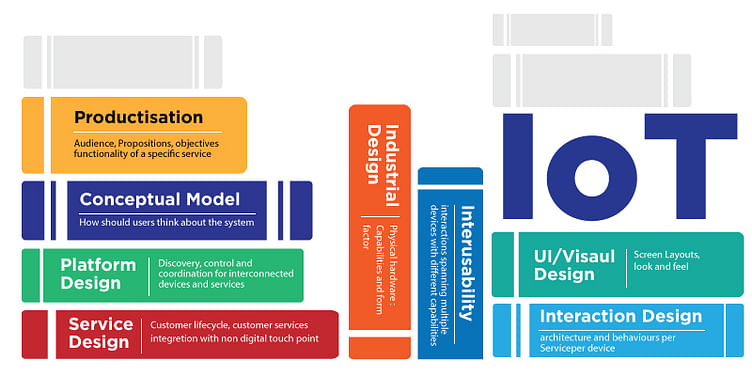 "As an architect [designer], you design for the present, with an awareness of the past, for a future which is essentially unknown." ~ Norman Foster

IoT (Internet of Things), often dubbed the fourth industrial revolution or Industry 4.0, is taking over our lives by connecting a slew of devices, from refrigerators and thermostats to irrigation and traffic management, to the Internet. Over the last five years, IoT startups have garnered investments worth $7.4 billion, cumulatively, and have more than doubled their funding over this period. This trend is only going to be on the rise, with sensors getting embedded in every physical object, coupled with artificial intelligence, robotics, and analytics capabilities. Marketing will take on a whole new dimension as IoT permits brands to listen and respond to the needs of their audience. With its limitless scope of application in everything from health, and agriculture to manufacturing, it’s little wonder that VCs are backing IoT startups, and entrepreneurs are wanting to be first to the finish with their IoT-related offerings.

As of 2011, there were 12.5 billion devices connected to the Internet in the world, nearly twice the global population of 7 billion. According to Gartner, by 2020, Internet-connected devices are expected to number 26 billion (other estimates peg the number at 50 billion), globally. This is expected to result in an estimated $1.9 trillion in global economic value-add through sales into a variety of end-markets. And, with a billion-plus population and 462 million people expected to be online by June 2016, India stands to significantly benefit from this wave.

Why design in India

With all the government support and enthusiasm surrounding Make in India, the time has never been more right to ride this wave. Soon after Prime Minister Narendra Modi announced the Make in India initiative, Qualcomm® announced its support of that mission via its Design in India Challenge. Qualcomm®’s support for this new wave is further evident given that Qualcomm® Ventures is the world’s second-most active IoT investor.

Speaking about the Challenge, Qualcomm India President Sunil Lalvani had said: “Our goal is to fully support the Government of India’s vision of ‘Make in India’ for electronic products. But, this is only possible if the value chain starts with product ideation, followed by prototyping, before moving to DFM stage and mass production by the EMS.”

India has built a reputation for technology services, and in recent times, we’ve started witnessing the emergence of the startup generation.

IoT is a wave Indian startups can truly ride, but for this to happen, Indian startups need to take advantage of the Make in India campaign and couple it with the need to Design in India. For manufacturing to be enabled, the design funnel needs to be energized. The government has announced a plan for 100 smart cities, where IoT will be playing a core role in the running of intelligent/smart systems related to

In the next couple of years, more devices will work together than ever before, leading to an increased likelihood for things to get complicated. This is why design becomes really important. The solutions for the daily running of Smart Cities has to come from within and not from outside. In the context of IoT, we in India need to design solutions suited to our needs, because we understand our daily lives better than anyone outside the country.

Where’s the action going to be?

Just as the mainframe wave belonged to IBM, the desktop wave to HP and Dell, and the mobile wave to China, Korea and Taiwan, the next decade will see companies (or perhaps just one company) with distribution capabilities to bring sensors to billions emerge at the top of the hardware heap. The next phase of IoT will show its many physical forms, and innovations will happen at every level of the stack (see diagram).

Innovations being worked on (at some level of the stack)

The consumer IoT in India

The first criterion for anyone wanting to design for IoT in India is the desire to address a problem that the masses face and solve issues they care about deeply. And this has to be done while keeping desirability and ease of use in mind. Good design doesn’t have to be shiny and expensive.

So, how do you design hardware and an engaging UI/UX?

Today’s consumer needs products, not tools, and most things in the IoT fall in the latter category. Put very briefly, first, figure out a tangible problem to solve. Next, keep the conceptual model simple and make distributed interactions feel coherent by seamlessly managing the complexity of interconnected systems. Some of these complexities can be overcome if there is standardization. And in the absence of standardization for IoT, using open standard frameworks will, in all likelihood, help in easing the friction between these systems. But that’s another story for another day.