How Bengaluru-based Vindhya has changed the lives of 1,500 differently-abled people 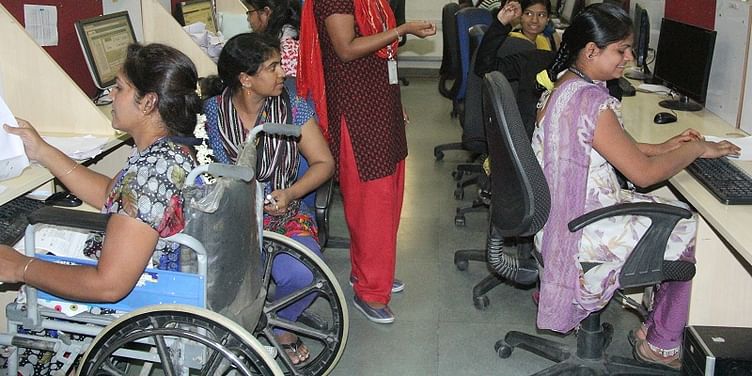 In the last decade, we haven’t lost a single customer. In fact, every new customer that has been added came through one of our existing ones.

Pavithra YS (now 31) is a first-generation entrepreneur. A commerce graduate, she married Ashok Giri at the young age of 21. The couple had different ideologies – Ashok was inclined towards business and Pavithra believed in philanthropy. When she expressed a desire to do something, the only thing Ashok said was “Do something big”. And that’s what Pavithra did – she married their ideologies and founded Vindhya E-Infomedia – a Bengaluru-based BPO that enables the differently abled. A decade into Vindhya, Pavithra and Ashok (who joined her full-time after one and a half years) have grown the organisation from three people to 1,500, with a projected revenue of close to $4.2 million for FY 2015–16. This is her first job, and the only she would ever want to have.Pavithra says,

One of those days when we were brainstorming, I happened to see a disabled man cross the road and I wondered how it’s difficult for them to get in to mainstream. That’s how Vindhya was born. Neither of us have personal stories or experiences with persons with disabilities (PWDs) nor did we want to give back to the society. Our goal was to change lives for the better.

Pavithra’s first stop was a vocational rehabilitation centre set by the Government of Karnataka who were willing to train people for her. She then built connections with various non-profits across the city, found an office space and hosted a simple banner outside – ‘Data-entry operators required. Only people who are physically-challenged should apply’. Her first two employees were two women with over eight years of experience. But, they had a hearing impairment and the entire conversation was through pen and paper. Pavithra recalls, “I really liked them and there was no way I was going to let them go. So I learnt sign-language for them.” That’s how Pavithra decided to employ people with all forms of disabilities. She smilingly says,

We found solutions as the situations arose.

In another instance, a wheelchair-bound man applied and Pavithra was unsure how he would climb the stairs to the office every day, which was on the first floor. But he convinced her by utilising his hands to climb up. That day, Pavithra ascertained Vindhya’s philosophy,

Attitude over education, for the latter can be trained.

Their first customer was a city-based florist who gave them the task of digitising 5,000 addresses. But the big break arrived when Wipro gave them a contract. Things were good for the next one and a half year until they faced a financial crunch.

I requested our employees (16 of them) to stop coming until we found few customers. But they didn’t leave us. They wanted was to provide an accommodation nearby, as some were traveling 20 km one-way. We then opened up our conference room for them and even started supplying meals at a subsidised rate.

The practice follows even today.

While convincing corporates to outsource their requirements to Vindhya was tough, Pavithra found the differentiator – reducing the turnaround time (TAT) drastically. She explains,

Take the microfinance industry for instance where women need money urgently. It becomes critical that their loans must be processed within 24 hours and for some it’s as less as six hours. We brought in processes that ensured we meet the required TAT. That and our quality services helped us grow immensely.

Today, Vindhya is the preferred BPO in the banking, financial, and IT industry boasting clients such Wipro, SAP, Schneider, Yes Bank, Janalakshmi Bank, and IndusInd Bank to name a few – all of whom never felt the need to look for another service provider.

Vindhya has a two-pronged approach. One is they work with non-profits nationwide to identify PWDs and absorb them. The second is they conduct job camps in Tier II cities either with the help of non-profits or existing clients.

Once, people are on board, the HR team assesses their skills, type, and level of disability. Pavithra says, “These are important to understand what type of job should be assigned to them. For instance, the hearing and speech impaired will only do data processing.” Post the assessment, they undergo a rigorous training modules. Combined with live sessions, there are a number of training manuals to support – Braille, English and regional, sign-language, pictorial, etc. A certification at the end of each training is given and when they are shifted to their desks, a buddy is also allotted. This increases their confidence as there’s someone to teach and not assess along the way.

From monthly birthday celebrations to festivals, Vindhya does everything to ensure its employees are happy. But the highlight is ‘Coffee with Pavithra’ – a monthly session which brings together Pavithra, and around 30–40 employees, both old and new to talk about their journeys, passions, and dreams for the future. Pavithra says, “The idea is to ensure that they see me as one among them and that they can approach me anytime. We are all together in this journey.”

Vindhya also offers counselling sessions through its programme ‘Dhwani’, wherein the senior members and external counsellors aid the employees. Another heartening initiative is that every employee who’s below the level of manager, has their child’s education sponsored by the company. Pavithra proudly says,

It’s reassuring to see some of them move out of Vindhya’s accommodation, find their own home and build a family.

Srinivas is one such employee who had to amputate his hand after coming in contact with a live-wire. He was just 16 years old and was working as a plumber. Pavithra recalls, “Being born with disability is different, but experiencing it all of a sudden has a deep negative impact. Srinivas went in to depression and didn’t step out of his home for a long time. When he finally came to Vindhya, we trained him as our front office receptionist and taught him basic English as well.” Today, after five years, Srinivas manages the entire administration team. He is married and has a one-year old daughter.

A company that initially started with the thought of employing only physically challenged, went on to work with all forms of disabilities – physical, hearing and visual impairment and even border cases of autism. Recently, they started employing transgenders as well. In the next four years, Vindhya hopes to open centres in other cities, employ at least 5,000 people and start serving global customers.

Our focus was straight – to work with people who lack mainstream options and provide a life of dignity. And along the way, I have learnt that embracing positivity and perseverance made all the difference.