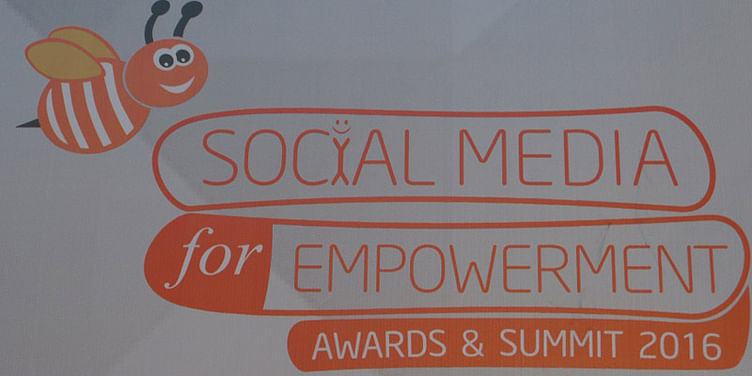 The third annual Social Media for Empowerment Awards, held this week in Delhi by the Digital Empowerment Foundation (DEF), honoured 19 winners out of 266 nominations drawn from across South Asia.

“Most of the entries for Social Media for Empowerment Awards this year came from smaller cities. Social media has opened the gates of imagination for self-motivated and self-driven individuals in smaller towns,” said Osama Manzar, founder of DEF. (See also YourStory’s coverage of DEF’s earlier Manthan and mBillionth awards.)

The conference drew over 500 attendees for the interactive panels showcasing the finalists, and workshops on social media. The day ended in fine style with a folk music performance by artistes Maherdin Khan Langa and Umer Farukh, who themselves are using social media to keep alive rural and folk music forms from Rajasthan.

Here is the list of winners and special mentions for the 2016 edition of the Social Media awards; click through to the organisations’ links for more details and contact information.

Breakthrough is a human rights organisation seeking to make violence and discrimination against women and girls unacceptable. It has runs social media campaigns such as asking common people, “What have you done to respond to sexual harassment?” It aims to empower women to talk about sexual harassment and sustain the conversation through social media. For example, the ‘#AskingForIt’ campaign advocated safe travel rights at night.

Red Dot Foundation aims to crowd-map sexual violence in public spaces by conducting awareness workshops for different age groups on sexual violence and legal rights. Safecity is a platform that crowdsources personal stories of sexual harassment and abuse in public spaces to make public spaces safer and equally accessible to all. This information then gets ‘crowdmapped’ to plot and monitor location-based trends, which can be shared with police. The site is active in India, Kenya, Cameroon and Nepal.

BitGiving is an online crowdfunding platform that supports entrepreneurial ideas, creative minds and social issues. It was founded in 2013 by Ishita Anand and Fahad Moti Khan, and has actively been raising funds for the India Ice Hockey team to compete internationally; preventing Friendicoes from shutting down; and raising Rs. 40 lakh in four hours for rebuilding Chennai. 'Stop Acid Attacks' raised money from the crowd to become one of the biggest voices against acid attacks in India.

Wishberry.in provides a platform for creative artistes to raise funds for projects in film, music, theatre, publishing and apps. The Wishberry blog helps impart knowledge to artistes; it teaches them how crowdfunding is helpful to them and why they should take it up. A team of consultants is involved in the process of guiding the fund seekers in the areas of public relations, social media marketing and email marketing. Wishberry has helped more than 250 artistes raise over Rs. 6 crore from 12,000 funders (also see YourStory’s workshop coverage, ‘Go fund yourself’ – 10 crowdfunding tips from Anshulika Dubey, Wishberry').

Transparent Hands is a crowdfunding platform that is involved in conducting surgeries on poor patients in Pakistan while ensuring transparency and one-to-one connection between patients, donors and hospitals. So far, it has successfully financed the surgeries of more than 180 patients and many more are waiting to be operated upon. Transparent Hands hopes to expand its services across the entire country in order to facilitate the maximum number of needy people.

Puppetica Media is crowdsourcing an animated Sanskrit movie project called Punyakoti. It is conceived by Sanskrit lovers at Infosys and leveraged a social media start-up, Launchpad, to execute the strategy. There was clear segmentation of the audience and unambiguous messaging, along with analysis and flexibility to alter the strategy depending on the needs of the project.

Annakshetra Foundation collects leftover food from ceremonies and functions and makes it available to those in need through a network of volunteers. Each citizen is regarded as an ‘Anna Doot’ (messenger of food). The donors are mainly restaurant owners, caterers, marriage garden owners, as well as schools and residential complexes. Till date, Annakshetra has fed more than 14 lakh people from the surplus food. It has launched other similar projects in parallel such as ‘Tiffin Annakshetra’ and ‘The Sustenance Fridge.’

Compassionate Kozhikode has been launched by the Kozhikode district administration in partnership with civil society groups, government agencies and citizens. The aim is to promote volunteering to create an inspirational destination. It envisions a ‘No cash, kindness in kind only’ team to support altruistic and corruption-free behaviours in citizens.

The Agni Foundation has leveraged social media for relief work during the recent devastating floods in Chennai. The group of 25 core members and 1,500 volunteers mobilised relief material worth Rs. 818 lakh distributed across 67 locations in Chennai. Apart from 28 corporates, more than 1,000 individual donors from across the globe contributed the relief materials.

Aangan Trust is a child protection organisation working towards building safe communities for children. It works in some of the most backward districts across six states with children vulnerable to child marriage, hazardous work, trafficking, violence and abuse. It uses social media via campaigns such as #ActNow to build safe neighbourhoods, and videos themed ‘Are you listening?’ to tackle issues of child labour, child marriage and safety in schools.

CHILDLINE India Foundation promotes children’s rights via ‘I Pledge for Child Rights,’ a social media pledge and awareness campaign. It created a buzz surrounding issues of child rights and child protection across various social media platforms. About 43 per cent of India’s population of 1.20 billion is below 18 years of age. Of these, 40 per cent or about 200 million are marginalised due to abuse, exploitation, disability, disease, poverty, and calamities.

Goonj leverages social media to turn the age-old tradition of giving old material as charity into regular and dignified giving. It deals with over 2,000 tonne of materials every year. Its initiatives include Cloth for Work (as reward to rural communities who come together for various development activities like road repair, digging of wells, cleaning ponds), and Not Just a Piece of Cloth (tackling menstrual health and hygiene). It has also assisted with systematic relief and rehabilitation work carried out after disasters.

Karnataka State Road Transport Corporation (KSRTC) pioneered Web-based passenger seat reservation systems, and facilitated bookings of over 25,000 seats and 2,000 tickets daily through a mobile application. It has won the ‘Award of Excellence’ for six years in a row by the Ministry of Urban Development, Government of India, National e-Governance Award, National Transport Excellence Award, and Geentech HR Excellence Award.

DestaGlobal is a social enterprise with the goal of improving livelihood of farmers in rural India, by providing them with information, innovation and technology via offline events called Desta Mela and social media engagements such as DestaTalk. Over 20,000 farmers from Maharashtra have signed up. The in-house team of agro-experts creates informative posts about crop schedules, nutrition, diseases, livestock management and sustainable agriculture. It also conducted an online photography contest among farmers.

‘Waqt ki Awaaz’ community radio was promoted by Shramik Bharti in Uttar Pradesh. It acts as the community’s own medium of communication for dialogue, information and knowledge sharing, and citizen action for empowerment, equity and equality. All its producers, grameen reporters, artists and musicians are from the local community. Programmes are produced in local dialects in order to establish better relationship with the community.

The portal OurKPK.com focuses on citizen issues of the Khyber Pakhtunkhwa province such as education, social awareness and politics. A team of dedicated social media enthusiasts work 24X7 to update the portal and its social media accounts. The site has collected more than 2,000 stories focusing on professional and social life of its members.

Hyderabad City Police Department aims to deliver citizen services through mobile technology, via initiatives such as ‘Hawk Eye.’ It empowers members of the public to become citizen police. It integrates the police communication network system for prompt response to citizens. It also serves as a tool in improving the operational efficiency of the police. Features include an SOS button for accessing help in emergencies and for ensuring women’s safety while travelling.

The Cyber Blog India has published over 130 posts online on different issues spanning cyber security, law and forensics. Themes include the intricacy of Internet laws, cyber security and career-related queries. Workshops on parental control over the Internet, digital wellness and cybercrime awareness are conducted regularly. So far, about 1,00,000 people have been reached through online and offline platforms in various states of India.

‘Cyber Gyan - India’ campaign is an individual initiative undertaken by Mohit Sahu on behalf of the non-profit Chhattisgarh Infosec Society. It promotes cyber security awareness, offers self-protection techniques, and discusses methods to secure personal information. An estimated 46 per cent people have faced cyber crime in some form. CIS conducts seminars in schools and colleges, and leverages social media for outreach.

The Indian Institute of Management (IIM), Rohtak, uses social media to promote a range of its student activities such as ‘Social: Run for the Girl Child’ and ‘Bapu ka Chashma; Every Child in School.’ It spreads the word about various summits, sharing insights, management conclaves, internship experiences, educational blogs and articles. The blog LIFE@IIM-R shares details of campus activities.

Uttar Pradesh Tourism Department uses social media to promote historical monuments. Instead of just broadcasting on the official website, it engages tourists and locals via a range of social media. It has 1,800 Twitter followers along with a Facebook reach of around 45,000 people. Features like apps are used to conduct heritage walks in key tourist attractions.