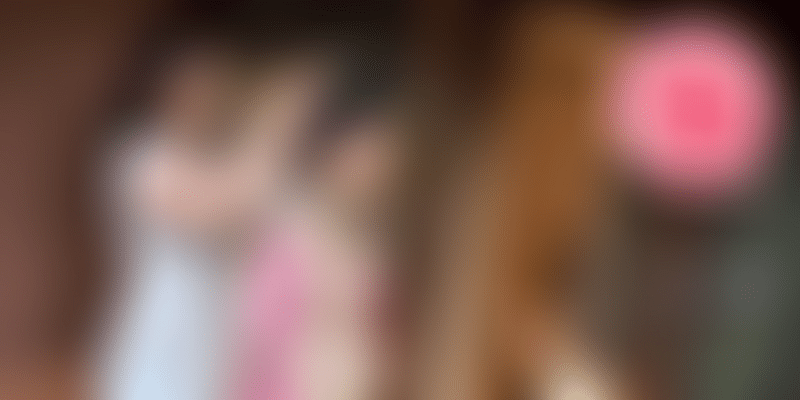 Even over the phone, it’s evident why Roopali Agarwal is such a hit with her clients. Warm, friendly and with a contagious laugh, she is one of the capital’s rising wedding make-up artists.

Her first makeup gig that she was paid for was on 30 April 2014, the same day she started her Facebook page. It’s been nearly three years and Roopali has worked with more than 1,000 clients during that time.

“Last year, Abhiraj Bahl, one of the co-founders at UrbanClap, called me and told me he had seen my Facebook page and liked my work. After speaking with him, I decided to join their platform and have got so many clients through them. They really do listen to what I have to say, and that is the best thing,” she says.

But Roopali’s journey as a successful makeup artist was not always smooth.

Born and raised in Mumbai, Roopali worked as an architect for nearly a decade.

“I was practicing architecture even after my marriage, but my daughters were born just one-and-a-half years apart. I had to take a break from work. Also, my husband’s job entailed us moving frequently. As an architect, it’s important to stay in one place. So, I decided to explore my interest in skincare, and work from home,” says Roopali.

She started attending various courses and workshops on skincare. Soon, people started noticing the change in her skin and asked her what she was doing. Roopali says, “I love talking about skincare and would happily guide people on what to do. In the process, I met someone from Mary Kay cosmetics, who invited me to come check out the range.”

In the four years she worked with Mary Kay as a distributor, Roopali rose in the ranks to become a director and was one of the top seven sellers in India, selling more than Rs 5 lakh worth of products every month. “I think it’s very important that women are independent. And this job not only empowered me, it let me help other women also,” she says, an uncharacteristic seriousness creeping into her voice.

But three years ago, Roopali’s journey was set to take another turn. Mary Kay decided to shut shop in India following FDI regulations.

“It was a big blow for all of us. I am a workaholic. If I can’t work, I can’t eat. I was on the verge of a nervous breakdown. I actually sat on the road in Punjabi Bagh in a daze. My husband had to come and pick me up. Everyone was worried about me because they knew how passionate I was about my work.”

Roopali says she cried all the way home. Later that day, her husband told her that she would not be sitting at home, and that he had signed her up for a makeup course starting the following day. But while attending the course with a reputed professional makeup company, Roopali realised that the kind of makeup she wanted to do was different.

“I was talking to a friend, who is a professional makeup artist, and she agreed to teach me some tricks. I had to travel to her house as she had a newborn baby. I would travel one-and-a-half hours to reach her home, often at 7 am, because she could only teach me when the baby was asleep. This went on for four months,” she says.

Roopali started texting her clients from Mary Kay telling them about her new career move. Because of the trust that she had built with them, they invited her to do their makeup for parties and weddings. But she soon decided that she would only work for weddings. Her husband, Parag Agarwal, heads global marketing for Hero, and was rarely in the country. Roopali wanted to be there for her children. “Weddings were very convenient. I could work during the season, and once the season was over, I could give my time to my family.”

Roopali says that her association with UrbanClap has made being financially independent and spending time with her family possible. “A customer goes to UrbanClap looking for a makeup artist and specifies certain criteria like budget, event, location, and date, and UrbanClap sends them five responses, within a few hours. As service professionals, I get more business because I only get relevant leads and I can then choose to work based on my convenience. UrbanClap allows me that flexibility.”

Pallavi Swaroop is a client Roopali met via UrbanClap. “When my wedding was fixed, I was responsible for my makeup artist and photographer. UrbanClap put me in touch with Roopali. Her specialisation is contouring and she listened to everything I wanted. She also helped me with skincare tips. Even the hair person she works with was very good. She was very punctual and got me ready on time. It was a great experience and I would recommend her and UrbanClap to anyone,” says Pallavi.

“I have used UrbanClap for other services also. My cousins wanted makeup done for my wedding. UrbanClap came through again and gave me a lot of options. My wedding photographer was also courtesy them. I even had my new house cleaned through them when I moved after my wedding,” she says

One of the most important benefits service professionals gain from UrbanClap platform is that they only get leads that are relevant to them. They can then choose which leads they would like to respond to. This makes the whole process of doing business much simpler.

Roopali says that the ultimate rush for her, apart from her financial independence, is when the brides she works with look in the mirror and say that they look exactly as they imagined, and are excited to take selfies with her.

Roopali, who recently turned 40, says it’s never too late to do what you want and change your career. And she says none of this would have happened without her husband’s support. “I don’t have a bigger supporter than him. He has given me more freedom than anyone in the world.”

Roopali’s advice: “Don’t waste money on products you don’t need. Try something on, walk around and come back the next day if you still want to buy it. Also, look after your skin. You can wear a Rs 100 sari and still look like a million bucks if your skin is glowing.”

This article is sponsored by UrbanClap