Day 75: They still look at my blackened skin with hatred, disgust and suspicion 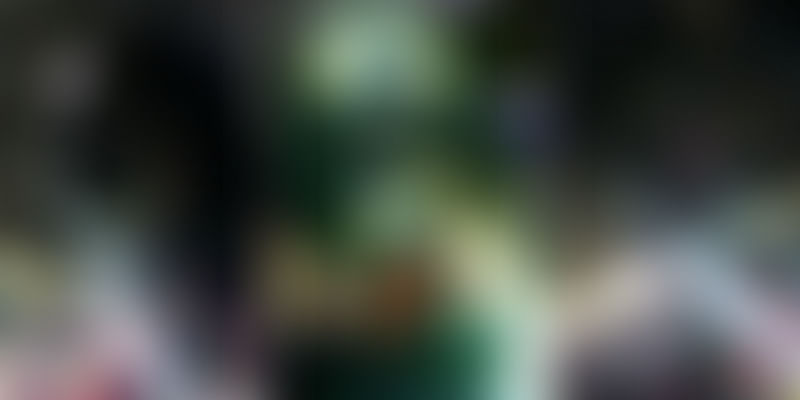 As she prepares to face the big bad world, she can’t help feeling a little nauseous. She walks out on the street, not fully confident at first, but soldiers on and takes her first steps. She can feel the stares boring in her back and the whispers loud and clear, crowding in her ears. She knows all that muttering is an assortment of snide references about her appearance, and abhorrence at her disposition. But this conversation around skin colour is exactly what she was aiming to start, and made it worth the anxiety. After all, the excruciating scrutiny and judgement she will undergo for the next 100 days is something that 70 per cent of our population faces all their lives. But unlike her, they cannot wash off their naturally dark tone in order to be accepted and respected; they must live with the indignation forever. The least Jaya P.S. feels she can do is spark a conversation around why we are so bigoted.

Her war-paint and war-cry

Jaya P. S. smeared herself from head to toe in black war-paint on Republic Day to challenge our deep-rooted suspicion and hatred of dark skin, and bias against Dalits. Hailing from Keezhillam in the Ernakulam District, she now lives in Tripunithura with her sister, friend, and aunt. A Masters in Fine Arts graduate, she is a painter, teacher, and performing artist who sees this social experiment as just another ‘performance.’ After all, art can be an impactful vehicle of change. “It’s a protest, and at the same time, it’s a work of art. As an artist, I know art can be a medium to express our ideas and beliefs. In my performance, my body is an important medium. I have to experience directly from the audience their expressions, and I want to know how they experience my performance.”

This is, in part, the influence of the arts collective she is a part of, called Kalakakshi. An ‘artivist’ platform, they seek to engage with the public through art on issues that are here and current, by collaborating with social activists, fellow artists, writers, and with the general public through community projects, interactive sessions, and other activities. Following the suicide of Rohith Vemula, the Dalit student at the University of Hyderabad, Rohith Vemula, which sparked off countrywide protests, Kalakakshi organised an event in Kochi, “Remembrance of Rohith Vemula” on January 26 this year. The words in his suicide note still haunt our conscience. “The value of a man was reduced to his immediate identity and nearest possibility. To a vote. To a number. To a thing. Never was a man treated as a mind. As a glorious thing made up of stardust. In every field, in studies, in streets, in politics, and in dying and living,” reads its opening paragraph.

That event made her think of what she could do as an artist to keep this issue alive until it sees fruition. “I mainly address Dalit issues. In our society, people think dark colour is not good. People doubt dark skin. We have had such kind of hate-crimes in our history. But it is hardly a thing of the past. The caste system still continues. After all, we know what happened to Rohith Vemula. In this situation, as a practicing artist, I was thinking about how I can raise some questions and discourse in society through my art work.”

A ‘performance’ for change

Jaya P.S. first wanted to get to the bottom of this bigotry. She needed something though which she got live reactions from people as well as engage them in conversation. She could think of nothing more simple, yet effective, than turning her own body into a canvas to see for herself what it must feel like. Covering all her visible skin in black paint, she decided to conduct this social experiment for 100 days. Today is Day 75.

“When I stepped out of my home the first time, I wasn’t confident enough to face the public. But I had to do it. While travelling by bus, auto, on the footpath, so many people asked me what was wrong with me, they expressed their doubts about this performance. Some people appreciated me, and some other are criticised me, but I faced all their questions. When I reached the private institution where I work as a drawing teacher as well, my students and their parents wondered what I was doing. I took the opportunity and shared my concept about caste system how that works here in our society.

The artist and her expression

Jaya didn’t stop there. She gets more and more creative with her “performance” everyday. Day 42 was International Women’s Day, when she wrapped her blackened body in LED lights and took a “walk of shame” on a crowded street in Kochi, in order to challenge our notions of beauty. As a Bharatanatyam dancer, Jaya is familiar with drill, of dancers having to meeting impossible standards of beauty before recitals – caking themselves in make-up with lighter shades in order to look ‘perfect.’ “As a classical dance practitioner, I planned to do a classical dance performance with my black body because I want to deconstruct the concept of beauty in Indian classical art forms.” The lights, hence, were symbolic of this absurdity of us sheepishly covering our naturally beautiful dark skin in bright colours, thinking we look better that way.

Next, she plans to organise a public talk on the subject, hold an exhibition with photographs and first-person videos shot during the “performance”, and even create a calendar, which includes all the important landmarks in the Dalit movement, using photographs from her campaign. Furthermore, she wishes to write a book on her experience across the 100 days, including some literature on important Dalit activists and other campaigns.

I may not be able to immediately change this society or the government with my performance, but I am sure I can raise some questions. I simply want to show them that we must re-evaluate our mindset or our take on the caste system in our society. And given the positive response I have received on social media and otherwise, I believe that the foundation stone is laid.