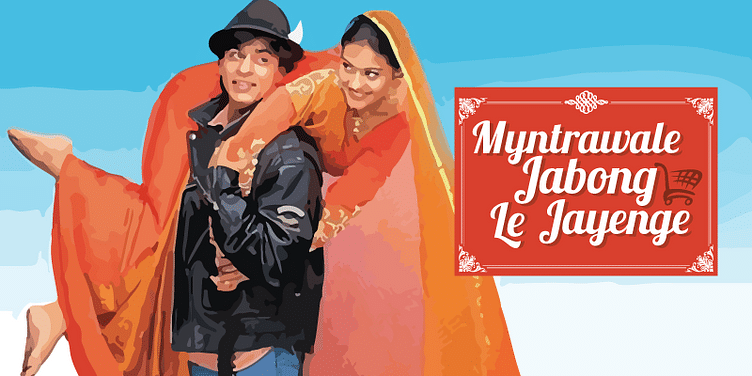 Life has a funny way of showing that fact is stranger than fiction. When Jabong entered with a bang, in the form of a high-velocity television ad campaign, all those years ago in 2012, everyone including this reporter sat up and took notice. But how things have changed. Four short years later, Jabong has quietly fallen into the arms of competitor-turned-suitor Myntra in a marriage of convenience worth $70 million.

Goes to show, doesn’t it, that anything can happen in business.

For many e-commerce newbies this might just be a simple acquisition. But for those of us who have watched this industry take baby steps over five years ago, the Myntra-Jabong deal is a clear closing of a chapter.

The rise and rise of Jabong

However, we will need to step back a bit to understand why this deal is, well, such a big deal. Jabong’s launch was during the heady early days of e-commerce growth in India. Everyone, including the media, was just beginning to take notice of this brand-new industry. For context, consider this - it was in 2012 that Flipkart raised $150 million at a valuation of $850 million. Both the amount raised and the valuation were then unprecedented. This happened less than a year after Snapdeal pivoted from being a group buying site into an e-commerce marketplace. Incidentally, Snapdeal was among the many suitors Jabong had and, according to our sources, it had offered $50 million. We couldn’t independently verify this.

Yebhi, FashionandYou and a few smaller companies were the only other players in the fashion space. Amazon had not made its entry into India, and Flipkart would launch fashion as a category only in late-2012. Jabong had entered with a swagger – spending foreign dollars on big-ticket ads and discounts. Myntra had launched its first ad campaign in 2011 but that was four years after it came into existence.

No wonder the team behind Jabong was very confident about their potential to beat competition. A person who was part of Jabong’s senior management in 2012 told YourStory:

When Jabong entered the scene, Myntra was pivoting from their earlier model [personalisation for gifts] to the current marketplace model. BigShoeBazaar had become Yebhi [backed by Nexus and Catamaran]. But within two years, Jabong was dominating the market. We did not take Myntra very seriously.” The person spoke on condition of anonymity.

Jabong also entered into a flurry of exclusive partnerships with international brands like Dorothy Perkins and fashion designers like Rohit Bal. Even after Flipkart acquired Myntra in May 2014, Jabong seemed to be on a strong wicket. In September, Rocket Internet and Kinnevik, the company’s investors, merged Jabong with four other fashion e-tail companies from their portfolio to form a mega fashion firm. At the time Jabong was valued at around $500 million. A month later it emerged that Amazon was in talks to buy Jabong, but the latter was holding out for a higher valuation.

So, when Myntra went app-only Jabong was expected to go for the kill. But that did not happen.

While Manu Jain and Lakshmi Potluri, part of Jabong’s founding team, left in the early years, Praveen Sinha and Arun Chandra Mohan stewarded the company until as recently as last year. Soon after their departure rumours surfaced about corporate governance issues.

Even before that all was not well. Losses were creeping up and revenue wasn’t keeping pace. Heavy discounts were blamed. Between January and June 2015, Jabong’s losses were to the tune of Rs 227.4 crore. The number stood at around Rs 155 crore between January and June 2014. The net revenue for the first six months of 2015 grew only 26 percent, to Rs 410.7 crore. By end of 2015 it was a well-known fact that Jabong was in trouble. In December, Sanjeev Mohanty, former MD of Benetton Group, was brought in to captain Jabong through the rough weather. The company did make all the right noises. But that wasn’t enough. Rocket, already facing troubles globally in the form of stock crashes and trouble with shareholders, had seen enough of its Indian ventures fail. It had already sold off FabFurnish to Future Group, and putting Jabong on the block seemed to be the only way out. Email responses by a spokesperson for Global Fashion Group (GFG) confirm that this was a way of cutting losses.

The transaction will de-consolidate our highest loss-making operation while delivering capital that can be deployed in high-return opportunities across GFG’s footprint,” says the GFG spokesperson.

This deal comes just days after Rocket contributed 68 million euros to a funding round worth 330 million euros into GFG. This fund infusion valued the group at 1 billion euros, says a Bloomberg report, below half what the company was worth in 2015.

So, why is this deal important?

For Myntra and, in turn, Flipkart, this is a very important deal. The importance becomes very clear when speaking to Mukesh Bansal, Co-founder and former CEO of Myntra.

“This deal is a validation of the conviction we had. I remember three to four years ago I had said in an interview when I was asked about Jabong that in 2016 Jabong will not matter,” says Mukesh, when YourStory spoke to him post the deal announcement. Mukesh, who was leading Commerce for Flipkart until recently, co-founded and led Myntra until Flipkart acquired it in May 2014. He said he was not involved in the Jabong deal discussions.

Snapdeal, Aditya Birla Group's ABOF and Future Group were considered the front-runners for claiming Jabong. However, Flipkart ran away with the prize. A source with direct knowledge of the deal said Global Fashion Group—the umbrella company that runs Rocket Internet's fashion businesses—ensured that Flipkart’s interest in Jabong never leaked out, showing how both parties were keen on closing the deal.

Arvind Singhal, Chairman of retail advisory firm Technopak, says this is a smart move by Flipkart.

Just like its Myntra acquisition, Flipkart has ensured that competition is not able to get its hands on Jabong. This deal might not have an immediate impact on Flipkart’s turnover or valuation or fund raising. But it has ensured its competitors do not get the advantage,” says Arvind.

Mukesh says neither Flipkart nor Myntra needed Jabong to increase leadership position in fashion. “But it helps consolidate Myntra’s and Flipkart’s position,” he notes.

Flipkart has been dealing with valuation markdowns by existing investors, an extremely aggressive competitor in Amazon, issues with sellers and even a general perception that Amazon offers better service. So the Jabong deal becomes a much-needed win for the Bengaluru-based e-commerce major.

For Snapdeal, the loss of this deal is yet another setback in recent months. First came reports that Amazon had overtaken the Gurgaon-based e-commerce marketplace to take second spot; then came reports that its sales are actually slowing down, and then the Gojavas fiasco happened.

Amazon India, which just added $3 billion to its arsenal, will not be too fazed by this deal. However, it has been trying to get its fashion game right and Flipkart getting Jabong does not pose an ideal scenario for the company. Hence it is all the more surprising that Amazon, an early suitor, did not seem to have shown any interest in Jabong this time around.

So what happens to Jabong

For now Myntra has said it will keep Jabong as a separate entity. But, sources say, Jabong could be shut down at a later stage.

The Jabong instance is a clear example of how pumping money into a business is not enough to ensure its success. Sure, the money was needed to build the brand and the recall in customers’ minds, but the follow-through in terms of focusing on sustainable metrics, like unit economics, burn-to-revenue ratio and profitability, seems to not have happened. Or did not happen in time at least.

“E-commerce, like any other business, has to be done on fundamentals. It is a retail business, not a tech business. Revenue model has to be clear from the beginning. Acquiring customers is not the only metrics,” says Arvind of Technopak.

Will investors and entrepreneurs learn the right lessons from this deal?