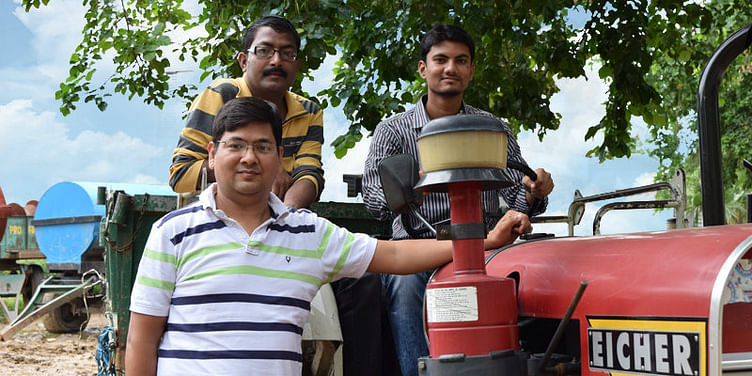 Vikas Goyal, Founder of Agroman, a product and price discovery platform focussed on agriculture implements, would spend his time amid farmers trying to expand his understanding of the agriculture sector. During this time, he realised that Indian farmers were considerably lagging behind in farm mechanisation.

He observed that implements used in farming were expensive and bore no government subsidy. Because of this, small and marginal land holding farmers, who constitute 85 percent of farmers’ population in India, were not taking interest in purchasing such tools and, hence, not able to draw any mechanical help.

According to a FICCI report Transforming Agriculture through Mechanisation, released in December 2015, farm mechanisation in India is 40 percent against the 95 percent in the US and Western Europe, 80 percent in Russia, 75 percent in Brazil and 48 percent in China.

Vikas, from interactions with the farmer community, also noticed that where implements were being used for farming, they were used for a small period of time. Farmers who owned such tools utilised them for less than 2-3 weeks in each season; and the rest of the time they lay idle. Why not bring the idle implements to the use of other farmers who didn’t have any, he wondered.

Based on the idea of sharing economy, Vikas launched Ravgo in May 2016. An agri-equipment rental marketplace for the agriculture sector, it aims to bring access to modern technology for small farmers who cannot afford ownership of expensive machinery.

“Through Ravgo, farmers can access agriculture services, superior farming technologies and latest equipment at affordable costs without the hassle of ownership,” explains Vikas.

He adds that the objective is to enhance productivity through farm mechanisation and thereby increase the income of farmers. The platform leverages Internet technology to provide benefits of mechanical technology to small and marginal farmers.

The agri-equipment rental marketplace follows a commission-based model in which it charges a certain percentage from vendors in lieu of the business it brings to them.

Vikas says that in agri-equipment rental business, an hour of service fetches as high as Rs 1,000. “This rental economy has proved a boon for both vendors (agri-equipment owning farmers) and consumers (farmers). The former gets a regular source of income on his investment (equipment) and the latter saves lakhs of rupees on purchase of new tools and gets the service for as less as a few thousand rupees,” Vikas says.

Ravgo launched operations in Faridkot district of Punjab by enrolling vendors who own agri-equipment. It has on-boarded 50 vendors in one month and claims to have offered its services to more than 200 farmers.

It plans to launch operations across Punjab in the next rabi season.

Why mechanisation is the need of the hour

Small landholdings and poor economic condition of farmers have resulted in minimum use of agriculture equipment. Indian farmers are either not aware of new type of machines or cannot afford to buy such machines. Because of these factors, agricultural productivity has remained low and farmers have lower incomes.

According to Vikas, mechanisation can result in savings of 15-20 percent in seed and fertilizer consumption, savings in time and labour cost and enhancement of farm productivity.

Mechanisation is concentrated on tillage and seedbed preparation and harvesting. More than 50 percent harvesting of wheat and rice is mechanized and harvesting of the rest of the crops with machines is less than five percent. In tillage, old types of equipment such as cultivator and disc plough are still used.

How sharing economy will help farmers

Such kind of an economy has benefits galore. Farmers won’t need to buy tractors and other equipment, which will be available at a fraction of the cost of ownership, combined with any time access to the product and its services. For the vendors, their income will increase as they rent out products.

According to analysts, the size of the tractor hiring market is Rs 15,000 crore per annum. Vikas pegs his own potential market size calculation thus: with area under food cultivation in India at 125 million hectare, and average cost of servicing one hectare for two seasons at Rs 15,000, assuming 30 percent mechanization on rental basis, the market size is estimated at Rs 56,250 crore. “If one adds the need for mechanisation in sugarcane, fruits and vegetables, the market size can go up to Rs 70,000 crore,” he says.

With such a large market and the need to promote agriculture and increase productivity, the government itself is sparing no efforts on the sector. It budgeted a hike of 44 percent in farm spending in the 2016-17 Union Budget, touching Rs 35,984 crore, and plans to direct it towards creation of a national e-market for agricultural produce, irrigation schemes, crop insurance, higher production of pulses and interest subsidy for easing the burden of loan repayment from farmers.

Giving a run for its money to Ravgo will be companies such as Mahindra which early this year launched a startup of its own, Trringo, to make tractors and implements more affordable for farmers by getting it to them on rent. Another platform, EM3 Agri Services also offers a range of agricultural equipment services, on a pay-per-use basis.

A win-win for all

Both farmers and equipment vendors are pleased with the turn of events, giving positive views on equipment sharing specially during periods of high demand. “Now we do not have to approach different vendors for equipment,” says Gurpreet Singh, a farmer in Gudduwala village, near Faridkot.

Other practices Ravgo is trying to implement in the sector include price standardisation, high availability of equipment and high asset utilisation for equipment owners. Through Ravgo, vendors can increase their service area and get higher asset utilisation. “This is a seasonal business and we get only 45-50 days when our equipment is required, so it is very important for us to get maximum service requests during those days,” says Amritpal Singh, who owns a laser land leveller.