Ola shuts down TaxiForSure and lays off over 1,000 employees 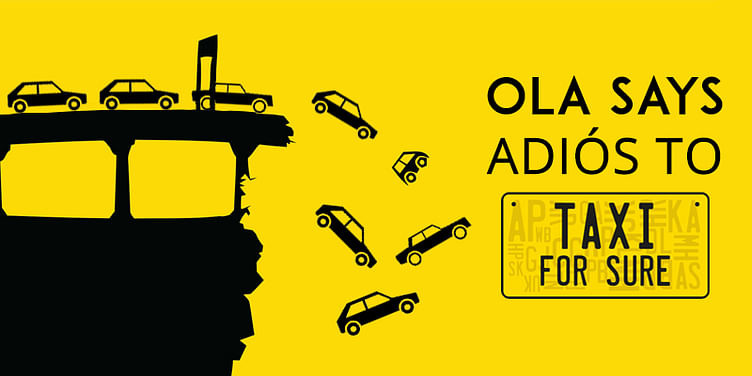 Cab aggregator Ola has shut down TaxiForSure (TFS), the value-cabs company it acquired for $200 million last March. Numerous media reports suggest that 1,000 employees have been laid off as a result of the shut down. While Ola has confirmed to YourStory about the shutdown, it declined to comment on the numbers(layoff).

A report by Mint states that the employees who have been asked to leave worked at driver relations, business development units and call centres. However, a source close to Ola, claimed that only 300 employees had been laid off.

A former Ola employee, on the condition of anonymity, said that the business shutdown last month and over 90 percent of the employees were laid off, with three months’ severance package. Ola had acquired TFS as a move to take on the San Francisco giant Uber. However, in the past couple of months Ola has been strategically consolidating the TFS business.

In an email statement, Ola said:

“The TaxiForSure (TFS) value proposition as an economy brand for customers, has been seamlessly integrated onto the Ola platform with the launch and rapid adoption of Ola Micro. TFS has contributed immensely towards Ola Micro’s success within a short span of time. Ola Micro has expanded to over 90 cities across India and accounts for the largest share of first time cab users coming onto any mobility platform.

This has helped us achieve our objective of building an economy mobility offering for millions of users across the country. With all TFS driver-partners and customers coming on board the Ola app, the integration is now complete.

As part of this integration over the last 18 months, we have achieved immense operational efficiencies that have resulted in an improved experience for customers and driver-partners alike. In the course of the integration, we have absorbed as many TFS employees for open roles in Ola to support our growth. For positions that cease to exist as a result of this transition, we are offering enhanced severance benefits and outplacement services to help affected employees pursue new career opportunities."

However, one of the TaxiForSure employees has confirmed that only the top management were given the option of switching to Ola, while everyone else has been laid off. The TaxiForSure cabs that still appear on the Ola App have been showing as ‘no cabs’ for over a month.

A report by The Economic Times states that since the TFS acquisition, Ola had been unclear of the latter’s brand positioning.

A top executive of the company told The Economic Times, according to the report, that the TFS fleet was transferred to Ola supply and the incentives as well were more lucrative for Ola as opposed to TFS. The report also suggested that the layoffs brings in a total cost reduction of Rs 30 crore a month.

Speaking of how the transition was, the employee added that while the tech and HR transitions were smooth, the work-flow process in TFS was smoother, faster and easier than a more bureaucratic and slower moving Ola. He claims it was one of the main reasons for his moving out of the cab-hailing company.

This closure and lay off comes in quick transition after Uber made its moves in China. Reports also suggest that over the past year, Uber has been a tough competitor of Ola and has been significantly reducing the gap in the Indian market. While Ola launched Micro to hit back on Uber, its recent merger in China with Ola’s investor Didi has possibly changed Ola’s dynamics.

In December 2015, Ola, GrabTaxi, Lyft and Didi Kuaidi had formed a global alliance to take on Uber. But this deal has all the signs of a global truce, with Didi and Uber joining hands in China.

Didi’s founder Cheng Wei would also be joining the Uber board and Travis Kalanick, CEO of Uber, would join Didi. Uber now has a 17.7 percent stake in Didi, which has invested at least $25 million in Ola. Indirectly, Uber now has a share in Ola. Taking this into consideration, speculations are rife about Ola merging with Uber India soon.

The Didi-Uber merger brought in several speculations of how Ola would deal with this shift. Apart from making its bed with the Chinese cab-hailing app, Uber has continued to make aggressive moves in the India market.

Uber recently launched a dial in service that allows users to book a cab directly from the smartphone without an app. Users will have to log on to dial.uber.com, book a cab, and pay by cash. While, Ola continues to remain app only.

The market seems rickety for Ola, but the company has been aggressively focussing on its rentals and taxi leasing business. Last fiscal year, Ola had posted net losses of Rs 796 crore on a revenue of Rs 421 crore.

So is this layoff a means for Ola to consolidate and focus on a rather aggressive and stronger growing Uber? Or is this move helping Ola simply cut its losses?