Despite Facebook limiting her reach, Premi Mathew stands undeterred in her fight for cancer awareness and hair donation 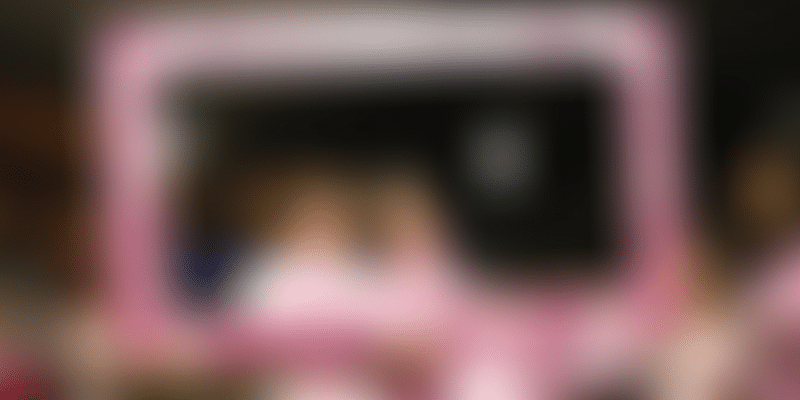 If your life could be saved by just a simple self-examination would you still avoid it?

It is a question Premi Mathew asks people often for she learnt the answer herself the hard way. It took her family’s close brush with cancer to open her eyes to a life-threatening disease and its effects and how easy it was to detect breast cancer. It prompted her to start two initiatives – Protect Your Mom and Hair for Hope India – to spread awareness about breast cancer and start hair donations for wigs for patients undergoing chemotherapy.

Your life in your hands

During a breast self-examination if a cyst and stone-like lump is found, then one has to seek medical consultation immediately. “The best way to detect breast cancer is by self-examination but since the latter does not monetarily benefit the medical fraternity, no one propagates it,” says 53-year-old Premi.

Premi’s own experience with cancer prompted her to start ‘Protect Your Mom (PYM)’ campaign in 2001. She reached out to children through this campaign to create awareness about breast cancer.

She says, “Women are usually too busy to worry about their health. But if their children pester them, they are likely to do it. Kids thus grow up to be more informed adults and might reach their moms more effectively than doctors and commercial sources at zero cost saving thousands of lives.”

Premi resides in Dubai where she moved some 20 years ago. She was born in Kerala and started her career with Kitco. She holds an MBA degree and has taught marketing to students in India and Dubai for 15 years. It is her professional knowledge that she used when she started PYM. She says,

Most brands know that children are the best way to approach the customers’ pockets. If the children want and press for an item, the parents usually give in. I used the same principle with regard to PYM. I reached out to children to help protect their mothers.

PYM creates awareness through specially designed dances, songs, skits, etc., and also features stories of actual survivors to inspire patients. Simple as it sounds, Premi has had a tough time connecting with artists to create skits and videos without any funds. Getting things up and running from Dubai, she has faced these challenges single handedly.

Three years ago when Premi met her cousin’s son from US, a new idea took seed. Premi shares, “When I first saw little Dylan with his long, flowing locks, I wondered for a moment if the Hippie movement was back in America. Naturally, I was too polite to ask, but my cousin sensed my curious looks and explained that her eight-year-old son was planning to donate his hair to make wigs. She explained how the little boy braved bullies and teasing and a punishing hair care regimen (probably the worst part when you’re an eight-year-old boy) to grow it for four years.”

In 2013, Premi set up ‘Hair for Hope India’ to increase hair donation in India and UAE. She was aware of the effects of cancer especially hair loss during chemotherapy and its impacts. She says,

Though hair loss is painless and usually temporary, it is often one of the most distressing side effects of chemotherapy and lowers the self-esteem of sufferers, making them withdraw into a shell! It is a challenge to face the world without hair – the stares, the looks of pity, and sometimes even of disgust.

The ones who survive and fight back have a tough journey. And Premi’s Hair for Hope India makes the journey of these cancer survivors easier. It is her way of avenging cancer. She says that the tears of joy in the eyes of chemo patients and their gratitude are worth it.” The reaction and the support Hair for Hope India has received keeps her going.

People can donate hair from anywhere in India as per the instructions on the site and can mail it to their address in Kerala, where Sargakshetra Cultural Centre, a registered charitable trust, coordinates the production with various wig makers in Kerala.

Today, hair donation is a major movement in both UAE and India. And the Hair for Hope India has inspired over 4,000 donors in India and UAE.

Premi runs bot the initiatives ‑ Hair for Hope India and PYM ‑ single handedly. She does the planning, organising, coordination, PR for the events, manages the Facebook page, and deals with all the correspondence.

Without any funds, she has managed to create noise and put the spotlight on cancer and its effects pre- and post-diagnosis.

She hit a major spot when Facebook started charging for promoted posts. She says, “It became difficult to raise awareness on Facebook, and hair donation is a tough concept to sell. The reach of our posts reduced dramatically.”

However, Premi never gave up and found a way to push through.

In a land where the length of hair is a measure of a woman’s beauty, ladies were actually queuing up to donate smiles. Since we didn’t have official advertisements, or, indeed, funding for them, every donor became our model, setting a personal example. I asked every donor to share their hair donation picture on their profile, and respond to all comments on them. I’d found that comments greatly increased visibility, through repeated exposure on their contacts’ news feeds.

The stories and the responses have kept her going for the past five years.

For Premi, it was inspiring to see women fight societal norms to support the cause and the children face social scorn for long hair in their small towns. She shares the story of Jobins, a boy who was deemed crazy in his small town for growing his hair. He started a WhatsApp group so donors could lean on each other for support, and know they weren’t doing it alone.

Premi is determined that she will continue to push until all the children and their mothers understand the importance of self-examination for breast cancer and teach people of all age groups, especially children, to donate hair to bring a smile to a cancer patient undergoing chemo.

“We can’t teach morality, only inspire it. That is what I am doing,” wise words from a woman on a mission.