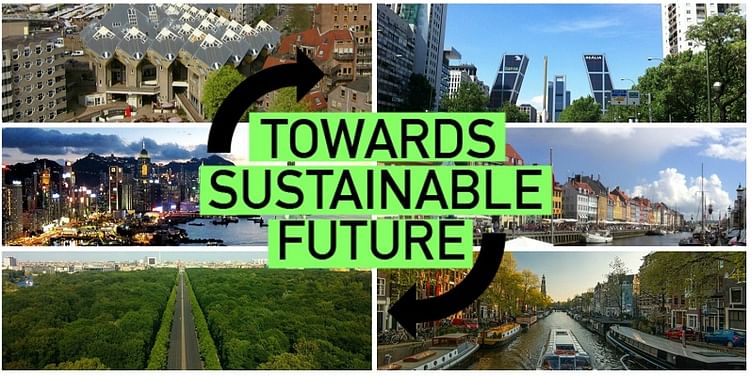 Cities around the globe have rapidly expanded in the 21st century. There has been a meteoric rise in the urban population, which accounts for 54 percent of the total world population today. This number is projected to be 66 percent by 2050, which means that world cities will be home to more than six billion people in the coming decades. Urban planners are facing immense pressure to accommodate the growing population without exhausting the limited natural reserves we have left. Sustainable development is paramount to striking a balance between the two and ensuring resource security to future generations. The unanimous commitment of all 193 member states of the United Nations (UN) to a new set of Sustainable Development Goals in 2015 is a testament to its importance, now more than ever.

A few cities have already made great strides and stand out as leaders in the quest for sustainable progress, as reported by the Sustainable Cities Index 2015. The study evaluated 50 major cities worldwide based on three parameters – People, Planet and Profit.

The People index assessed factors like the standard of living of citizens, education and literacy, health and work-life balance. Planet included the extent of public transportation, drinking water and sanitation, carbon emissions, air pollution, renewable sources of energy and greenery. Lastly, Profit measured the ease of doing business, the cost of real estate, per capita GDP and the importance of the city on the global economic map.

The result consisted of the following ten most sustainable cities in the world.

One of the largest cities in Germany, 52 percent of Frankfurt is occupied by open green spaces like parks and woodlands, and water bodies. It has concrete plans laid out for climate protection, energy efficiency and water and nature conservation. For example, it has a low emission zone of 110 square kilometers in which vehicles causing high air pollution are not allowed. Frankfurt hopes to reduce carbon emissions by 50 percent by 2030 and be 100 percent dependent on renewable sources for energy by 2050. The city seems undeterred, and its ambitious goals under the ‘Frankfurt Green City’ banner will surely boost its impressive pursuit for sustainability.

London is a leading global destination, known for its rich cultural heritage, architecture and financial dominance. Its healthy population and superior higher education institutes further its capacity for sustainable development. However, the city is facing challenges from sliding air quality, congestion, expensive real estate and ageing infrastructure. The local government has measures in place like the City of London Air Quality Strategy (2015-2020), waste recycling, noise reduction and other environment protection programmes. The city is also promoting sustainable designs for buildings while mayor Sadiq Khan said he is “committed to tackling the housing crisis.”

The European Green Capital of 2014, Copenhagen is the world’s first bike city. 37 percent of the population use bicycles for their daily commute. It is widely considered to be one of the most liveable cities in the world. Their ‘Five-finger plan’ for urban development promotes structured growth of establishments while ensuring an abundance of green spaces in between. Copenhagen aims to be carbon neutral by 2025 mainly through increased use of renewable resources for energy efficiency. The city also plans to build streets that can accumulate water from storms and parks that can absorb heat and double as reservoirs by 2050.

The compact capital of the Netherlands is a city of diverse green spaces, canals and artistic legacy. Like Copenhagen, bicycles are a popular mode of transport with 38 percent of all trips taken on a bike. The city’s policy focus is on making more buildings, new and existing, conform to sustainable design as well as decreasing carbon emissions. Hence, the Amsterdam Climate and Energy Fund was started in 2013 with the aim to increase energy efficiency and invest in renewable sources. With a healthy population, strong schooling environment and a climate council to help resist the effects of climate change, Amsterdam is on an effective route for sustainability.

Rotterdam is home to the largest port in Europe. Besides having the highest water sustainability in the world, it boasts a number of green rooftops, parks and nature trails. The city is popular for its use of innovative sustainable designs. For example, the Rotterdam Capture and Storage Demonstration Project (ROAD) aims to catch and store 1.1 million tonnes of carbon emissions from industries each year. The stored carbon dioxide can later be used by the industries through pipelines. Rotterdam’s objective is to be the most sustainable port city in the world, and with futuristic ideas like floating homes on water, it’s not far behind.

This historic city is a mix of green expanses, lakes, modern architecture and iconic monuments. Berlin’s citizens are actively involved in converting wastelands and open spaces into gardens to increase its environmental sustainability. There are several other green initiatives such as organic restaurants, eco fashion and urban biking. With a vision to become a smart city, Berlin has taken a holistic approach towards sustainable urban development. Besides reducing carbon emissions and achieving climate neutrality, it wants to ensure a healthy population, greater economic opportunities and stronger infrastructure.

Seoul has greatly contributed to South Korea’s economic growth since its separation from North Korea. Today, it is a successful model for sustainable development in the world. Its data-driven approach towards sustainability is mainly to encourage an environmentally conscious population. For example, the Personal Travel Assistant (PTA) provides users with information on the cheapest and best modes of transport to ensure minimal carbon emissions. Seoul also runs electric buses and economical bike rental systems. Additionally, the city has made efforts to increase urban green spaces and water resources to create a healthy living environment. The Cheonggyecheon stream, which is popular today as a nature spot, initially had an elevated highway running over it. However, the stream was restored in 2005 by removing the road and enhancing the ‘eco’ factor of the city.

Hong Kong is a city that complements its modern establishments with natural diversity and a strong cultural legacy. Its urban development is the result of both public and private investments and partnerships. For example, Fair Winds Charter introduced by Civic Exchange, a public policy think tank encourages ships to use fuels with low sulphur to control air pollution. The government gives incentives to companies complying with the charter’s recommendations. It is an ideal collaboration between an NGO, the government and a private business. Similarly, the Council for Sustainable Development, which manages a 100 million dollar fund, is taking steps for climate protection, better infrastructure and greater public participation.

In January this year, the vibrant Spanish capital announced its plans to make the city greener with more parks, green rooftops and urban gardening. It has emphasised on improving air quality as well as shifting from private to public transport in the recent years. With goals like increased urban mobility, effective water management and energy efficient buildings, Madrid plans to become a socially, economically and environmentally attractive city to live and invest in.

The city of Singapore is one of the fastest growing economies in the world. Today, other Asian countries are looking to follow Singapore’s model of sustainable urban planning. It is particularly praised for its excellent water management through methods like wastewater recycling, rainwater storage and desalinisation of saltwater. Singapore also has a quality public transportation system as well as regulations to discourage the use of private cars. The local government plans to make 80 percent of all buildings energy efficient green structures by 2030. The first Zero Energy Building (ZEB), which generates its own energy using renewable sources, was built for that very purpose.

Urban development will not endure without a parallel increase in economic, environmental and social security. Hence, other cities should follow the lead of these top ten and introduce time-bound initiatives for sustainable progress.