How Happy Cook is getting busy youth into the kitchen 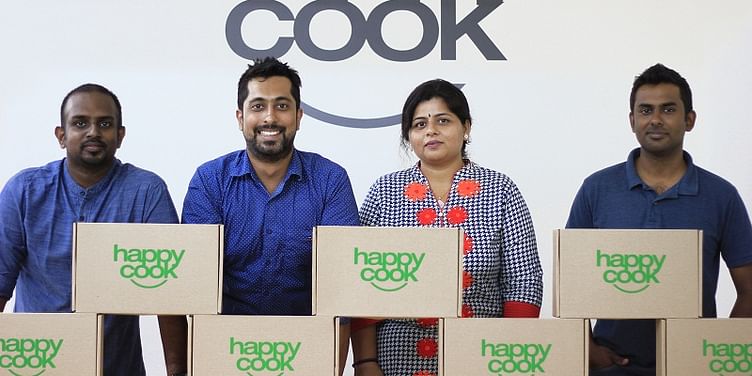 There are over 30 million graduates who have passed out over the last six years, of which 60 percent leave their hometowns to work in urban centres. While most of these kids eat outside, there are some who like to cook, but don't really have the time for it, owing to their busy schedules. Happy Cook was born out of this hypothesis. 27-year-old Athul Uday, who worked in marketing at companies like Godrej and Amagi, was a chef at heart. But, he, like many of his peers, hardly found the time to pursue his passions.

Athul noticed that many of his colleagues wanted to cook too, but subjected themselves to unhealthy food. "That's when my co-founder friends and I realised that this was a business opportunity," says Athul. About 60 percent of the cooking time is based on preparation and sourcing of the ingredients. "So I created a meal box with all the ingredients. It would take 30 minutes to make and have their favourite meals," says Athul. He discussed the idea with Arjun Venugopal (27), Midhun Menon (32) and Vedika Thakur (39), who were thrilled with the whole idea of getting people to cook. So, they quickly registered Happy Cook in 2015 and invested around Rs 50 lakh in the business.

Happy Cook finds itself in a crowded space,as there are already several startups that follow the same business model. Startups like Chefcraft, Halfteaspoon, Built2cook, Fizzy food labs, iChef and Cookfresh all have similar business models.

The difficult part is that this is an operations-intensive business and requires heaps of money to keep the business running. So what is so unique about this industry, especially when none of them are making money. The same data points come to mind.

There is a younger population in urban centres that would eventually want to cook for itself. However, getting them to cook requires bringing about a behavioural shift, because the social fabric in urban India is still based on families where a large household (with mothers, in-laws and daughters-in-law chipping in) takes responsibilities. In fact, these startups are only going to be focused on individuals who love cooking and are displaced from their homes. So Happy Cook has to contend with culture and competition. It's has to scale quickly and find investors. Since it is only in operations for three months, the company did not want to reveal its revenues.

The team quit their jobs in November and went about creating a supply chain. They hired space for a kitchen and contacted vendors who could supply ingredients. At the kitchen there are 10 people who pack ingredients and marinate meat. Each ingredient is numbered so as to ease the cooking process. Then they worked on the branding, which was to showcase cooking as an easy pastime. Since all the co-founders worked in marketing roles they went about designing the Happy Cook meal boxes. The designs of the boxes make the order look like a fast-food or pizza box. But when one opens the boxes they have fresh ingredients and there is a narrative about the food the customer ordered.

You can order anything from fresh crab Malabar style or Andhra pepper chicken. The meats are packed in ice to maintain their freshness till the customer's doorstep. Happy Cook works with several chefs in the industry to design the meals. Once the Chef lays out the design of the meal, the Happy Cook team sources all the ingredients, packs them (in the Bengaluru kitchen) and delivers them based on the customers' convenience, for lunch and dinner.

All items have a day's shelf-life and the ingredients change every week. Today, the company does 50 orders a day in two suburbs in Bengaluru and is planning to scale up across the city. Once it raises money it plans to expand nationally. "We are not a company that competes with online restaurants," says Athul. He says that his platform encourages people to cook fresh meals and stay healthy. The team ensures that hygiene in handling such products is of the highest order.

The other big competitors

Happy Cook's competition comes in the form of Fresh Menu and Hola Chef. These two companies have scaled up their set menus and do around 1,200 deliveries each a day. Fresh Menu has raised more than $20 million and is one of the largest fund raises in the food technology space.

"This industry is focused on the growing urban population. It makes a lot of sense to use technology as an ordering and delivering mechanism, provided the supply chain works efficiently," says K Ganesh, founder of Growth Story and investor in Fresh Menu.

The costs in this business are sourcing of ingredients, salaries, logistics and building a brand while maintaining good quality of service. The team pays the chefs who design the dishes based on their popularity.

"These businesses have to standardise their processes to scale up," says V Balakrishnan, Co-founder of Exfinity Ventures.

For Happy Cook, the journey to deliver their dreams of making people cook has begun a couple of months ago. Though they have a lot of competition, cooking is something people enjoy, as youngsters know that home-cooked meals are always the healthier option.