The Kinnar Akhada of Varanasi on Friday conducted 'Pind Daan' for the souls of deceased Kinnars (eunuchs) at the Pishach Mochan Kund for the first time. Pind Daan, according to Hindu beliefs, is performed to end drought and bring prosperity to a region.

This is the first time in history that eunuchs and transgenders have perform the ritual, although there is a reference to Shikhandi performing Pind Daan of her ancestors in the Mahabharata. Many also believe that the ritual was performed by Kinnars during the Mughal era, although no hard evidence for any of these claims exist.

"It was an attempt to revive the lost ritual of performing prayers for deceased eunuchs. Eunuchs and transgenders from across India participated in the Pind Daan in the holy month of Pitrapaksh," senior Akhada member and activist Laxmi Narayan Tripathi told PTI.

"This Pind Daan is different from what Hindus follow. In Hinduism, Pind Daan is performed for biological parents and ancestors. However, eunuchs and transgenders perform it for those who were rejected by their parents and adopted by the community," Tripathi added.

The 'daan' was performed in the presence of 21 brahmins. They were later served food and made offerings at Durgakund. "The event held under the aegis of Ganga Mahasabha aims at bringing them into mainstream society", Tripathi said.

Akhada members and participants also offered prayers at Kashi Vishwanath temple and participated the Ganga Aarti at Dashashwamedh ghat. Tripathi also released a poster conveying a message to save the girl child and to stop female foeticide. 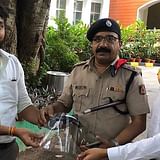