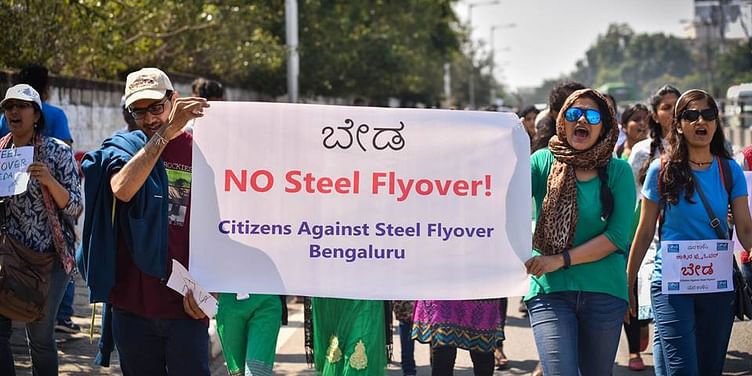 It was an unusually quiet Sunday morning. With the streets seemingly empty, one couldn’t help but wonder at the whereabouts of the Bengaluru crowds. A walk down the lane between the Chalukya and Mekhri circles would have answered all your queries, with the streets packed with people crying slogans in unison. #SteelFlyoverBeda was doing the rounds on Twitter.

A few days ago, the Karnataka Government abruptly proposed to build a 6.7 km stretch of steel flyover that would cut 7-10 minutes out of the drive to the international airport. The plan has seen opposition from a significant chunk of Bengaluru’s citizenry, with a raging plea going up against the gigantic structure, which only seems like fertile ground for a scam of over 1,700 crores. The stretch between the Chalukya and Mekhri circles saw over 8,000 active participants (yes, you heard it right) sloganeering to save the city.

Protesting against the proposed construction of the flyover, which was reportedly sanctioned without public consultation, about 8,000 people formed a human chain here, as per PTI reports.

The Citizens Against Steel Flyover forum formed the human chain to intensify their struggle against the proposed flyover, which is to link Basaveshwara Circle to Hebbal.

We want the project to be shelved as it was sanctioned without public consultation; that is a very arrogant attitude, as our questions are unanswered

The state government plans to construct the Rs 1,761 crore flyover to improve connectivity to Bengaluru International Airport. Belawadi also charged that the project promoters had not taken into account the environmental implication of cutting down hundreds of trees.

Construction major L&T has bagged the contract to build the flyover, which will see as many as 812 trees chopped down, as per details made available by the Bangalore Development Authority, he said.

He alleged that the government had bypassed the Bangalore Metropolitan Planning Committee in sanctioning the project. He also said that the Bangalore Vision Group had not spoken in favour of it as they were doubtful about its feasibility.

The project cost is too high, he said.

The film personality also alleged that the government was misusing tax payers' money in building the flyover when citizens already have several modes of transport to the airport, including a railway station at Devanahalli.

The cabinet had cleared the project on September 28. Chief Minister Siddaramaiah and Bengaluru Development and Town Planning Minister K J George had defended the project, saying it was needed to decongest the city. A spokesperson for the Congress, in an interview with a TV channel, commented on how a population of over 11.5 million was easily claimed to be represented by the 8,000 participants at the protest.

Suresh Kumar said his party completely supports the movement against the "needless flyover."

The project's cost escalation clearly shows that it is contractor-oriented and election fund-oriented, he said.

While the streets around Mekhri Circle soon went back to normalcy, the campaign against the steel flyover only bounced back with a bigger plan. The ‘Citizen Against Steel Flyover’ group on 19th October gathered at the Cubbon Park to streamline and plan the agenda for the coming days.

The volunteers have set up over 60 different hotspots to collect votes from citizens across the city through ballot boxes. The volunteers have a firm agenda of visiting every household to educate the citizens about the concern and raise awareness. Speaking on the topic, CM Siddaramaiah asserted that,

The steel flyover project has been totally transparent, as its details were put up on the website of the BDA (Bangalore Development Authority), and 73 percent of the people have favoured the bridge. We will also develop three alternative routes to the airport to decongest the roads choked with heavy vehicular traffic towards Devanahalli

If constructed, the design of the flyover eats into the lung space of Karnataka Golf Course, Balabrooie Guest House, Military Memorial Park and a few private properties along Bellary Road and Palace Road. More than 800 trees will be axed along Bellary Road, deteriorating our environment, if the project sees the light of day. Along with the heritage buildings and tress, the CM’s residence and the Air Force Station will be under the radar too.

Central funds have dried up for this project. The project is also rumored to be tolled. The pillars of the flyover will eat into the existing road space. Seasoned campaigners for sustainable transport refer to the reduced footpath space time and again. The effective width of the road below will further reduce, triggering congestion on all the roads that approach these junctions. The work on the steel flyover will take over two years, and one cannot imagine the chaos it will cause during this period.

According to N Krishnaraju, professor and expert in concrete structures, a steel flyover will initially cost less than a concrete one, but unlike the latter, a steel flyover will require constant maintenance. This increases the overall cost. Steel is not recommended for constructing road bridges globally; vibrations caused by vehicular movement and the rusting of joints will require maintenance on a periodic basis.

Now, the 6.7 km stretch is extended

Despite the city already being up in arms against the proposed project, the government went ahead with a proposal for further extending the flyover by 1.6 kms. Which implies that it would reach beyond Hebbal flyover, all the way to the National Highways Authority of India (NHAI) flyover to the airport. The proposal means that the steel flyover would go above the already existing concrete flyover, which has met with objections from citizen activists as another Rs 350 crore will be added to the project’s cost.

Also read : The flyover that will ‘steel’ Bengaluru’s soul

While a hue and cry is being raised over the destruction of thick green foliage, the high project cost and the damage to the city’s aesthetics, little thought appears to have gone into the crucial security aspect as the proposed flyover will overlook many vital installations.

Whichever direction the controversy takes, it sure has the potential to turn every Bengalurean rebellious.