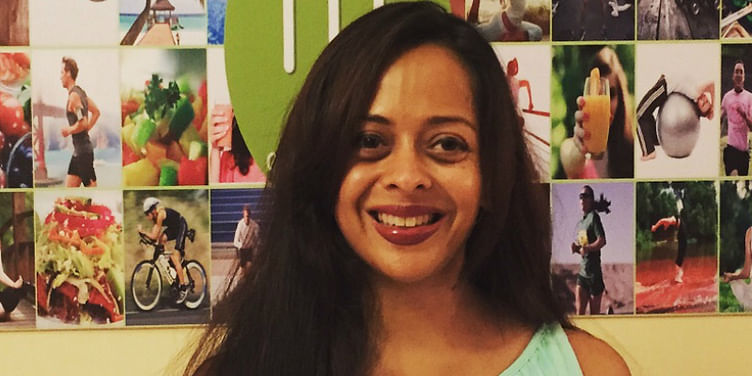 For many out there, losing weight is a life-long battle. Thus, when you hear of someone who has lost 25 kg in 25 weeks, it gives you hope. That is what Pooja Kumar did. She lost 25kg in 25 weeks. That’s not all, she went on to help others like her who have been struggling to lose weight and get fit. She founded JogoApp that helps you lose weight while having fun at the same time.

JogoApp (initially called TheNewU) was inspired by Pooja’s own decade-long struggle with weight and fitness. After giving birth to two babies, she found that she was unable to get rid of the post- pregnancy weight. Pooja thought that weight loss was the most mind boggling, illogical endeavor where one needed ‘magic skills’ to succeed.

After going through a lot of resources like Jane Fonda’s Pregnancy, Birth & Recovery for pre & post natal DVD, among others, Pooja realised that weight loss was a science and went on a path of self-discovery.

She adopted an ‘ERER’ philosophy, which is - for Eat Right, Exercise Right and started supplementing her diet with healthy alternatives wherever possible such as opting for jaggery instead of sugar and brown rice over regular rice.

As a new mother, she looked at everyday opportunities with her baby as a means to exercise -- starting out with walking baby in a pram, rocking the baby to sleep in a carrier. Pooja said,

If the baby wanted to be hugged during the walk, I would use the baby carrier. This helped me work on my strength and cardio. Rocking the baby to sleep in a carrier involved a combination of strength, oblique’s and cardio combined!

After her baby was old enough and didn’t need constant attention, Pooja decided to take up more active forms of exercises like Zumba and running, to speed up the process. She found that Zumba worked best for her as she loved dancing. Also the endorphins helped her be high on energy pre, during, and post the sessions.

Pooja also took up running. She started out with the goal of running 5km at a stretch and set out a four-week plan. She then went after bigger challenges like 10km and 21km marathons. To ensure she was getting the right nutrition, Pooja opted for a 1050-calorie weight loss diet plan to monitor her food intake. While she was getting fitter, Pooja noted that her stomach area which obviously was most affected by the pregnancy, wasn’t progressing as quickly.

She realised that trouble zones needed intensive efforts that are disproportionate in terms of effort and time to see results. So she worked on specific ab exercises and started seeing results. By the end of 25 weeks, she found that she had lost 25 kilos.

Through her weight loss process, Pooja realised that she had gained valuable insights about fitness. So she launched a website, a fitness community and a Youtube channel to share tips based on what worked for her. It was at this stage that it dawned on her that there was a large potential market for a business, along with the opportunity to create a big impact on people’s lives.

Founded in June 2015, JogoApp is a gamified health and fitness mobile app platform. Pooja turned entrepreneur to start up her own venture after working in leadership positions in leading startups like Ujjivan and Eko and well established companies like American Express. For the initial few months after their launch, JogoApp constantly interacted with its beta users to gather feedback and rolled out over four updates in one month.

The venture currently consists of a seven member team, with four focusing on the product and three focusing on sales, marketing and other responsibilities. Pooja believes in losing weight in a structured and natural manner through a combination of superfoods, effective workouts and also ‘cheat days’, which allow one’s body to recover.

Pooja noted that they have got good feedback from users and also got recognition from the startup ecosystem. In March 2016, the startup rebranded from TheNewU to JogoApp, where Jogo in Portugese means ‘play’ or ‘game’. Pooja said,

We were recently shortlisted as one of the top 10 startups of 2016 by Conquest, and have been in the Top 50 for multiple contests over the past four months, includingTiE the Knot, Tech Rocketship, Start Tel-Aviv and Mindbatteries.

Positioned as a gamified one-stop health, fitness and wellness app, JogoApp allows users to earn SweetSweats (reward points) for being active, and then redeem those as discounts against goods. Users can either rely on the in-app Jogo tracker or integrate tracking apps like GoogleFit, Apple Health and other tracking apps/devices. Data gathered on the calories burned gets converted into SweetSweats. Pooja said,

Jogo encourages users to enter a (good)virtuos cycle of exercising and redeeming products that are good for you. We currently have over one lakh products curated across 10 product categories and 1,000 entities offering fitness-related services.

Some other interesting features of the app include-

Challenges and Leaderboard- Users can join challenges and invite onboard their friends, family or peer groups,and watch the groups' progress on a live leaderboard.

Create ‘Fitfies’- Another gamification feature, users can take fitness-selfies(Fitfies) of their fitness and transformation stories to encourage others and also earn bonus SweetSweats.

While it is still at an early stage, JogoApp aims to earn revenues through multiple streams from their product marketplace and the monetisation of their ‘Challenge’ feature for large enterprises. Pooja noted that while regular users can create challenges, the number of participants they can invite to the challenge is currently restricted. Enterprises that tie up with them, on the other hand, can post private challenges for all their employees and encourage them to stay fit. Pooja said,

Corporates can create private challenges and encourage employees to participate by contributing proceeds from the initiative to a noble cause that employees care about. Apart from the intrinsic benefits, this helps with team building.

So Pooja sees corporate wellness as an important space, since majority of corporate India suffers from sedentary lifestyle issues and hence needs maximum intervention. In that context, JoGoApp is offering a gamified & integrated wellness Solution to Corporates and has partnered with a number of them.

JoGoApp is also partnering with other players in the fitness space, like organizers of leading Running Events in India and is offering a Virtual Race/Active Challenge Platform for existing and potential participants to join in from across the globe, and encouraging them to start or continue on their quest for fitness.

JoGoApp has also tied up with insurance companies to drive preventive care while also making the experience more engaging for their users by gaming it. On the consumer side, JogoApp aims to be a product discovery marketplace for individuals to stay up to date about the market.

A recent report notes that a sedentary lifestyle is one of the leading causes of illness in India, affecting about 70,000 youngsters in the country. The report also noted that India is now the diabetes capital of the world, with an estimated 67 million out of the 422 million global diabetes patients residing in India. Preventive healthcare is a big market in India, and there are many startups that are trying to get Indians to lead healthier lives.

Micromax backed Healthifyme is a popular calorie counter and digital fitness coach. Other interesting players in this space include Vishal Gondal’s GOQii, Delhi-based FitSo and Mukesh Bansal and Ankit Nagori’s yet to be launched- Curefit.

So far, Jogo has been relying on both online and offline marketing channels to get users onboard. Pooja noted that almost all of their current userbase has been acquired organically. While a majority of the userbase is from India, Pooja notes that they currently see around five percent of global users active on their platform as well.

While JogoApp had raised an undisclosed round of angel funding from Ravi Srivastava’s Purvi Capital in 2015, the startup aims to raise a larger funding round in the coming months to help them accelerate the pace at which they onboard partners, service providers and curate products.

Pooja noted that the feedback has been fairly positive, with users liking the in-app step tracker and gamification features like leaderboards and challenges. Going forward, Pooja aims to grow the platform and reach 100,000 users in the next six months to create a vibrant social network of fitness enthusiasts.

You can download it here on Android and iOS.