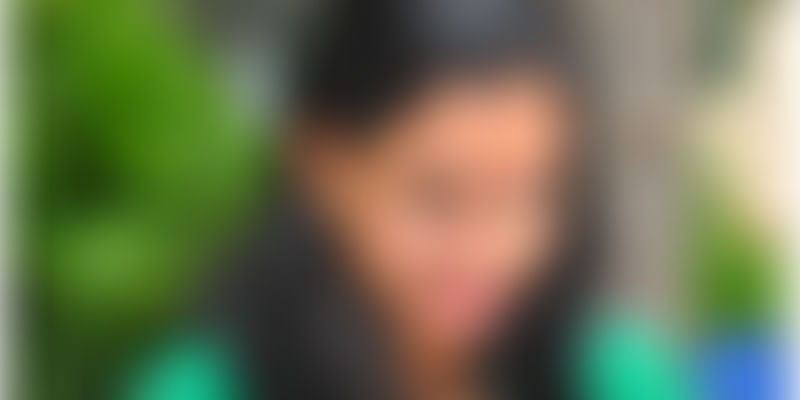 Cancer can be a traumatic time for the patient as well as their loved ones. And at a time like this, every worry or apprehension – right from choosing a course of treatment to loving your body as it undergoes a whirlwind of change – is equally valid and must be harmonised in order to overcome the tribulation, rather than just survive it. Sonali Srungaram, a techie who had always nursed a ‘what if’ for the field of medicine, decided it was never too late to return to her passion for the greater good of the 33 lakh cancer patients in the country.

On the other side of the phone...

Sonali Srungaram, 37, holds a B. Tech (Honours) in Computer Systems Engineering from Massey University in New Zealand, and a Post Graduate diploma at ISB. She jumped straight into a 12-year stint at Accenture,after her BTech, as a consultant for transformational projects for large multi-national corporations - working out of three home offices in three countries (New Zealand, India and UK)‑and eventually became an associate partner in their strategy consulting.

Her job was fulfilling, but she wanted to create something of her own. “I had started fleshing out ideas for my own firm as early as 2006, but never had the courage to quit. Finally in 2012, when the Indian entrepreneurial market was picking up, I told myself it was now or never,” she explains.

In her mind, whenever she thought entrepreneurship, she thought healthcare. “This was in a way a reconciliation, since I always doubted if I made the right choice by becoming an engineer instead of taking up medicine,” she says, adding,“and this was backed by my research. I noticed that most models were focussed on healthcare providers than patients. I felt that something had to be done for patients.”

Around the same time, one of her close kin was diagnosed with cancer and she noticed how fragmented the market was with respect to cancer-care.“I saw that though the doctors noticed symptoms, they constantly misdiagnosed the condition. So, I decided to work in the space of creating awareness and cancer prevention.”

This was the genesis of CIPHER Healthcare, in 2012. They first started by visiting MNCs for awareness drives. In six months, they accomplished 33 awareness sessions,which put them on the radar for around 50,000 people. “We even spoke to over 3,000 people on a one-on-one basis and assisted in the preventive screening of over 500 people,” she recalls.

During one such screening, they noticed that one of their subjects was in fact, testing positive for stage II breast cancer.“At this point in time, I realised that we had to deliver this difficult news to this person, but were not in any position to offer any further help thereafter. My conscience would not allow me to leave them in the lurch like this.”

This was the defining moment in the journey of CIPHER that birthed the idea of the Cancer Helpline – something she felt was rather similar to her consulting job, where a client came with a problem or a question, and they would find personalised solutions for them.

Healed, if not cured

Their nationwide free helpline service, on 18002002676, is available for cancer patients and their relatives Monday to Saturday from 10 am to 5 pm. For all the calls received outside of these time constraints, the team mandatorily calls back as soon as possible. The doubts could range from where the nearest cancer hospital is, to where one can get a wig for a loved one undergoing treatment. After all, when the cost of treatment is nearly Rs. 2.5 lakh, everyone could use a second opinion.

For example, someone from Ranchi once called in to find what the best hospital would be for the treatment of a specific kind of cancer along with the cost, schemes available and insurance details. Some call in to understand what they can do to prevent cancer after they have newly quit smoking. Several calls also stream in from desperate family members who get very worried looking at a patient going through the side-effects of the treatment.

“The key is that each case is unique, and our job is to provide the appropriate amount of empathy and information to each individual so that they are most empowered. We have even helped callers with body-image issues, with a simple ‘you are beautiful,’” says Sonali.

Sonali has put together a team of 21 people who are not from the medical background, but are passionate about medicine. They then undergo rigorous training by studying the research books on cancer as well as learning how to be empathetic towards the callers. Moreover, they never give direct advice or a treatment solution; a panel of doctors has joined them on a consultancy basis, and is available for an hour for any tricky inquiries. Even while making recommendations, no single hospital is recommended. “If someone is confused about two different procedures, we give them the breakdown of both the procedures so they are in the position to make an informed decision," says Sonali.

They have two methods of revenue generation. With the first, monetising their skill-set, they help other healthcare institutions create patient-centric models. “We have created helplines for other hospitals and have helped healthcare startups figure out their footing through market research,” she explains. Having no previously established models to emulate, this was accomplished with trial and error, and on a shoestring budget.

The other model was monetising traffic – which was a little tricky since it is difficult to convince people to pay for information.

In the two years since the Cancer Helpline has been active, over two lakh people have accessed their resources and over 21,000 people have approached them for personalised help –something she is immensely proud of. “In the last few months, we have had several offers of mergers and acquisitions, which validates that what we have built is valuable,” she says.

This might be one of those places where she was a supposed ‘outsider’, whose perspective wasn’t welcome. Not only was her passion questioned as a techie taking on a field that always had her heart, she was also doubted as a woman, taking on a man’s role of heading a company.

“It is tough for someone without a medical background to break into healthcare in India. This meant that we had to work harder to build our credibility in the industry. But, I also faced two-fold skepticism, as a woman entrepreneur. There are several biases out there,and a lot of people who believe that a male entrepreneur has more dedication to offer to his job, but a woman does not have the capacity for the same. These perceptions are tough to deal with. I am trying to find my way in this environment,” she candidly relates.

What keeps it going

Bootstrapped initially, she realised, over time, that there were people passionate about what she does, and hence opened the company to friends and family for a small round.“Currently, we are pushing for an angel round of funding to raise $500,000 to create the pilot and prototype for a new model we are coming up with,” she says.

This new model is the result of a small survey they conducted to understand if they met all the patients’ needs. “While they were extremely happy with our service, they still felt that they needed someone who could offer them direct support services. So, we established that the time had come for us to start providing direct services to patients instead of just connecting the dots,” she lets on.