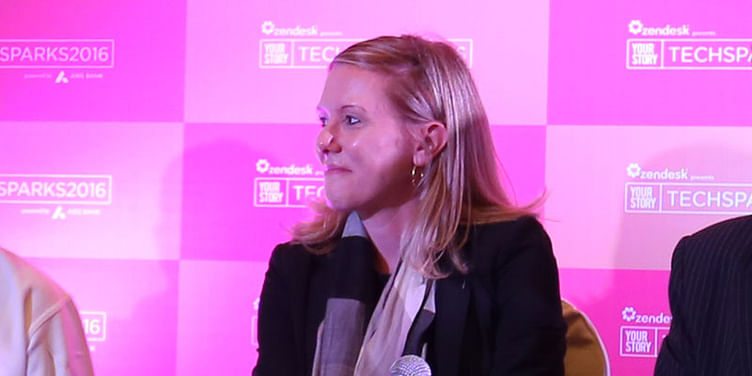 She has made India her home these last five years or so. An entrepreneur, Lizzie Chapman is the CEO and Co-founder of ZestMoney, a Bengaluru-based fintech startup.

Lizzie and the other two co-founders, Priya Sharma and Ashish Anantharaman, were colleagues at a UK-based finance company called Wonga, where Lizzie was India country head based out of Mumbai. The 35-year-old CEO now based out of Bengaluru is in charge of marketing and acquisitions at ZestMoney.

Lizzie has also served as the executive director of DBS Digital Bank, and was the first woman to be appointed a director on the board of IndiaMART, the online marketplace for SME players.

Speaking about the ‘new frontiers of fintech’ at a panel at the seventh edition of TechSparks in Bengaluru on October 30, we caught up with Lizzie to talk about women in fintech and banking, as well as her take on feminism in India.

Here are some excerpts from our conversation:

Lizzie finds it so much easier to do business in the financial sector here in India than in London. “In India, people have seen senior women in the banking world. They are used to senior women in positions of power and are okay being managed by a woman. Across the US and Europe that is not the case; even as a genuine partner in meetings I have been asked to pour coffee.”

Since Lizzie is the CEO of a fintech company, she highlights some interesting facts about women in the context of the industry. According to Lizzie, “Women are making the majority of purchasing decisions at home, especially in the kind of products that we deal in. More than 50 percent of financial consumers are women.”

Though the products are designed for women — the primary consumer when it comes to travel, furniture, and household appliances — Lizze says,

Female participation in the workforce, even at the higher echelons of society, show the dearth of salary accounts. The need for income tax or PAN number is a challenge for fintech companies. We are working very hard to use alternate data references instead of the traditional points of reference. This is a big challenge.

According to her, without salary proof and other documents, credit — whether offline or online — becomes a major challenge for women.

“The promise of fintech is that you can use alternative data to finance things without having to rely on your husband or another male member.

Also, as far as our products are concerned, women are just as much early adopters as men. Women have different credit behaviour, they are less risky borrowers, and they plan ahead and are cautious with their finances. That does not mean they will not accept fintech. We think we can build a large and long-term base with women; it just seems challenging right now because of these infrastructure issues, but we are working to fix that.”

In India you can be feminine

As someone who has not been born and raised in India, Lizzie provides a fresh perspective on women’s rights and feminism.

According to her, the women she works with in India are of a different ilk.

I do think feminism in India and the way women participate at the workplace and in society has potentially better chances of success than in Western cultures.

In India, Lizzie feels, “There is no pressure upon women to play at being masculine. Women are feminine and follow their passions. They are not driven to embrace masculinity and this diversity is really refreshing.”

According to Lizzie, “Indian women should not ape the very masculine and Western idea of feminism, but push for feminism without having to ape masculinity.”

Lizzie’s perspectives, especially on women leading in the banking industry and the state of feminism in India vis-à-vis Western culture, are interesting. Though Indian women face their fair share of challenges, Lizzie’s remarks serve to contextualise a lot of issues.