These 5 startups are helping tackle air pollution in India 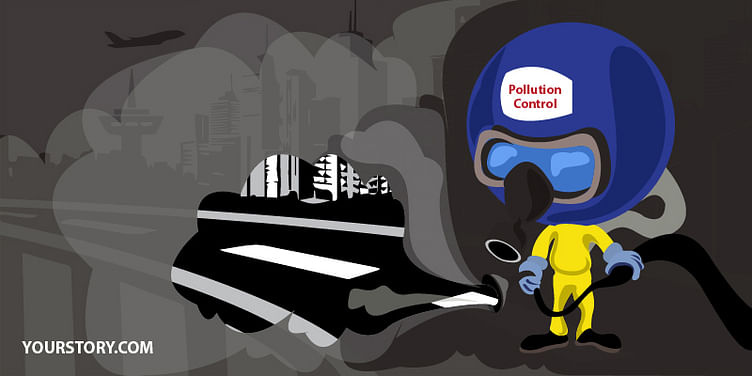 India’s air quality was contemplated as among the world’s worst over the Diwali weekend. The worst hit areas are reportedly the north Indian cities. The air pollution level in Delhi reached 40 times over the safe limits. Therefore, it’s high time to seriously address the adverse effects of air pollution in India.

Delhi-NCR is ranked as fifth among all the 32 megacities with population of 25.8 million. Delhi's air has been announced as most polluted air in the world in terms of percentage, according to a report of WHO. Unfavorable geographic location and meteorology, uncontrolled sources in its surrounding periphery and a number of unregulated and unaccounted sources within the city attribute are responsible for its bad air quality.

According to the data of Berkeley Earth, a US research organisation, Delhi, Uttar Pradesh and Bihar recorded PM 2.5 levels of over 500 µg/m³ – surpassing the pollution values on October 30 and 31 from 9 pm to the wee hours of the next morning.

“Mumbai witnessed a spike in pollution levels a day after Diwali as the AQI went up to 318, falling under ‘very poor’ AQI category. AQI levels between 201 and 300 fall under ‘poor’ category and 301-400 is ‘very poor’, indicating a health risk for people sensitive to air pollution,” said an Indian Express report.

Let’s have a look at the few initiatives taken by the startup fraternity to battle against air pollution:

Delhi-based Smart Air Filters produces an indoor air purifier that is highly effective against PM 2.5, the primary air pollutant affecting urban Indian cities. The startup claims that its H13 HEPA filter, which is used in the Smart Air Original DIY Air Purifier, captures 99.97 percent of PM 2.5 particles. For outdoor protection from pollution, the startup also retails N95 pollution masks that it claims are 95 percent effective in trapping PM2.5 particles. The company has its presence in China and Mongolia also.

The Hyderabad-based startup produces anti-pollution masks which are washable and reusable. It claims its products are far superior to the ones available in the market, such as surgical masks, kerchiefs, bandanas and scarfs. In the coming months, the startup aims to come up with more technically advanced masks which will be able to curb more harmful gaseous pollutants. At present, the startup is focussing on the retail market of highly polluted cities in the country to provide its citizens with an effective solution against harmful pollutants.

Bengaluru-based personal assistant app Helpchat this year launched a new feature that monitors the air in the surrounding environment and delivers a personalised air quality update via a mobile app.

The app will show the Air Quality Index (AQI) reading from 0 to 500+ (0 being the cleanest and 500 being the worst air quality), and suggests a precautionary measure depending on the air quality. The moment the app senses air quality getting below a certain point, it will send an alert to the user's smartphone. Additionally, it also suggests areas that one should avoid visiting in their city.

The AQI index shown by the app measures a number of volatile organic compounds (VOCs), carbon monoxide, and even cleaning agents or allergens that might affect the lungs or harm the health in the long run. Since pollution and its impact are directly linked with the weather conditions, the app also tracks the weather conditions and updates the users in real time.

Kurin Systems claims to have the most advanced filtration system with four levels of filtration – high-efficiency particulate air {HEPA H13} filter which collects 99.9 percent of airborne impurities, a carbon-activated filter which removes all poisonous gases along with a pre-activated filter, and woven cloth that remove all pollen, dust, pet dander, etc.

Assurance is a solution built on Intel® Edison board and powered by Intel® XDK. It is a cloud-connected mobile and web integrated system that predicts and monitors environmental parameters. This multiple-point pollution monitoring system will empower government functionaries and individuals to keep a check on air pollution and contribute to control it.

Paytm’s Founder and CEO Vijay Shekhar Sharma in a recent interview with NDTV pledged a fund of Rs 10 crore to build a network of startups that are working towards environment sustainability in India.

He even tweeted, “I am ready to fund and build network of startups/labs for environment sustainability in India. Today five cities' tomorrow 50 cities' problem.”