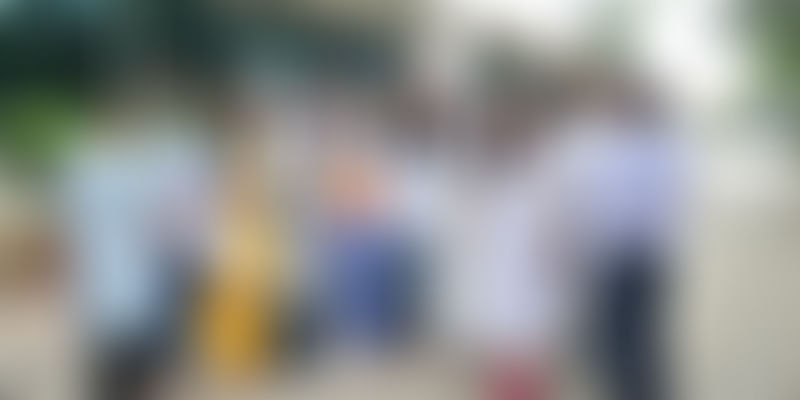 According to some estimates, around 2.8 crore students will write government and banking exams this year, the number having been on the rise steadily over the years, with further increases expected in the future.

30-year-old Gaurav Goel, a serial entrepreneur, sensed the opportunity in this market two years ago. He parted ways with his previous startup, Brainpulley, a venture offering e-learning courses for IT certifications, to launch a new education platform with whole new offerings.

In October 2014, with his colleagues Malay Sarkar (30) and Mehbub Hussain (30), Gaurav founded TopRankers. The original trio were recently joined by two further co-founders in Harish Goswami (29) and Himanshu Joshi (30).

In April 2015, after many pivots, TopRankers launched its platform, a Bengaluru-based online test preparation portal for government and banking exams like IBPS PO, IBPS Clerk, SSC CHCL and RRB NTPC, among others.

“We enable students to prepare for competitive exams through an innovative platform. We offer simulated tests and comprehensive study materials for all candidates appearing for examinations in the fields of banking, law and government, acting as their personal tutor,” says Gaurav, CEO of TopRankers.

The company operates on both the B2C and the B2B models, working with students in the former and with education institutions in the latter.

In its B2B segment, the company offers educational institutions TopRankers Edge, a SaaS (Software as a Service) product that allows these institutions to upload their content and study modules online.

Talking about the uniqueness of the platform, Gaurav says that he also offers a flagship mock examination on an all-India level, providing each student with a predictive all-India ranking. The parameter was made functional through intricate algorithms and technology-building. This feature is not available with any other player in the domain.

How it cracked the revenue model

Gaurav says that the platform was free for students between its launch and October 2015, with them being able to take mock tests. The plan had originally been to extend the reach of the platform as far as possible before proceeding to earn through advertisers.

However, within six months of operations, he found that the platform was appealing neither to students nor to advertisers, with him being able to acquire only 5,000 students during that time.

“We have observed that in this category, establishing a brand is very important. Free products are considered cheap and unworthy. We tried to revamp the platform, added lots of analytics, and turned it into a paid platform, where users had to pay to take those mock tests,” says Gaurav.

Now, the platform charges students between Rs 250 and Rs 1,500 for the tests.

Growth in the company

Initially, the venture invested Rs 20 lakh into building the platform, which was primarily used to develop innovative technology. The investment was self-funded.

Today, the team claims to have more than 90,000 users registered on their platform. Apart from Bengaluru, TopRankers also has offices in Bhopal and Delhi, with a team of around 50 professionals working across dedicated centres along with 60 freelancers.

According to TopRankers, it has more than 50 recognised names from across 18 Indian cities on its B2B client list, and is planning to expand to 50 more cities in the coming year.

“We are aiming to reach a base of 15 lakh registered users in the next 18 months from the B2C side, with plans to tie up with 1,500 coaching centres for our B2B model,” says Gaurav.

According to Bloomberg, India is at the centre of a revolution in learning, with an e-learning market that is projected to grow at 18 percent CAGR - twice the global average. India also has one of the highest growth trajectories in self-paced e-learning at 55 percent.

A report by IBEF suggests that India is aiming to create 500 million skilled workers by 2022.The online education sector in the country is expected to touch $40 billion by 2017, and the FDI flow into the sector between April 2000 and January 2015 has been over $1 billion.

During September this year, education startup Byju’s announced raising $50 million in a round co-led by Mark Zuckerberg and Priscilla Chan’s investment arm The Chan Zuckerberg Initiative (CZI) and Sequoia Capital, along with investments from Sofina, Lightspeed Ventures and Times Internet Ltd.

With Byju’s, Simplilearn, Embibe and Toppr being just a few among several players in the space, it seems that Indian edtech startups are finally getting the international attention they deserve. Last year, Simplilearn acquired Silicon Valley-based Market Motive in a $10 million deal.

According to experts, the competitive examinations market in India is estimated to be worth $6 billion, and with every exam going online, it is likely to grow exponentially in the future. With so much potential for development in this segment, the online competitive examinations market will certainly be an interesting sector to watch in the coming years.